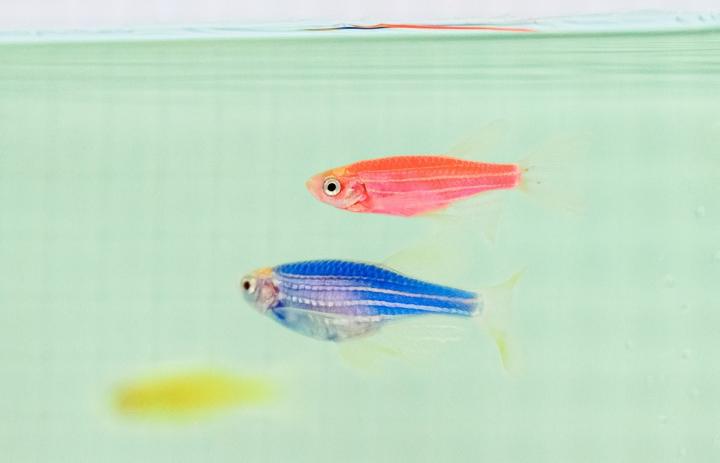 A team of researchers led by MIPT’s Allan Kalueff has studied chronic stress in zebrafish and determined that the animal can serve as a valuable model species for research into the associated brain diseases, complementing research currently done on rodents. The paper was published in Scientific Reports.

The zebrafish, also known as Danio rerio, is a freshwater fish from the minnow family. It got its name for the stripes on its body. Zebrafish are widely used as a translational model in genetics, molecular biology, embryology, pharmacology, and — more recently — in neurobiology. Their use as lab animals was pioneered in the ’60s by U.S. biologist George Streisinger.

The zebrafish offers a number of advantages over other vertebrates. It exhibits fast embryo development, evolving from an egg to larva in just three days. It is fairly large, tough and resilient, in addition to being transparent and developing outside the mother’s body, allowing for easier observation and manipulation. Many internal organs of zebrafish, particularly the cardiovascular system, function in a similar way to humans, and this is also true about the signaling pathways. Overall, we share 87% of our genome with zebrafish. All of that enables biomedical researchers to extrapolate their findings from zebrafish to humans, enabling reliable studies of drug toxicity and more.

Zebrafish have emerged as a popular model animal in neurobiology, because both hatchlings and adult fish exhibit fairly complex behavior. The research team led by Kalueff joined forces with biologists from St. Petersburg State University (SPbU) and Almazov National Medical Research Center, Russia, to model prolonged chronic stress on zebrafish and identify the molecular changes in the body that accompany this condition. The study demonstrated that zebrafish are an adequate translational model for researching complex neurobiological conditions. The scientists also collected data that may prove useful to those developing treatment options for patients with chronic stress.

5 weeks of stress, then treatment

Mounting evidence from research on mental disorders points to them as a risk factor contributing to the development of other serious and sometimes incurable pathologies. This prompts scientists to investigate the nature of these diseases and their development.

In the study reported in this story, neurobiologists modeled chronic unpredictable stress lasting five weeks. The team stressed a group of lab fish by unexpectedly disturbing it, and monitored the complex behavioral response. Eventually the zebrafish were diagnosed with an anxiety-like condition and serotonin metabolism deficit.

“The fact that the drug had a positive effect in fish does not directly translate into the same response in humans. It is necessary to run many experiments and use a number of test systems to prove that the zebrafish is indeed a suitable translational species to transfer such findings to humans,” commented Allan Kalueff, the study’s principal investigator and a leading researcher at the MIPT Laboratory for Cellular and Molecular Biology and Neurobiology; an SPbU professor. “Our study has shown that it’s possible to induce prolonged chronic unpredictable stress in zebrafish, with the condition confirmed by all available methods of evidence-based and molecular biology. This means that Danio rerio is susceptible to stress and exhibits behavioral symptoms similar to those observed in higher species.”

The stressed zebrafish in the study were given a common antidepressant called fluoxetine for 11 days, with the resulting neurochemical and behavioral changes closely monitored. The drug reduced the symptoms, and its action was also confirmed via transcriptomic, behavioral, and biochemical analyses.