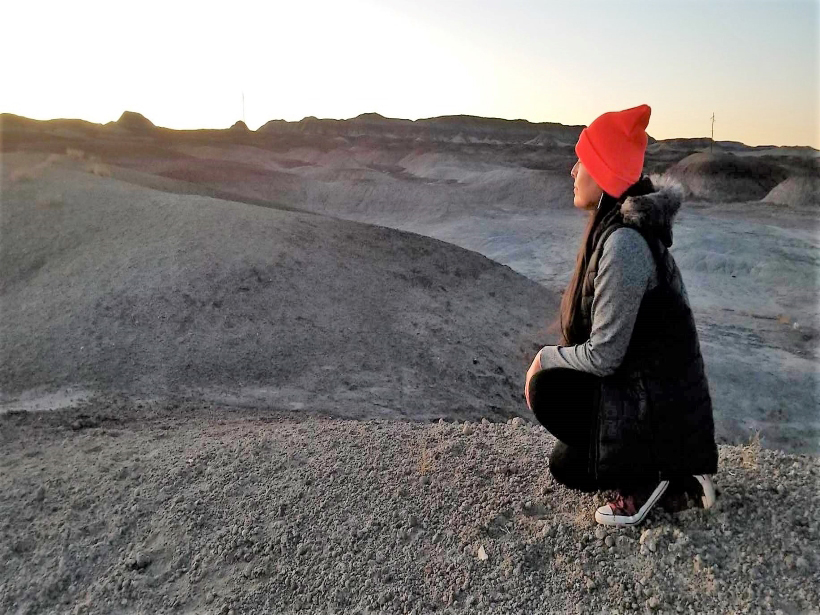 Amid the politicization of environmental policy in the United States, there has been increasing discussion of the hazardous effects of mining on human health. The historical legacy of uranium mining in the West, for instance, has left Indigenous communities susceptible to health conditions, including lung cancer.

There have been few studies, however, evaluating the potential health effects of mining on medicinal plants, which are crucial aspects of Indigenous culture. In a new project, a team from the University of Arizona led by Richelle Thomas seeks to identify the effects of arsenic and uranium on the traditional medicinal plants Salvia (an inhalant) and Thelesperma (a tea additive) and the ensuing effects on human organs. The team was recently awarded the MIT Solve Indigenous Communities Fellowship and is starting greenhouse studies next year. Thomas will present an outline of the project at AGU’s Fall Meeting.

There are more than 500 abandoned uranium mines across the Navajo Nation. Identifying an additional uranium exposure pathway “which has not been fully and deeply investigated…that’s very unique and important.”

Utilizing analytical chemistry and biological techniques, the team will quantify metalloid concentration in plant and soil samples. Researcher Gilberto Curlango-Rivera studies these concentrations in the root systems of plants. “Root systems have specialized cells that interact with microorganisms in the soil and also with abiotic factors such as metals,” he said. “My interest is to see how roots and these metals interact to offer possible solutions to contamination.”

Karletta Chief, a Diné hydrologist and associate professor at the University of Arizona, noted that there is not a lot of scientific investigation related to the chemistry of metalloid uptake in medicinal plants, despite the fact that those plants are very sacred and important to Indigenous communities. “Combining that with the fact that there are over 500 abandoned uranium mines across the Navajo nation, [identifying an] additional exposure pathway which has not been fully and deeply investigated…that’s very unique and important,” Chief said.

Thomas worked with sage, a plant widely used for ceremonial purposes, as part of her master’s thesis. For her Ph.D., she wanted to expand her focus to medicinal plants that are widely available. “Navajo tea is even commercially available now,” Thomas said. By studying medicinal plants that are also commercially available, Thomas hopes her research will have a far-reaching impact that will raise awareness inside and outside Indigenous communities.

Thomas’s research interest stems from her family background. “My maternal grandfather was a traditional Navajo practitioner,” Thomas said. “Before his passing, he was asking about the influence of heavy metals on the environment as well as people.”

Thomas strives to translate her findings “not just to the scientific community, but also the people who are directly impacted—medicine men and women, communities, and anybody who purchases it in the public.”

Thomas views her work as following in her grandfather’s footsteps, combining a Westernized laboratory-based approach with Indigenous perspectives. Her sister Meredith Lynn Thomas, cultural advocate and research assistant on the project, said that their grandfather emphasized combining scientific and traditional perspectives and utilizing them proactively. Richelle strives to translate her findings “not just to the scientific community, but also the people who are directly impacted—medicine men and women, communities, and anybody who purchases it in the public.” She emphasized the need to communicate risks in an accessible way, rather than giving people a number that they as nonscientists may not understand. “She had the community involved from the get-go,” Meredith said. “She took that first step as a responsible researcher to get their consent.”

Many current researchers are non-Native and don’t share their findings, resulting in some Indigenous communities being hesitant to participate. Thomas’s study is “very unique because you have a Native American female who’s very rooted in her community, her culture, her tradition, and language doing cutting-edge research and using scientific tools to address a very culturally based research question,” said Chief. “Richelle is very grounded in the ethics of doing this type of research, especially considering that it’s a sacred medicine and that it has to be protected.”

Thomas plans on involving traditional practitioners closely in her findings. “Working with the Navajo, like any minority population, requires a different approach,” she said, and cultural sensitivity is critical. “I’m taking a very big piece of the belief system [medicinal plants] and saying it’s potentially dangerous,” Thomas said.

Team member Robert Root emphasized the importance of developing trust with various stakeholders and serving as a liaison. “Wherever it leads, they’ll be empowered to make decisions based on her translation of the research,” Root said.

Thomas hopes for positive change in federal Indigenous policy with the incoming Biden administration but emphasizes the importance of implementing change from the ground up: “It really needs to start from a grassroots level with traditional practitioners, then become adopted at the tribal level, and then hopefully it turns into something bigger.”

“Not every tribal member out there is the same…so it’s really important to engage with all the different tribal members within a community.”

Chief echoed this sentiment: “[Every step of the research process] has to involve community members, tribal leaders, educators, and grassroots activists so it can be a multidimensional, deep engagement,” she said. “Not every tribal member out there is the same…so it’s really important to engage with all the different tribal members within a community.”

The team will develop environmental justice guidelines that can be transferable to other Indigenous peoples and used to craft policy. Ongoing environmental injustice faced by diverse Indigenous communities demands awareness, the team emphasizes. “Many people are not even aware that [we] exist,” Thomas said. “They are not aware of their struggles or how we can help them. A lot of that comes from self-reflection. History has never really been written in the books, and even the issues we have today are not really well known.”