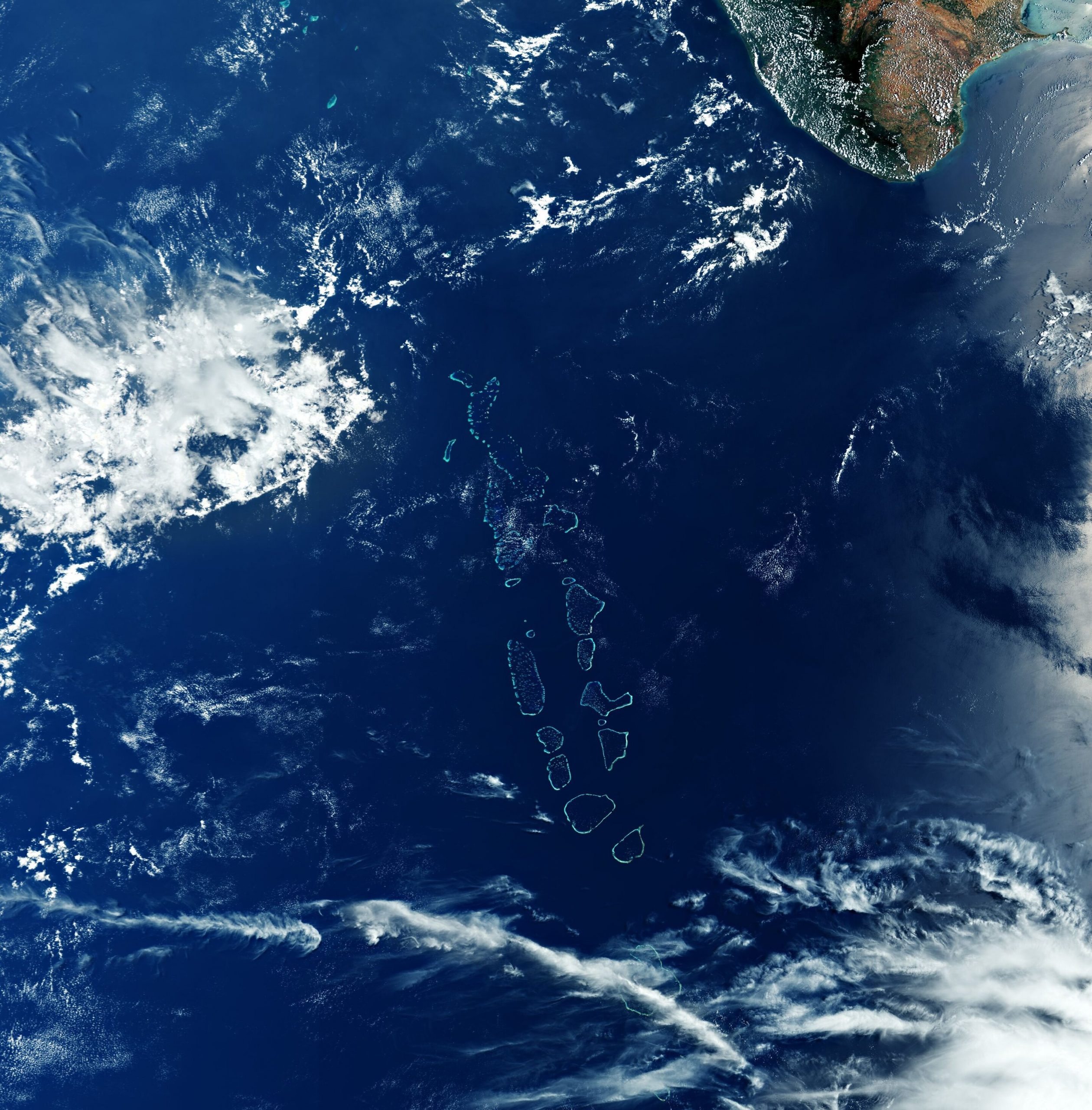 All 1200 islands that make up the Republic of Maldives are featured in this spectacular image captured by the Copernicus Sentinel-3 mission.

The ocean and color instrument onboard the Copernicus Sentinel-3 mission has a swath width of 1270 km which allows us to enjoy this wide view of the Maldive Islands and its surroundings. A popular tourist destination, the Maldives lie in the Indian Ocean, around 700 km southwest of the southernmost tip of mainland India, visible in the top-right of the image.

The nation consists of a chain of small coral islands that are grouped into clusters of atolls—visible as circular or oval-shaped reef structures in the middle of the image. Scattered across 90,000 sq km of ocean, the Maldives are one of the most geographically dispersed countries in the world. The islands extend more than 820 km from north to south and around 130 km from east to west.

Most atolls of the Maldives consist of a large, ring-shaped coral reef supporting numerous small islands. In this image, captured on 29 March 2020, the Huvadhu Atoll and Addu Atoll are partially covered by clouds (visible in the bottom of the image).

Different cloud formations can be seen dotted around the image, the difference in appearance is most likely due to the different height above the surface. The Maldive archipelago is frequently covered by clouds, making this almost cloud-free image quite rare.

One of the world’s lowest-lying countries, more than 80% of the Maldives’ land is less than one meter above mean sea level, making its population of over 500,000 people extremely vulnerable to sea swells, storm surges and severe weather. The Special Report on the Ocean and Cryosphere in a Changing Climate on sea level rise states that the global mean sea level is likely to rise to around 1m by the end of this century, which could ultimately cover the majority of the nation.

Scheduled for launch on 10 November from the Vandenberg Air Force Base in California, the Copernicus Sentinel-6 Michael Freilich satellite is the first of two identical satellites to be launched sequentially to provide accurate measurements of sea-level change.

In order to better understand how rising seas will impact humanity, scientists and researchers need long climate records. Copernicus Sentinel-6 will take on the role of radar altimetry reference mission, continuing the long-term record of measurements of sea-surface height started in 1992 by the French-US Topex Poseidon and then the Jason series of satellite missions. By continuing this time series, Sentinel-6 will allow for further climate research and help scientists monitor the effects of climate change.

More information:
Special Report on the Ocean and Cryosphere in a Changing Climate: www.ipcc.ch/srocc/
Provided by
European Space Agency