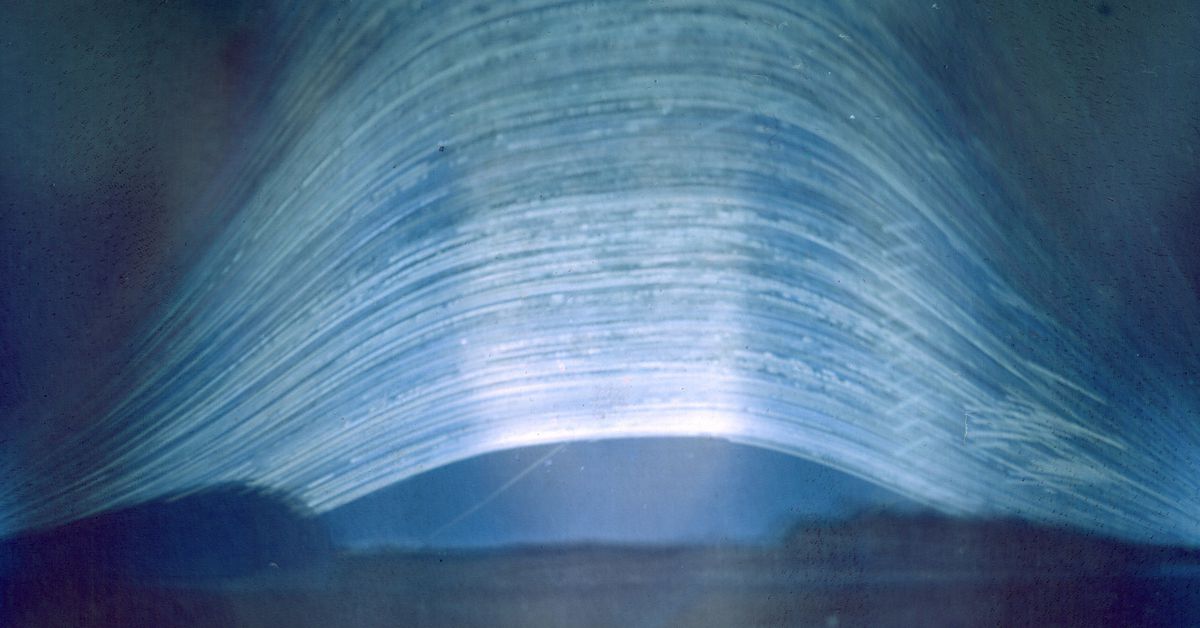 The lines across the sky show the sun’s path. The speckles in the lines show where clouds obscured the sun. (University of Hertfordshire/)

You don’t need a lot of fancy materials to make a very basic camera. Whether it’s an old coffee can or a discarded oatmeal container, you can put some photosensitive paper in the back, poke a small hole in the front to act as a lens, and then leave it somewhere to capture photons. While those DIY cameras are typically fun, they also don’t usually last very long. Recently, however, former photography student Regina Valkenborgh showed off a pinhole image that took more than eight years to create.

Valkenborgh built the DIY camera out of a simple beer can and a piece of photographic paper inside to capture the sun as it appeared to travel across the sky every day over the astronomical observatory at the University of Hartfordshire.

Each line that arcs across the sky in the picture represents the sun’s path on a given day. It moves up and down in the sky depending on the season. The image was captured over a total of eight years and one month, which could be the longest single exposure captured to date.

Because the aperture—the hole through which light comes in—is so small, the camera doesn’t require any kind of focusing. The sun renders as a tiny point of light that draws a line across the paper as it appears to move.

Unlike typical film, photographic paper tends to expose more slowly, even though it’s using a similar chemical process. Paper is typically used with an enlarger—a device found in the darkroom that projects an image through a photographic negative onto a sheet of paper for printing.

While most printing paper creates a negative image (a negative of a film negative translates into a positive image), there are some available materials like Ilford’s Harman paper, which produce positive pictures.

According to a release from the University of Hertfordshire, Valkenborgh had attempted several other short exposures, but lost her work to moisture or other environmental factors. Leaving the camera in place for eight years was a fortunate mistake.

Some artists, however, intend to leave pinhole cameras even longer. Artist Jonathan Keats, for instance, created a copper camera with a 24k gold aperture that he hopes will capture a single exposure that lasts a thousand years and captures the effects of climate change on the landscape. It’s unlikely it will ever get developed 1,000 years from now, but it’s a thought-provoking project.

If you want to try out pinhole photography, several companies sell complete kits with almost everything you need to get started. For $99, you can get the Ilford Obscura pinhole kit that comes with a pre-built camera, as well as film and negative paper depending on how you want to capture the image. You’ll need some chemicals to process the negatives or positives as well.

For $20, you can get a Solarcan, which literally looks like a can pre-loaded with photographic paper meant to capture images much like the one Valkenborgh shot. Though, you’ll likely want to pull it out far sooner than eight years if you don’t want it to get ruined.

If you’d prefer to stay away from chemical processes completely, various companies sell pinhole lenses that attach to DSLRs and give a similar lo-fi, no-focus look. Of course, your DSLR battery life will limit the amount of time you can spend capturing a single shot, so getting sun trails like this is better done with film or paper.

And if you’re feeling particularly creative, you can make a DIY camera out of pretty much anything, including an egg, or even a human skull.