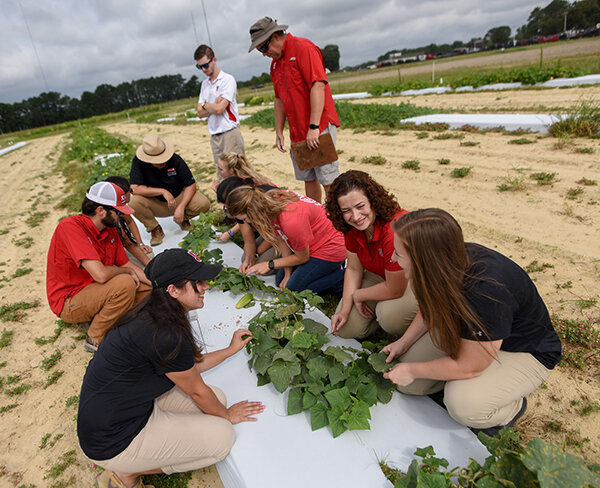 Cucurbit downy mildew is a devastating disease for the United States cucurbit industry, which includes cucumbers, watermelon, squash, and pumpkin. The disease has caused major losses in North Carolina, which has significant cucumber and watermelon acreage. To help growers better manage this disease, a group of plant pathologists at North Carolina State University sought to better understand the biology of the pathogen that causes downy mildew.

They determined that the causal pathogen, Pseudoperonospora cubensis, has two genetically distinct host-adapted clades and also found that wild cucurbits can serve as reservoirs for this pathogen. Clade 1 isolates more frequently infect squash, pumpkin, and watermelon while clade 2 impacted cucumber and cantaloupe. They also found that evidence of recombination in clade 1 isolates but not clade 2 isolates.

“Overall, our findings have important implications for disease management because clade-specific factors such as host susceptibility and inoculum availability of each clade by region may influence pathogen outbreaks in different commercial cucurbits, timing of fungicide applications, and phenotyping for host resistance breeding efforts,” explained lead author Emma Wallace.

“It was surprising to us to find two host-adapted clades with such distinct genetic differentiation and only one clade showing evidence of recombination. We were also surprised that wild cucurbits can become readily infected by one or both clades, especially since some of those wild cucurbits are widespread in the United States and some are perennial,” added co-author Kimberly D’Arcangelo.

While previous research had shown evidence of two subpopulations within the pathogen, none were able to identify the main factors underlying those populations due to sampling limitations. Using a population genetics approach, Wallace and her colleagues applied a robust and standardized sampling strategy to investigate P. cubensis populations that infect wild cucurbit hosts.

“Our findings will have significant impacts on the adoption of crop-specific management practices,” said corresponding author Lina Quesada. “Current disease management recommendations are provided under the assumption that P. cubensis isolates were somewhat uniform. However, this paper and related projects have revealed that the two clades can have important biological differences, such as host preference, that are relevant when thinking about how to manage disease.”

Moving forward, plant pathologists will have to provide crop-specific recommendations as opposed to using the same approach for all cucurbit crops infected with downy mildew. For more information, read “Population Analyses Reveal Two Host-Adapted Clades of Pseudoperonospora cubensis, the Causal Agent of Cucurbit Downy Mildew, on Commercial and Wild Cucurbits” published in the September issue of Phytopathology.