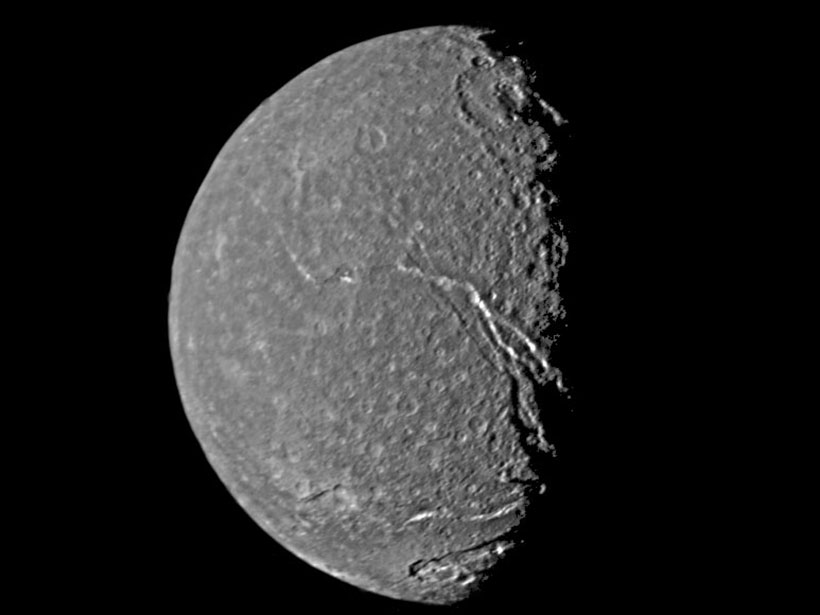 Updated to clarify the limitations of Galileo’s measurements.

The solar system is rife with tiny, icy worlds. Many of them are moons of the gas giant planets and have been confirmed or are suspected to have liquid oceans beneath frozen ice shells. Jupiter’s moon Europa and Saturn’s moon Enceladus are two of the more famous examples of such worlds. Why wouldn’t some of the moons of Uranus and Neptune, the solar system’s ice giant planets, have subsurface oceans too?

Most planetary scientists agree that there’s no reason why not, and a team of researchers found that a tried-and-true method of confirming the existence of subsurface oceans would work especially well for the moons of Uranus.

“The big question here is, Where are habitable environments in the solar system?”

“The big question here is, Where are habitable environments in the solar system?” said Benjamin Weiss, a planetary scientist at the Massachusetts Institute of Technology in Cambridge. The discoveries of oceans on Europa and Enceladus “make a lot of us wonder whether there are many moons out there that, although they’re small, may still be warm.” Weiss will be presenting this research on 15 December at AGU’s Fall Meeting 2020.

During Voyager 2’s flyby of the Uranus system in 1986, it sent back to Earth the first (and so far only) close-up views of the planet’s five largest moons—Miranda, Ariel, Umbriel, Titania, and Oberon. Those images revealed that the moons are made of a roughly 50:50 combination of rock and ices and, like most planetary satellites, have many craters. However, the moons’ surfaces also display some of the classic signs of cryovolcanism, like fresh uncratered material and ridges, valleys, and folds.

As with Europa and Enceladus, a subsurface ocean is one way to create those signs of recent geologic activity. Weiss and his team wanted to know whether a future spacecraft could discover such an ocean.

The researchers calculated the strength of the magnetic field Uranus would induce on a moon’s hypothetical subsurface ocean and determined whether a future mission orbiting the planet would be able to detect that induced field. This is the same technique scientists with NASA’s Galileo mission used in 1998 to confirm the presence of a subsurface ocean on Europa and also on Jupiter’s moon Callisto.

Using theoretical models of Uranus’s magnetic field, Weiss’s team calculated the strengths of the fields induced on Miranda, Ariel, Umbriel, Titania, and Oberon. The team found that Miranda’s induced magnetic field was the strongest, at 300 nanoteslas, and Oberon’s was the weakest, at just 3 nanoteslas. For comparison, the Galileo mission measured an induced magnetic field of about 220 nanoteslas at Europa and about 40 nanoteslas at Callisto. A subsurface ocean on Miranda, Ariel, Umbriel, and Titania would be well within the measurement capabilities of current spacecraft technology, Weiss said, although Oberon’s field might be right on the edge of detectability.

Magnetic induction confirmed the presence of Europa’s and Callisto’s subsurface oceans, but Jupiter’s very symmetric magnetic field made it impossible for the Galileo mission to figure out the oceans’ depth, thickness, or salinity with its small number of flybys. The same is true of Saturn’s magnetic field and Enceladus’s subsurface ocean. But measurements of those properties might be possible for moons of Uranus.

“The key is that Uranus’ field is non-spin symmetric, unlike Saturn’s, and it rotates. We know these things, so [the technique] should work,” said David Stevenson, a planetary scientist at the California Institute of Technology in Pasadena and a member of the Galileo team. Stevenson was not involved with this research. “The caveat is magnetospheric effects [of Uranus], which are not yet well characterized but are unlikely to kill the idea.”

Detecting a signal would be “actually easier and more reliable” than other methods that might find an ocean.

However, Stevenson cautioned, subsurface oceans in the Uranus system are likely to be farther beneath the surface than those in the Jupiter system simply because Uranus’s moons are colder and so the icy shell is likely thicker. Although that might make the measured field weaker than estimated, he said, detecting a signal would be “actually easier and more reliable” than other methods that might find an ocean.

Uranus and Neptune are higher-priority targets for a spacecraft mission than they have been in the past because an opportune launch window opens up in the late 2020s. NASA, for example, is considering a Neptune mission called Trident, although no mission to Uranus is currently under consideration. However, “getting close enough to one or more of the satellites to see this—you have to get close, meaning within a satellite radius, roughly—is unlikely to be a feature of an early…mission to Uranus,” which likely wouldn’t arrive before 2042, Stevenson said.

A mission to an ice giant might be far off, Weiss admitted, but he hopes that this research “stimulates people to look even more seriously at the idea of sending a magnetometer investigation to Uranus or Neptune.”