Dog ticks may bite humans more as the climate changes 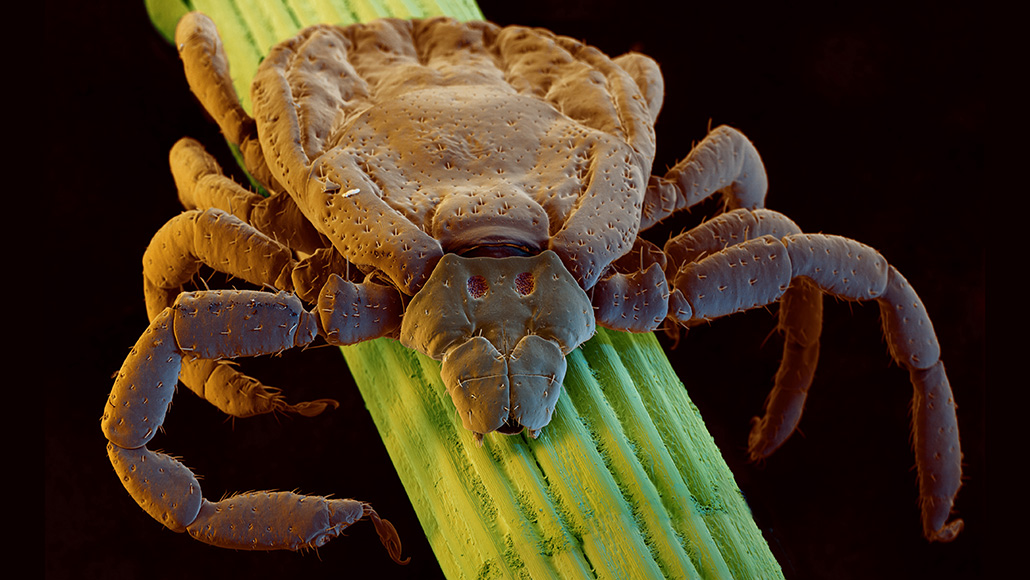 Climate change could turn some dog ticks into suckers for humans instead of canines.

At temperatures around 38° Celsius (100° Fahrenheit), some brown dog ticks were more attracted to people than to dogs, experiments show. The ticks can carry the pathogen that causes deadly Rocky Mountain spotted fever. The finding suggests that a warmer climate could lead to greater spread of the disease from ticks to humans, researchers reported November 16 at the annual meeting of the American Society of Tropical Medicine and Hygiene.

“We can expect more frequent and larger disease outbreaks of Rocky Mountain spotted fever when hot weather occurs, and when we get hot weather more often,” says Laura Backus, a researcher at the University of California, Davis School of Veterinary Medicine. Patients with Rocky Mountain spotted fever can die if they don’t receive antibiotic treatment within five days. Around 5 to 10 percent of people infected succumb to the disease.

Previous research in Europe had suggested that ticks are more aggressive toward people in hot weather. To find out whether brown dog ticks’ preference of host depends on temperature, Backus and her colleagues captured babies and adults of two genetically distinct groups, or lineages, of the species Rhipicephalus sanguineus. One lineage hailed from a hot region in Arizona, and was considered a tropical tick. The other lineage, from Oklahoma, tolerates colder weather and is considered temperate.

The scientists compared the ticks’ behavior at a room temperature of 23° C (74° F) and at a sweltering 38° C. In 10 separate trials at each temperature, the scientists placed around 20 ticks from both lineages and age groups into the center of a plastic tube and gave them the option of moving toward a either a human or a dog.

Normally, the tick prefers dogs to humans. But at the higher temperature, the adult tropical ticks showed a preference for the human. More than twice as many of the ticks moved toward the human at the hotter temperature compared with at room temperature. The temperature shift did not have a significant effect on the temperate ticks or the nymphs of either lineage.

It is unclear why the adult tropical ticks switched their preference at high temperature. It may have something to do with the way they sense their hosts. “It is possible that their chemical receptors on their bodies are activated differently at high temperatures, but it’s still unclear,” Backus adds.

In the last two decades, the United States has seen a steady rise in tick-borne diseases (SN: 11/15/18). In 2000, there were 495 cases of spotted fever rickettsiosis, a category that includes Rocky Mountain spotted fever, the U.S. Centers for Disease Control and Prevention reports. Now, 4,000 to 6,000 tickborne spotted fevers are reported in the United States each year.

Different kinds of ticks can carry the bacteria that causes Rocky Mountain spotted fever. But the brown dog tick is responsible for the spread in the southwestern United States.

“The finding is very exciting, as it demonstrates the behavioral difference between the two lineages,” says Kathleen Walker, an entomologist at the University of Arizona in Tucson who was not associated with the study. More tropical ticks, she adds, are moving to the north as temperatures rise due to global warming.

Backus says that her team would like to study brown dog ticks from more regions in the future, a step toward having a bigger dataset to look for patterns. “And if they prefer humans at high temperatures, as this study finds, then that helps in understanding why we are seeing more Rocky Mountain spotted fever outbreaks,” she says.