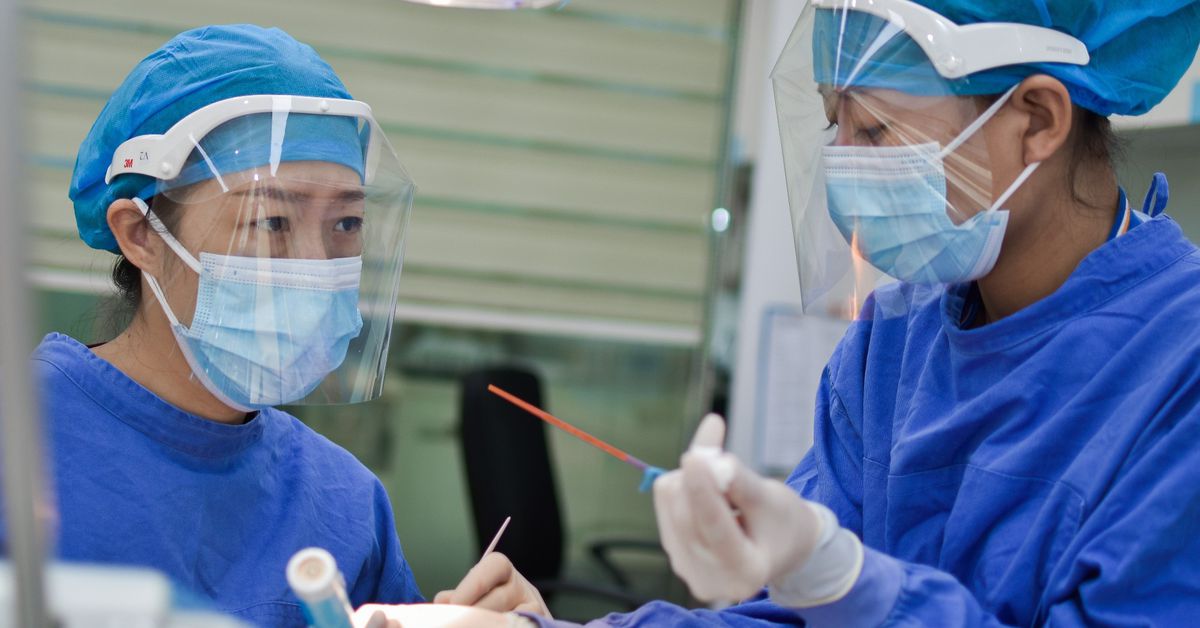 The results of a new survey from the American Dental Association suggest that, earlier in the pandemic at least, dentists caught COVID-19 far less often than was expected. (Unsplash/)

By now, most of us know that one of the ways COVID-19 is spread is by aerosols: droplets both large and small hanging in the air from our exhalations. Because of this, earlier in the pandemic, public health professionals feared that dentists and dental staff, as well as their patients, would be particularly vulnerable to the virus’s spread.

In June, study authors sent out the survey to about 5500 ADA members in June. “Our response rate was about 40 percent, which for an email survey was very high,” says study author Cameron Estrich, who is a health research analyst in the American Dental Association’s Science Research Institute. She was expecting a response rate of about 20 percent, she says. “I think it speaks to the high level of concern dentists have about this subject.”

The almost 2200 respondents answered questions about their COVID-19 infection status. In order to help address the fact that getting COVID-19 tests is not always simple, the researchers also asked about whether the dentists’ healthcare provider suspected they might have COVID-19 based on symptoms. The survey also asked about what kind of activities, including at work and outside of work, they were doing, and what kind of enhanced security they had put in place at work to prevent infection transmission.

When she wrote the survey, Estrich says, there was a lot of conjecture both good and bad about the likelihood of COVID-19 infection among dentists. On the one hand, she says, dentists were theoretically being exposed to more aerosols directly from patients’ mouths; on the other hand, dentists were already used to using PPE in their practices and better equipped than many other healthcare-related businesses to set up enhanced sanitation measures. As a result, when the survey was sent out, Estrich says, “I had no idea what [infection rate] we were going to get.”

Of the approximately 2200 dentists who responded to the survey, just 20 (about 1%) reported contracting COVID-19. The report is a snapshot of American dentistry as it stood in June, during a period when dental practices were starting to see more patients. Ninety-nine percent of the respondents also reported using enhanced infection control measures like pre-screening patients and using extra disinfection measures.

Although these published results only offer a moment in time, Estrich says the survey is ongoing and infection rates have remained below one percent in the respondents. One limitation of the study, however, is that dentists are self-reporting and may not even know they have COVID-19 if they are asymptomatic. “It’s possible this is an underestimate,” she says. She hopes to have a more complete picture of infection rates after gathering six months of data. Still, if that number or even a similar one holds up for the entire population of American dentists, it would place their infection rates much lower than might be expected for healthcare workers.

“It’s a good study,” says JoAnn Gurenlian, a professor of dental hygiene at Idaho State University and chair of the American Dental Hygienists’ Association’s COVID-19 task force on the return to work. “And it’s an interesting one, because this would have occurred about when dentists were returning to work.” However, Gurenlian says, she is eager to see the followup data.

She also says it’s worth surveying dental team members, such as hygienists, “to corroborate the information” gathered in the survey of dentists. The American Dental Hygienists Association is now collaborating with the ADA survey team to survey hygienists.

Based on the results of this report, says Gurenlian, “patients should have a high level of confidence in returning to the dentist.” It shows that dentists are demonstrating concern for their patients and using appropriate PPE, she says. What’s more, it shows that the level of infection among dentists is not as high as some feared it might be earlier in the pandemic.

But as we head into the first full winter of this pandemic, with attendant rises in infection rates in many places in the country, she says, dental professionals—and everyone—needs to remain concerned about COVID-19. “We need to be ever more vigilant as we go into the fall and winter season.”

This article has been updated to provide additional information about the potential risks dental patients might face.