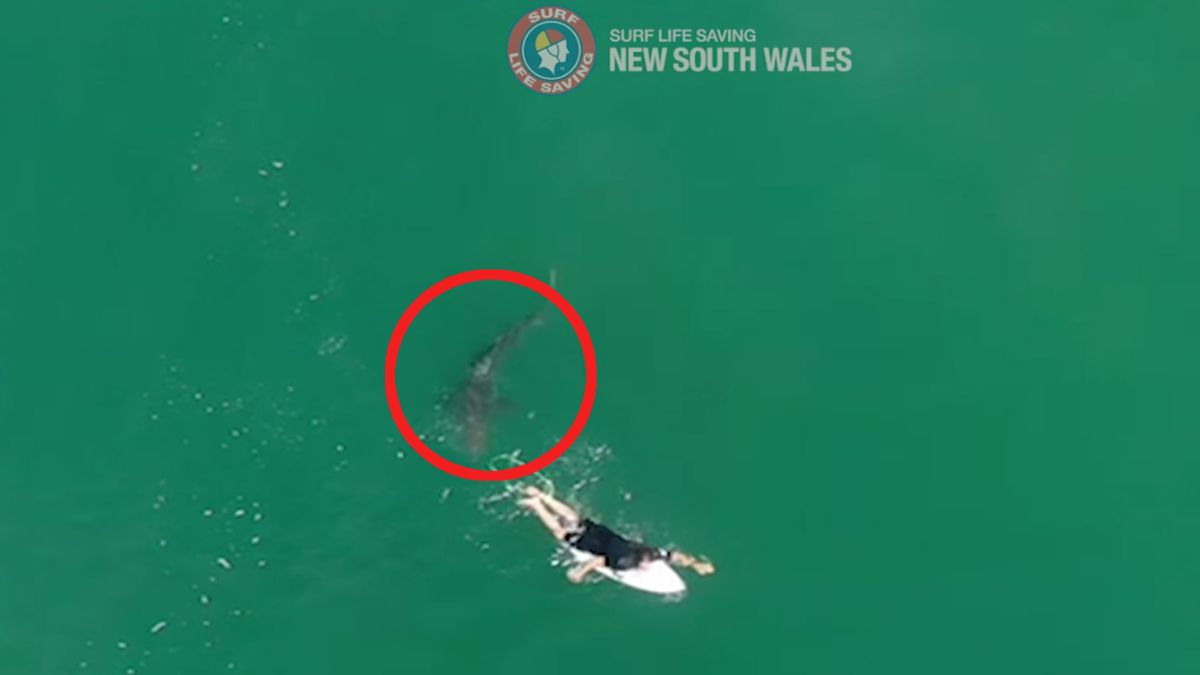 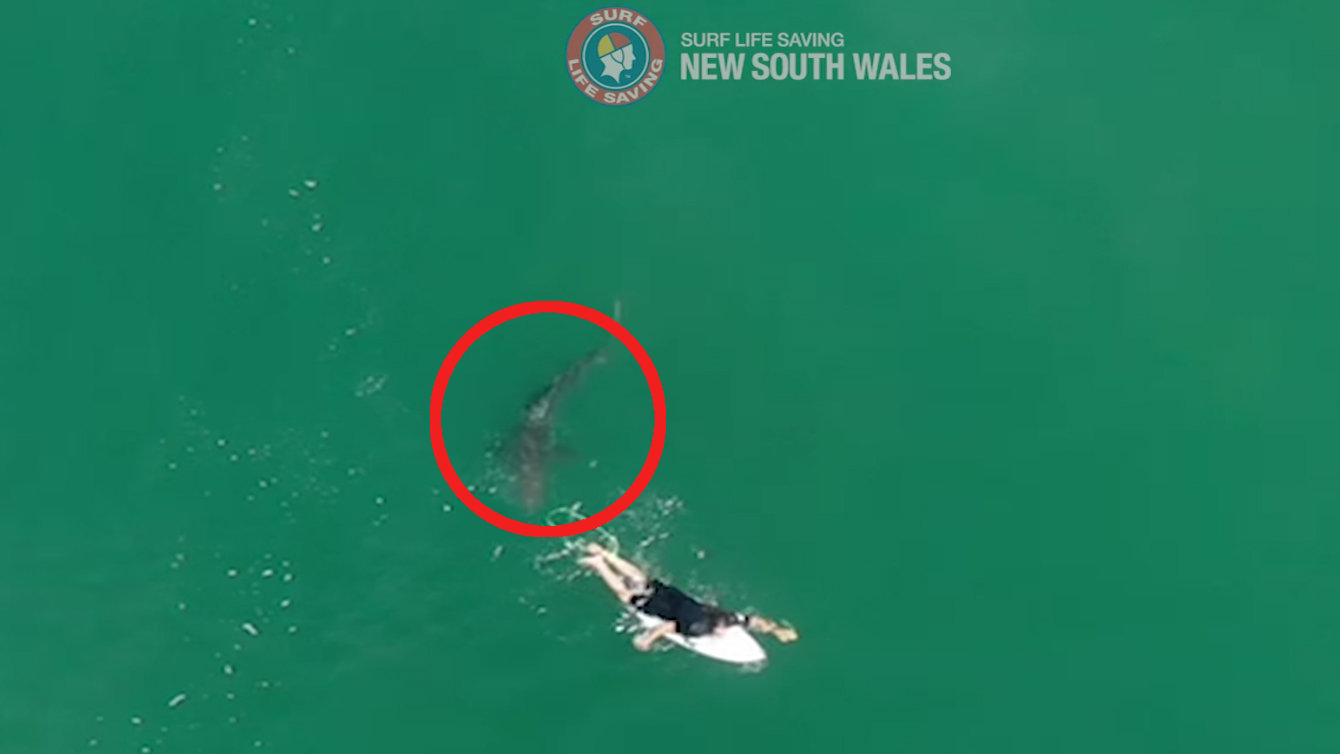 A drone camera caught a close encounter between a surfer and a white shark off the coast of New South Wales, Australia, last week.

The surfer and the great white shark seemed mutually spooked by their brush with each other — though in the surfer’s case, the shock came after he swam ashore and saw the drone footage. He would have otherwise never known that a 4.9-foot (1.5 meters) shark came within inches of his legs.

“I was surfing out the back at Sharpes Beach and just cruising on my own and I heard a splash and a noise and looked around and couldn’t see anything,” Matt Wilkinson, a pro surfer, said in a statement. “Then the drone came down and told me that there was a dangerous shark in the area, return to the beach.”

The drone is operated by Surf Life Saving NSW, an organization that monitors 34 popular beaches in New South Wales by unmanned aerial vehicle (UAV) to alert surfers and swimmers to the presence of large sharks. The program is part of the $8 million NSW Government Shark Management Strategy. The goal is to prevent shark attacks by getting people out of the water when large sharks are present. When a shark is spotted, the drones broadcast a pre-recorded message warning beachgoers to head to shore.

In the drone video, the shark swims toward Wilkinson, seemingly curious. As he paddles on the board, the shark approaches from behind, then seems to nose the tow rope on the surfboard. Suddenly, it darts away and out of sight.

“I’ve been surfing with sharks my whole life, and I understand they’re there and know enough about them to know they have not too much interest in humans. I’m just glad today the shark reconsidered at the last second,” Wilkinson said.

Nevertheless, Wilkinson said he felt “a bit weird” after the encounter. “I realized how close it came without knowing it was there,” he said.

In 2015, Wilkinson was competing at a surfing event in J-Bay, South Africa, in which fellow surfer Mick Fanning had a close encounter with a great white shark. The shark did not bite Fanning, but swam close by him, knocked him off his surfboard and severed the leash attaching his ankle to his board. The encounter was captured on video.

Australia, however, has a relatively high number of shark-human encounters, because sharks, surfers and swimmers tend to ply the same waters. In 2019, the country was behind only the United States in number of unprovoked shark attacks, with 11 total.

After two years with only one shark attack death in Australia, 2020 has been a dangerous year, with six deadly shark attacks so far. The most recent was on Sept. 8, when a 46-year-old man died after a shark bit his leg near Greenmount Beach in Queensland, according to CNN. A 57-year-old diver was killed in Western Australia in January, and a 23-year-old wildlife ranger died in April after a shark attack at the Great Barrier Reef. A 36-year-old man was attacked and killed in July while spearfishing off the coast of Queensland. And there have been two deaths in New South Wales: a 60-year-old surfer who died in June after a shark bite to the leg, and a 15-year-old surfer attacked in July.

Beside the drone surveillance, the New South Wales risk-reduction program also uses underwater listening stations and nonlethal SMART drumlines, which use baited lines to capture sharks near busy beaches. When a shark is snagged, the drumlines send a signal to a nearby fishing boat. If the captured shark is a great white — the species responsible for all fatal shark attacks in Australia since 2000 — it is tagged before its release farther from shore. Data from the tags is intended to determine whether this catch-and-release program reduces interactions between sharks and swimmers.

“It’s nice to know the drones go up and down the beach and can see what we can’t and it makes you feel more comfortable,” he said. “It makes other people aware that there are sharks out there but usually with no intention. It’s nice to know if there’s a big one around you can just come in and let them go by.”