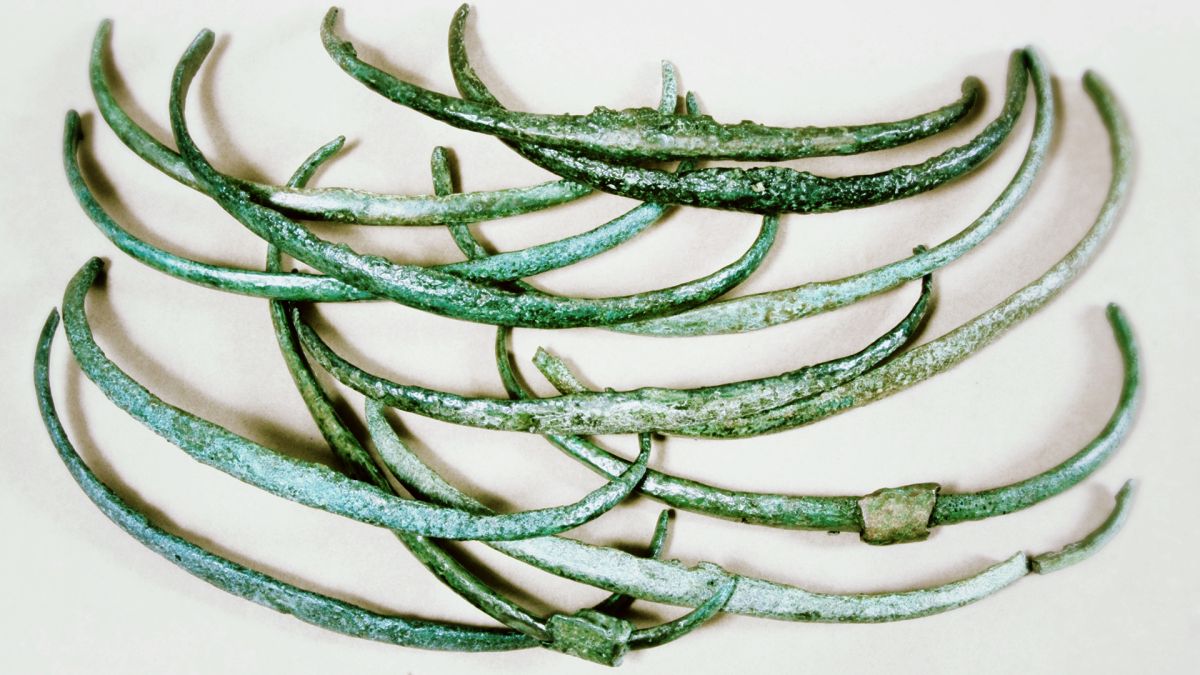 Got change for an axe? Thousands of years ago, people used bronze objects such as neck rings, axe blades and “ribs” (curved, flattened rods) as a type of prehistoric currency, making them the oldest known form of money in the world.

Archaeologists recently analyzed more than 5,000 of these ancient metal artifacts dating to the early Bronze Age (2150 B.C. to 1700 B.C.), from approximately 100 stashes around Central Europe.

They found hoards of similar objects — ribs, rings or blades — that were about the same size and weight. This relative uniformity, along with the fact that the objects were discovered in bundles or caches, rather than individually, suggesting that these items represented recognized standards of value and were used as an early form of money as far north as Scandinavia, researchers reported in a new study.

To be considered money — the kind that predates coins — an ancient object must have been produced in large numbers; used for exchanges; and “standardized in some way, such as in terms of appearance or weight, said lead study author Maikal Kuijpers, an assistant professor of archaeology at Leiden University in the Netherlands.

People traded objects for their value prior to the Bronze Age; Neolithic people frequently traded flint daggers. But such transactions treated individual daggers as prestige items, rather than as standardized commodities, Kuijpers told Live Science.

“That’s an important aspect of this group of Bronze Age objects — these are clearly, intentionally standardized,” he said. Kuijpers and co-author Cătălin Popa, a post-doctoral researcher in archaeology at Leiden University, published their findings on Jan. 20 in the journal PLOS One.

In modern money, denominations of coins and paper currency are mass-manufactured so as to be near-identical. By comparison, the Bronze Age rings, ribs and axes reviewed for the study were less uniform. But since civilizations at the time predated sophisticated weighing systems, people likely estimated an object’s weight based on how heavy (or how light) it felt in their hands. In other words, the precise weight of an object was unimportant as long as it was “perceptibly identical,” the scientists reported.

Kuijpers and Popa collected the weights of 2,639 rings, 1,780 ribs and 609 axe blades. They statistically compared the weights using a method based in psychophysics — a field in psychology that quantifies how we perceive weight and other factors with our senses. Their calculations revealed that an object weighing between 6 and 8 ounces (176 and 217 grams) would be perceived as equal in weight to an object weighing 7 ounces (196 grams) — the “standard” weight determined by the researchers based on the range of weights for the objects.

In addition to offering a glimpse of Bronze Age-era transactions, these findings raise intriguing questions about the evolution of human intelligence and problem-solving capabilities — “how people come to think of such a thing as a weighing system; the evolution of knowledge over time; and how human cognition develops,” he added.

“Our cognition doesn’t just take place in the brain; it actually occurs in engagement with the world and the materials that we work with,” he said.