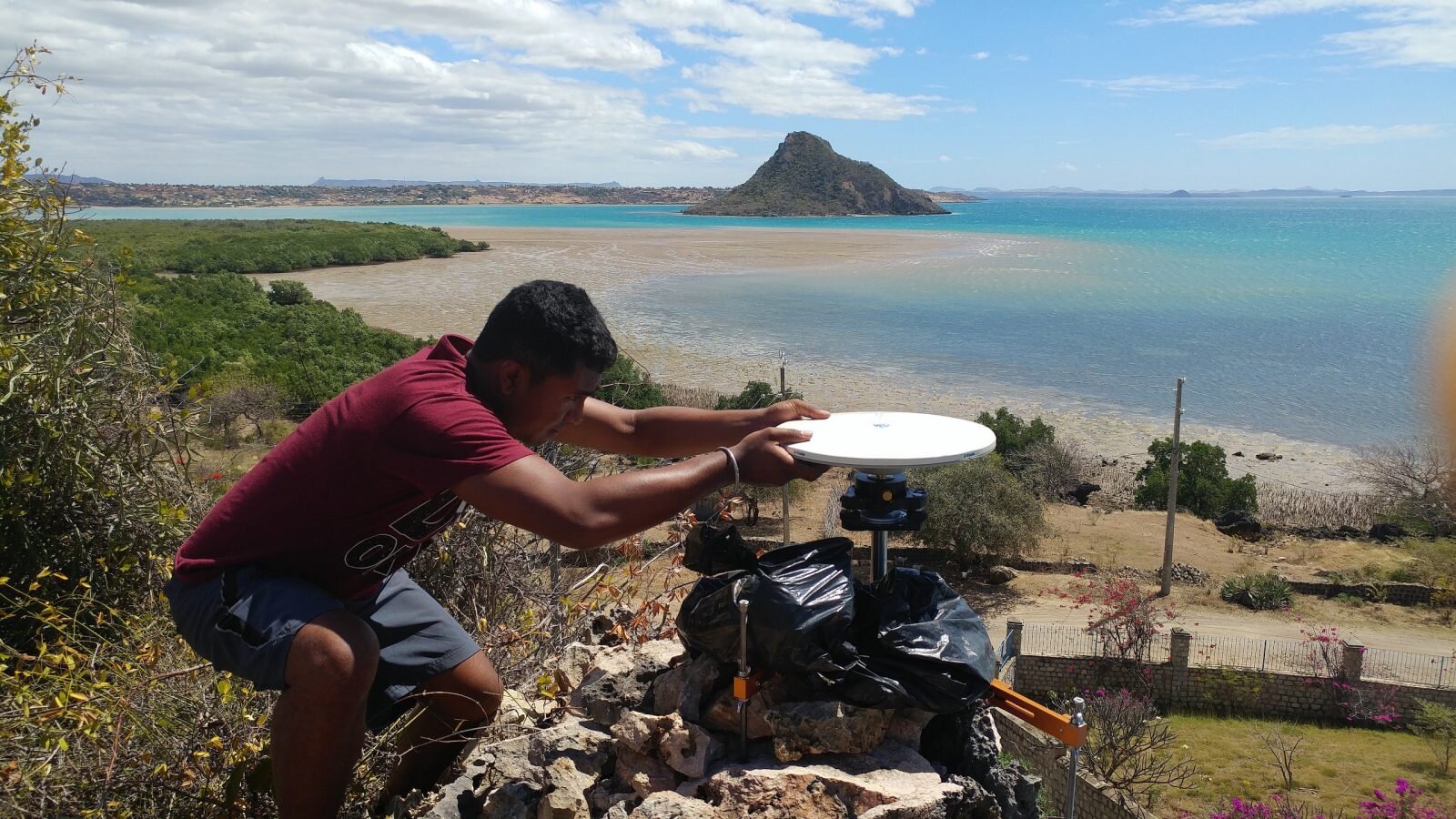 The African continent is slowly separating into several large and small tectonic blocks along the diverging East African Rift System, continuing to Madagascar—the long island just off the coast of Southeast Africa—that itself will also break apart into smaller islands.

These developments will redefine Africa and the Indian Ocean. The finding comes in a new study by D. Sarah Stamps of the Department of Geosciences for the journal Geology. The breakup is a continuation of the shattering of the supercontinent Pangea some 200 million years ago.

“The rate of present-day break-up is millimeters per year, so it will be millions of years before new oceans start to form,” said Stamps, an assistant professor in the Virginia Tech College of Science. “The rate of extension is fastest in the north, so we’ll see new oceans forming there first.”

Geosciences doctoral student Tahiry Rajaonarison sets up a GPS instrument in northern Madagascar in this 2016 photograph. Behind Tahir is the Indian Ocean and a rock island. Photo credit: Rina Andrianasolo.

“Most previous studies suggested that the extension is localized in narrow zones around microplates that move independent of surrounding larger tectonic plates,” Stamps said. The new GPS dataset of very precise surface motions in Eastern Africa, Madagascar, and several islands in the Indian Ocean reveal that the break-up process is more complex and more distributed than previously thought, according to the study, completed by Stamps with researchers from the University of Nevada-Reno, University of Beira Interior in Portugal, and the Institute and Observatory of Geophysics of Antananarivo at the University of Antananarivo in Madagascar itself.

In one region, the researchers found that extension is distributed across a wide area. The region of distributed extension is about 600 kilometers (372 miles) wide, spanning from Eastern Africa to whole parts of Madagascar. More precisely, Madagascar is actively breaking up with southern Madagascar moving with the Lwandle microplate—a small tectonic block—and a piece of central Madagascar is moving with the Somalian plate. The rest of the island is found to be deforming nonrigidly, Stamps added.

Also working on the paper was geosciences Ph.D. student Tahiry Rajaonarison, who previously was a master’s student at Madagascar’s University of Antananarivo. He assisted Stamps in 2012 in collecting GPS data that was used in this study. He joined Virginia Tech in 2015 and returned to Madagascar later to collect more data as the lead on a National Geographic Society grant. “Leading a team to collect GPS data in Madagascar in summer 2017 was an amazing field experience,” Rajaonarison said.

The team used new surface motion data and additional geologic data to test various configurations of tectonic blocks in the region using computer models. Through a comprehensive suite of statistical tests, the researchers defined new boundaries for the Lwandle microplate and Somalian plate. This approach allowed for testing if surface motion data are consistent with rigid plate motion.

“Accurately defining plate boundaries and assessing if continents diverge along narrowly deforming zones or through wide zones of diffuse deformation is crucial to unraveling the nature of continental break-up,” Stamps said. “In this work, we have redefined how the world’s largest continental rift is extending using a new GPS velocity solution.”

The discovery of the broad deforming zone helps geoscientists understand recent and ongoing seismic and volcanic activity happening in the Comoros Islands, located in the Indian Ocean between East Africa and Madagascar. The study also provides a framework for future studies of global plate motions and investigations of the forces driving plate tectonics for Stamps and her team.

Why the Victoria Plate in Africa rotates