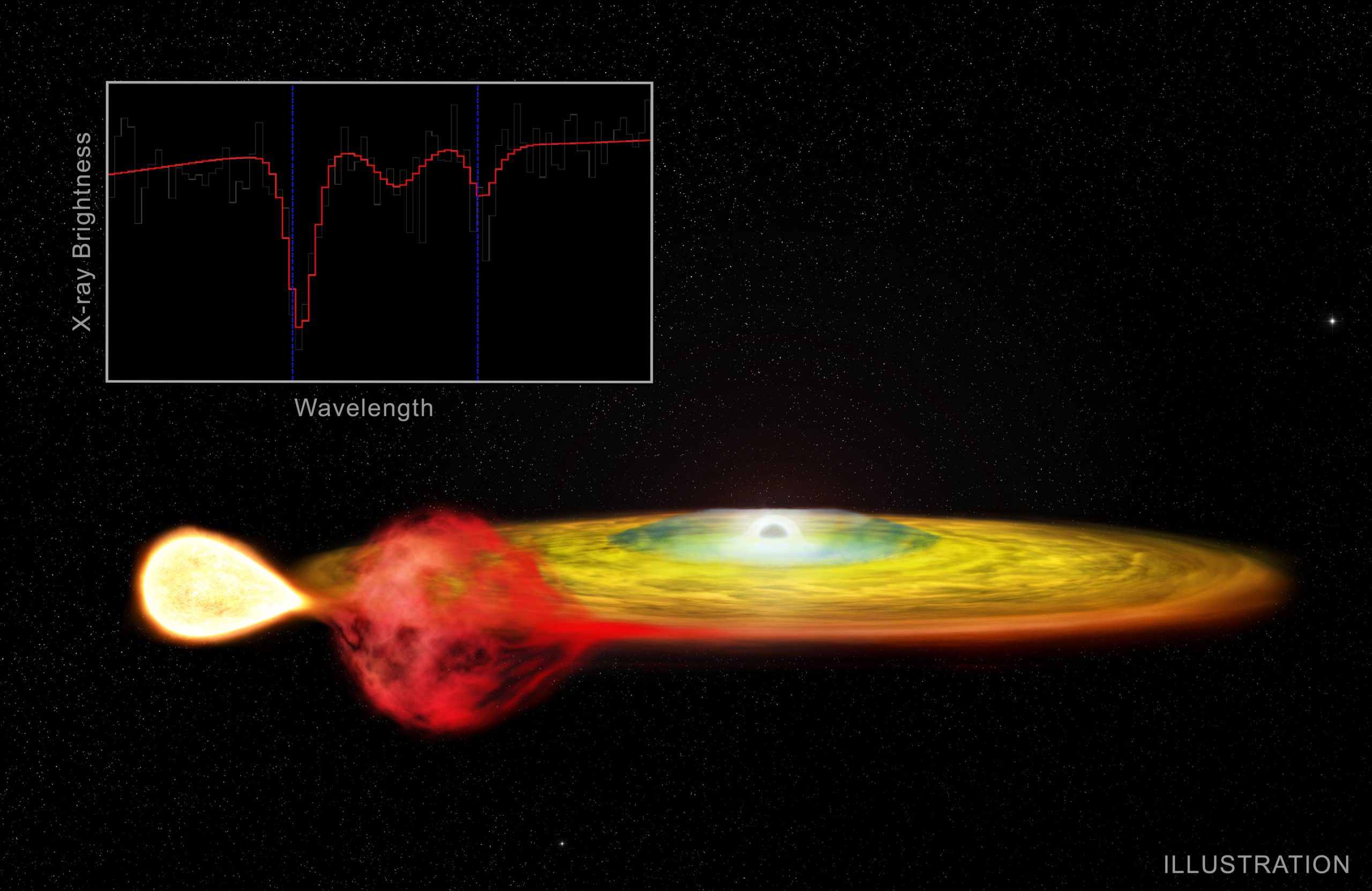 What do Albert Einstein, the Global Positioning System (GPS), and a pair of stars 200,000 trillion miles from Earth have in common?

The answer is an effect from Einstein’s General Theory of Relativity called the “gravitational redshift,” where light is shifted to redder colors because of gravity. Using NASA’s Chandra X-ray Observatory, astronomers have discovered the phenomenon in two stars orbiting each other in our galaxy about 29,000 light years (200,000 trillion miles) away from Earth. While these stars are very distant, gravitational redshifts have tangible impacts on modern life, as scientists and engineers must take them into account to enable accurate positions for GPS.

The intriguing system known as 4U 1916-053 contains two stars in a remarkably close orbit. One is the core of a star that has had its outer layers stripped away, leaving a star that is much denser than the Sun. The other is a neutron star, an even denser object created when a massive star collapses in a supernova explosion. The neutron star (grey) is shown in this artist’s impression at the center of a disk of hot gas pulled away from its companion (white star on left).

These two compact stars are only about 215,000 miles apart, roughly the distance between the Earth and the Moon. While the Moon orbits our planet once a month, the dense companion star in 4U 1916-053 whips around the neutron star and completes a full orbit in only 50 minutes.

In the new work on 4U 1916-053, the team analyzed X-ray spectra—that is, the amounts of X-rays at different wavelengths—from Chandra. They found the characteristic signature of the absorption of X-ray light by iron and silicon in the spectra. In three separate observations with Chandra, the data show a sharp drop in the detected amount of X-rays close to the wavelengths where the iron or silicon atoms are expected to absorb the X-rays. One of the spectra showing absorption by iron—the dips on the left and right—is included in the main graphic. An additional graphic shows a spectrum with absorption by silicon. In both spectra the data are shown in grey and a computer model in red.

However, the wavelengths of these characteristic signatures of iron and silicon were shifted to longer, or redder wavelengths compared to the laboratory values found here on Earth (shown with the blue, vertical line for each absorption signature). The researchers found that the shift of the absorption features was the same in each of the three Chandra observations, and that it was too large to be explained by motion away from us. Instead they concluded it was caused by gravitational redshift.

How does this connect with General Relativity and GPS? As predicted by Einstein’s theory, clocks under the force of gravity run at a slower rate than clocks viewed from a distant region experiencing weaker gravity. This means that clocks on Earth observed from orbiting satellites run at a slower rate. To have the high precision needed for GPS, this effect needs to be taken into account or there will be small differences in time that would add up quickly, calculating inaccurate positions.

All types of light, including X-rays, are also affected by gravity. An analogy is that of a person running up an escalator that is going down. As they do this, the person loses more energy than if the escalator was stationary or going up. The force of gravity has a similar effect on light, where a loss in energy gives a lower frequency. Because light in a vacuum always travels at the same speed, the loss of energy and lower frequency means that the light, including the signatures of iron and silicon, shift to longer wavelengths.

This is the first strong evidence for absorption signatures being shifted to longer wavelengths by gravity in a pair of stars that has either a neutron star or black hole. Strong evidence for gravitational redshifts in absorption has previously been observed from the surface of white dwarfs, with wavelength shifts typically only about 15% of that for 4U 1916-053.

Scientists have been awarded further Chandra observation time in the upcoming year to study this system in more detail.

A paper describing these results was published in the August 10th, 2020 issue of The Astrophysical Journal.