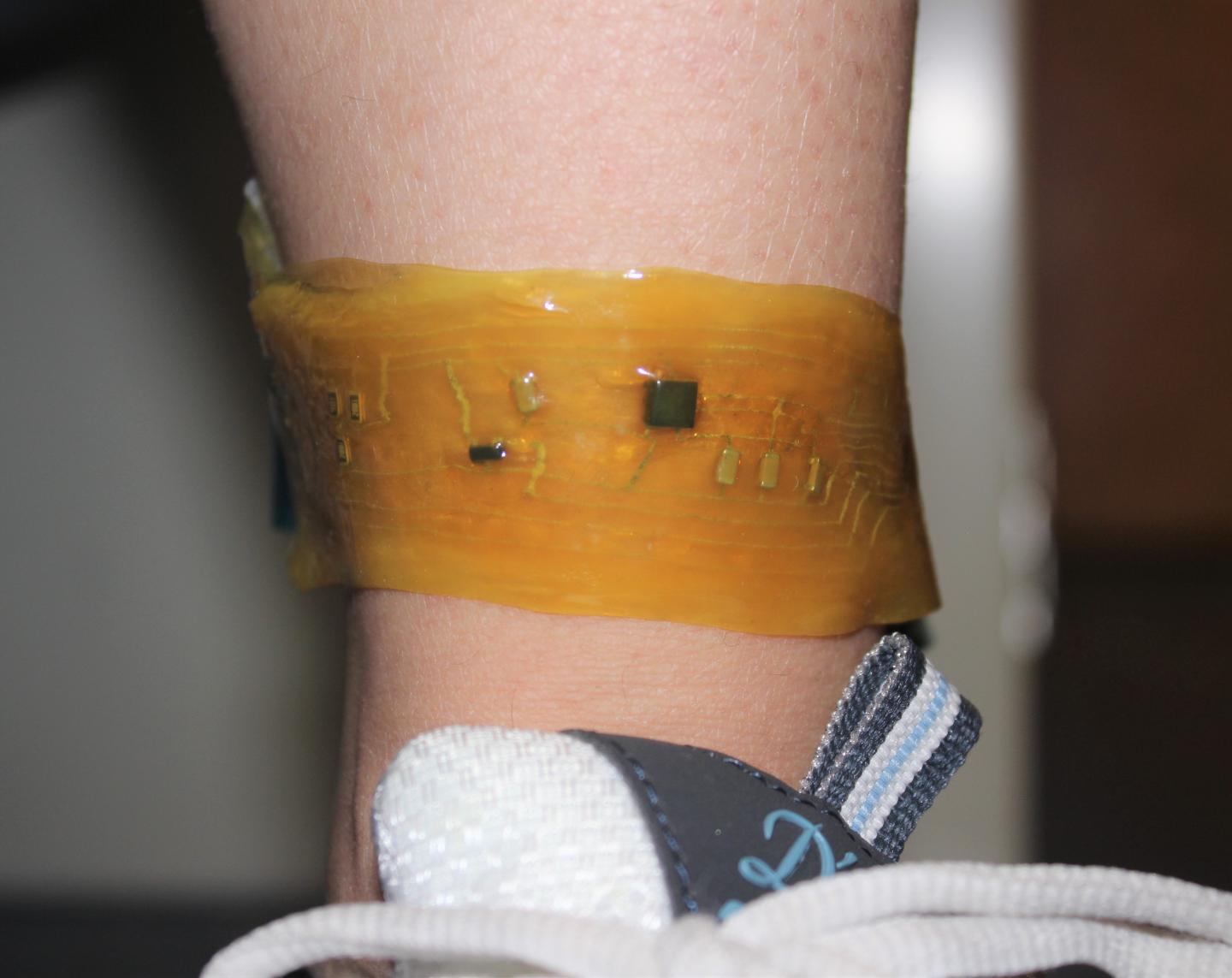 Researchers at the University of Colorado Boulder are developing a wearable electronic device that’s “really wearable”–a stretchy and fully-recyclable circuit board that’s inspired by, and sticks onto, human skin.

The team, led by Jianliang Xiao and Wei Zhang, describes its new “electronic skin” in a paper published today in the journal Science Advances. The device can heal itself, much like real skin. It also reliably performs a range of sensory tasks, from measuring the body temperature of users to tracking their daily step counts.

And it’s reconfigurable, meaning that the device can be shaped to fit anywhere on your body.

He and his colleagues are hoping that their creation will help to reimagine what wearable devices are capable of. The group said that, one day, such high-tech skin could allow people to collect accurate data about their bodies–all while cutting down on the world’s surging quantities of electronic waste.

“Smart watches are functionally nice, but they’re always a big chunk of metal on a band,” said Zhang, a professor in the Department of Chemistry. “If we want a truly wearable device, ideally it will be a thin film that can comfortably fit onto your body.”

Those thin, comfortable films have long been a staple of science fiction. Picture skin peeling off the face of Arnold Schwarzenegger in the Terminator film franchise. “Our research is kind of going in that direction, but we still have a long way to go,” Zhang said.

His team’s goals, however, are both robot and human. The researchers previously described their design for electronic skin in 2018. But their latest version of the technology makes a lot of improvements on the concept–for a start, it’s far more elastic, not to mention functional.

To manufacture their bouncy product, Xiao and his colleagues use screen printing to create a network of liquid metal wires. They then sandwich those circuits in between two thin films made out of a highly flexible and self-healing material called polyimine.

The resulting device is a little thicker than a Band-Aid and can be applied to skin with heat. It can also stretch by 60% in any direction without disrupting the electronics inside, the team reports.

“It’s really stretchy, which enables a lot of possibilities that weren’t an option before,” Xiao said.

The team’s electronic skin can do a lot of the same things that popular wearable fitness devices like Fitbits do: reliably measuring body temporary, heart rate, movement patterns and more.

If you slice a patch of electronic skin, Zhang said, all you have to do is pinch the broken areas together. Within a few minutes, the bonds that hold together the polyimine material will begin to reform. Within 13 minutes, the damage will be almost entirely undetectable.

“Those bonds help to form a network across the cut. They then begin to grow together,” Zhang said. “It’s similar to skin healing, but we’re talking about covalent chemical bonds here.”

Xiao added that the project also represents a new approach to manufacturing electronics–one that could be much better for the planet. By 2021, estimates suggest that humans will have produced over 55 million tons of discarded smart phones, laptops and other electronics.

His team’s stretchy devices, however, are designed to skip the landfills. If you dunk one of these patches into a recycling solution, the polyimine will depolymerize, or separate into its component molecules, while the electronic components sink to the bottom. Both the electronics and the stretchy material can then be reused.

“Our solution to electronic waste is to start with how we make the device, not from the end point, or when it’s already been thrown away,” Xiao said. “We want a device that is easy to recycle.”

The team’s electronic skin is a long way away from being able to compete with the real thing. For now, these devices still need to be hooked up to an external source of power to work. But, Xiao said, his group’s research hints that cyborg skin could soon be the fashion fad of the future.

“We haven’t realized all of these complex functions yet,” he said. “But we are marching toward that device function.”