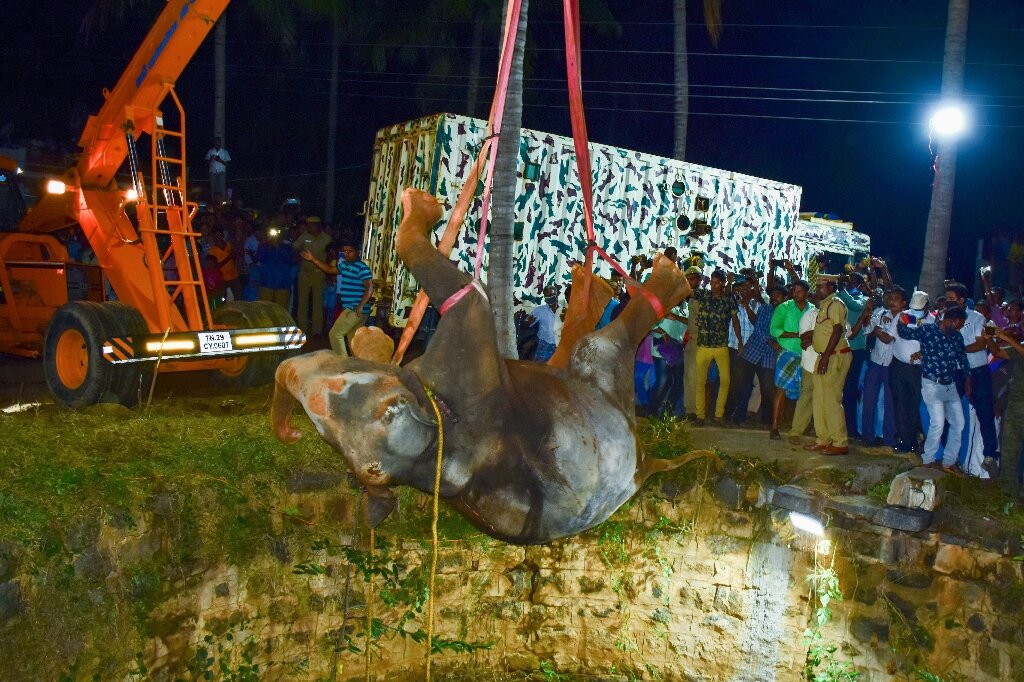 A wild elephant that fell into a well in southern India was lifted out with a crane following a 16-hour rescue mission involving dozens of rangers and firefighters.

The elephant fell more than 20 metres (70 feet) after it wandered into a village in Tamil Nadu state last week while looking for food.

“Villagers heard sounds and saw the animal had fallen into the well,” local forest ranger Rajkumar told AFP. He said they believed it might have been trying to escape from a pack of dogs.

Frightened at first, villagers called authorities when they realised it could die unless rescued.

Some 50 rangers and firefighters rushed to the village, where they initially tried to pump water out of the well—but the scared creature kept pushing away the equipment they were using.

The rescuers then tried shooting the 2.4-metre (eight-foot) elephant with tranquilliser darts.

“Out of the three times we tried, we succeeded twice,” Rajkumar said.

As night fell, watched on by a large crowd of villagers, rescuers climbed down into the well and attached straps to the sedated animal’s feet. They then used a crane to hoist the elephant out upside down.

It was monitored by rangers for half an hour before being ushered back into the forest.

India is home to nearly 30,000 elephants, around 60 percent of the wild Asian elephant population.

But urban expansion has put them in conflict with humans.

About 2,360 people were killed in elephant attacks between 2014 and 2019, according to Indian government data.

In the same period about 510 elephants died, including 333 from electrocution and around 100 from poaching and poisoning, the figures show.

Earlier this year in the southern state of Kerala, a plantation worker was arrested when a pregnant elephant died after eating fruit laced with explosives.

His plan was to keep wild boar from raiding a plantation.