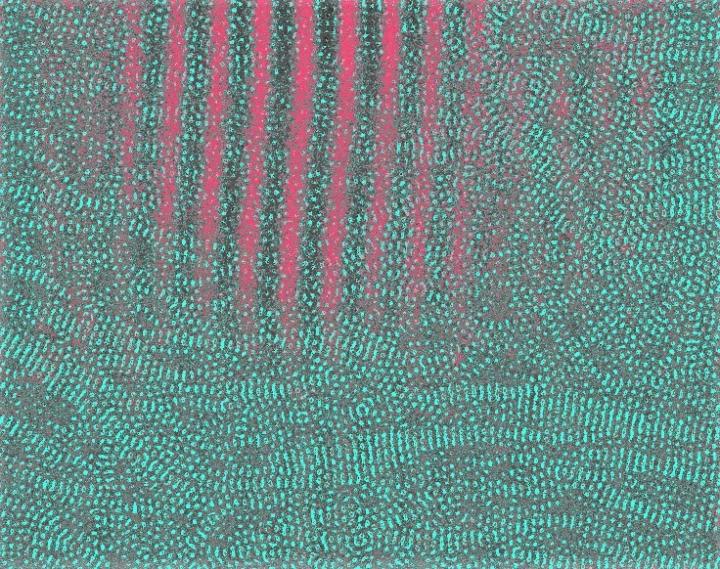 Reactive molecules, such as free radicals, can be produced in the body after exposure to certain environments or substances and go on to cause cell damage. Antioxidants can minimize this damage by interacting with the radicals before they affect cells.

According to Gomez, visualizing the structures of conducting polymers is crucial to further develop these materials and enable commercialization of soft electronic devices — but the actual imaging can cause damage that limits what researchers can see and understand.

“It turns out antioxidants, like those you’d find in berries, aren’t just good for you but are also good for polymer microscopy,” Gomez said.

Polymers can only be imaged to a certain point with high-resolution transmission electron microscopy (HRTEM) because the bombardment of electrons used to form images breaks the sample apart.

The researchers examined this damage with the goal of identifying its fundamental cause. They found the HRTEM electron beam generated free radicals that degraded the sample’s molecular structure. Introducing butylated hydroxytoluene, an antioxidant often used as a food additive, to the polymer sample prevented this damage and removed another restriction on imaging conditions — temperature.

“Until now, the main strategy for minimizing polymer damage has been imaging at very low temperatures,” said paper co-author Brooke Kuei, who earned her doctorate in materials science and engineering in the Penn State College of Earth and Mineral Sciences in August. “Our work demonstrates that the beam damage can be minimized with the addition of antioxidants at room temperature.”

Although the researchers did not quantitatively test the resolution limits that resulted from this method, they were able to image the polymer at a resolution of 3.6 angstroms, an improvement from their previous resolution of 16 angstroms. For comparison, an angstrom is about one-millionth the breadth of a human hair.

Polymers are made up of molecular chains lying on top of each other. The previously imaged distance of 16 angstroms was the distance between chains, but imaging at 3.6 angstroms allowed researchers to visualize patterns of close contacts along the chains. For the electrically conductive polymer examined in this study, researchers could follow the direction along which electrons travel. According to Gomez, this allows them to better understand the conductive structures in polymers.

“The key to this advancement in polymer microscopy was understanding the fundamentals of how the damage occurs in these polymers,” Gomez said. “This technological advance will hopefully help lead to the next generation of organic polymers.”

The National Science Foundation and Kuei’s graduate fellowship through the U.S. Department of Energy Office of Science supported this work.