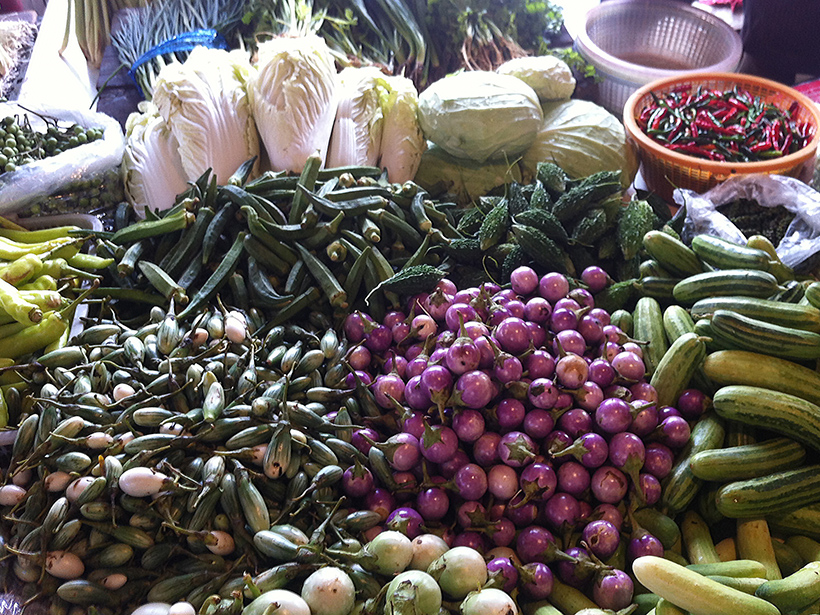 Food security is defined as all people, at all times, having physical, social, and economic access to sufficient, safe, and nutritious food for an active and healthy life. Food insecurity exists when any of these factors is impeded. Chronic food insecurity is usually the result of persistent poverty. Acute food insecurity, on the other hand, is related to human-induced or natural shocks to the food system—such as a drought or flood—that reduce short-term food availability or access, particularly for those already experiencing chronic food insecurity.

Earth science observations have been used for decades to evaluate food production in countries facing food insecurity, but they’ve been used only sporadically. Weather and climate variations have profound effects on crop production and, ultimately, food security, although such observations are still not being used regularly to understand agriculture and inform food security decisionmaking. The challenge for scientists, modelers, and policymakers is connecting real-time geospatial Earth science data to those who operate the food system, who are largely rural and lack the technological expertise to respond.

Over multiyear timescales, climate extremes and global environmental change influence food production and the well-being of agricultural communities in complex ways that are challenging to assess to any degree of certainty [Vermeulen et al., 2012]. Meanwhile, weather during the growing season affects how well crops grow in a given year and thus the income of farmers, traders, wage laborers, and others in the agriculture sector, which in turn affects entire economies on local, regional, and potentially national and global scales. Acute food insecurity from repeated weather shocks can eventually lead to chronic malnutrition, which has significant economic and physical consequences for affected communities [Brown et al., 2020].

Earth science data and observations can quantify weather and climate impacts on a region and can be integrated into predictive models to inform adaptation plans. But evolving rural economies to allow for the application of such data requires adoption of new agricultural technologies and investment in rural livelihoods that can strengthen the broader food system.

Regions with rural livelihoods are dominated by small-scale agriculture, such as those in sub-Saharan Africa, where most owners of the approximately 33 million small farms are also often food insecure and live below the official poverty line [Gassner et al., 2019]. Although rural economies vary, most smallholder farmers today have stagnant incomes and falling yields, even in places where rural populations are growing. Effects of climate change are further stressing these areas.

There are very few data sets from which to generate this information for smallholder agriculture, particularly for subsistence farms, which tend to be isolated from global market forces.

If these farmers are to increase production, they will need reliable information about local market prices for their crops as well as the cost and availability of agriculture inputs (e.g., seeds, fertilizer, machinery, and labor) and an understanding of the best management practices to reduce the impact of pests and weather variability on production. However, there are very few data sets from which to generate this information for smallholder agriculture, particularly for subsistence farms, which tend to be isolated from global market forces. Data on subsistence agriculture that are sufficiently localized and up to date are very difficult to obtain because of the diversity of crops, cultivation practices, and ecologies of agricultural regions across the world.

Some organizations are beginning to address this challenge. The World Bank’s Living Standards Measurement Study-Integrated Surveys on Agriculture is a data collection project at the household level in eight countries in sub-Saharan Africa. One major goal of the project is to foster innovation in sustainability methods specifically for small farmers. But this and other efforts, like the follow-on 50×2030 Initiative, are still quite limited in scope and do not integrate much near-real-time Earth science data.

A variety of institutions concerned with food security in low- and middle-income countries are engaging with the Earth science community. Given the enormous variety of small farms around the world—from shifting cultivation in Colombia’s rain forest to dryland millet farmers in northern Niger to paddy rice farmers in Cambodia—constantly collecting on-the-ground information about these communities is unrealistic. However, satellite observations already being collected by geoscientists can help relieve data collection burdens.

For example, in Uganda, anomalous vegetation data from the Moderate Resolution Imaging Spectroradiometer (MODIS) aboard NASA’s Terra satellite are the primary trigger for the government’s Disaster Risk Financing (DRF) fund. In 2017, satellite data were showing that a drought was going to affect crop yields. The early warning allowed the government to use the DRF fund to provide relief to around 150,000 Ugandans who would have been affected by the food shortage. Initiatives like this one, which work to integrate Earth science information to improve food security decisionmaking, could be transformative.

In 2011, the G20 launched a plan to foster international coordination and transparency regarding food production. The platform for this effort is the Agriculture Market Information System, or AMIS, which assesses global food supplies with the aim of preventing or preparing for market shocks and uncertainty. AMIS relies on agricultural experts who provide regional market and policy information. It also relies, crucially, on geoscience data. Those data are provided by GEOGLAM (Group on Earth Observations Global Agricultural Monitoring Initiative), the other half of the G20’s initiative. Operated by the University of Maryland, GEOGLAM monitors crop health via satellite observations.

By collaborating to build a food production information system that’s based on high-quality Earth science and local expertise, farmers and everyone else along the food supply chain are gaining access to information that can help them prevent acute food insecurity before it strikes.

Brazil’s national agriculture agency, Conab, for example, became a GEOGLAM partner in 2018 and now incorporates these Earth observations into its national crop assessments provided to farmers. In Zambia and Zimbabwe, GEOGLAM works with the national agricultural ministries to create high-resolution cropland masks by combining Sentinel-2 observations with information crowdsourced from locals. By collaborating to build a food production information system based on high-quality Earth science and local expertise, farmers and everyone else along the food supply chain are gaining access to information that can help them prevent acute food insecurity before it strikes.

Field-level information products that incorporate remote sensing data are being developed by Kenya-based Pula. The company offers affordable insurance to small farmers across Africa and the Middle East. The insurance protects livelihoods when drought, floods, locust swarms, or other events damage crops or prevent germination. Locals use smartphone apps to report crop production information, which the company merges with geospatial observations. Pula then uses those apps to provide targeted agronomy consulting, as well as alerts about weather, pests, and disease. Pula reports that the number of insured farmers in Kenya has grown from 1,000 to 10,000 in about 3 years. The company has thus far paid out approximately US$766,000 for crop losses, and around 80% of households report using part of those insurance funds to purchase food.

Earth observations, of course, are useful only if they can provide meaningful information. Radiant Earth Foundation is developing machine learning methods to analyze and classify observations from the Sentinel-2 satellite. The organization is building an open library of spatially specific field data through partnerships, such as a data set of 319 farming plots in Kenya that combines Earth observations with on-the-ground surveys.

Coordination and engagement among these efforts is critical to improving our understanding of the Earth system and to providing real benefits to smallholders and the vulnerable communities they serve. Scientists engaged in these and other efforts to link Earth system science to food security outcomes should encourage further discussion across funding agencies, governments, universities, and scientists and work to bring in additional partners who can help deliver timely and reliable information, insights, and technology. The push to deliver more and better information about food security is literally a life-or-death proposition.