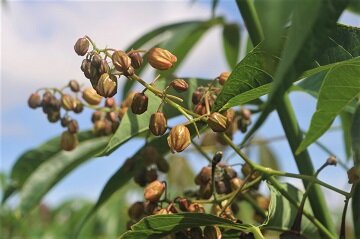 New knowledge about the flowering mechanism of a popular cassava cultivar, gleaned by a RIKEN-led study, could help efforts to produce improved breeds of the crop.

Cassava is a major tropical crop that provides sustenance to people throughout Latin America, Africa and South Asia. The crop is produced through vegetative propagation and does not normally flower in agricultural fields. The difficulty in inducing cassava to flower and produce seeds slows down traditional breeding, and also poses a challenge to molecular breeding efforts. “Without flowering and producing seeds, an introduced gene might be lost if it is chimera,” explains Motoaki Seki of the RIKEN Center for Sustainable Resource Science.

An international collaboration, led by Seki, investigated the environmental factors that control cassava flowering. Hiroki Tokunaga, the lead author of the study, explains the conundrum: “Plants generally control flowering timing by recognizing changes in temperature and day length, but in tropical areas the day length and temperature do not change much during the year.”

The team monitored the growth and flowering of cassava at five sites in Vietnam and Cambodia. Plants in Bac Kan and Lam Dong produced flowers, while those grown in Hanoi, Dong Nai and Battambang did not. Since the sites at Bac Kan and Lam Dong were higher than those in the other locations, this suggests that flowering is accelerated in high or mountainous regions.

To see if plants were flowering in response to a specific cue or after a certain amount of time had passed, the researchers varied the planting data at the Bac Kan site. The plants consistently flowered in August and September, showing that flowering occurs in response to an environmental cue. “Our findings suggest low temperature or drought conditions might induce flowering, but we don’t have direct evidence for that,” says Tokunaga.

The team also monitored changes in the expression of genes related to flowering in the plants. They found that expression of the MeFT1 gene increased during the transition to flowering. They also identified 14 other flowering-related genes that had expression correlated with MeFT1, as well as a collection of environmental response genes that are coexpressed.

“In general, flowering is not directly related to stress-response genes, but our findings suggest an interaction between flowering and abiotic stress,” says Seki. “That was a very big surprise for me.”

The team now plans to investigate the interaction between stress response and flowering, with the aim of assembling a full picture of the environmental, molecular and genetic underpinnings of flowering in cassava.