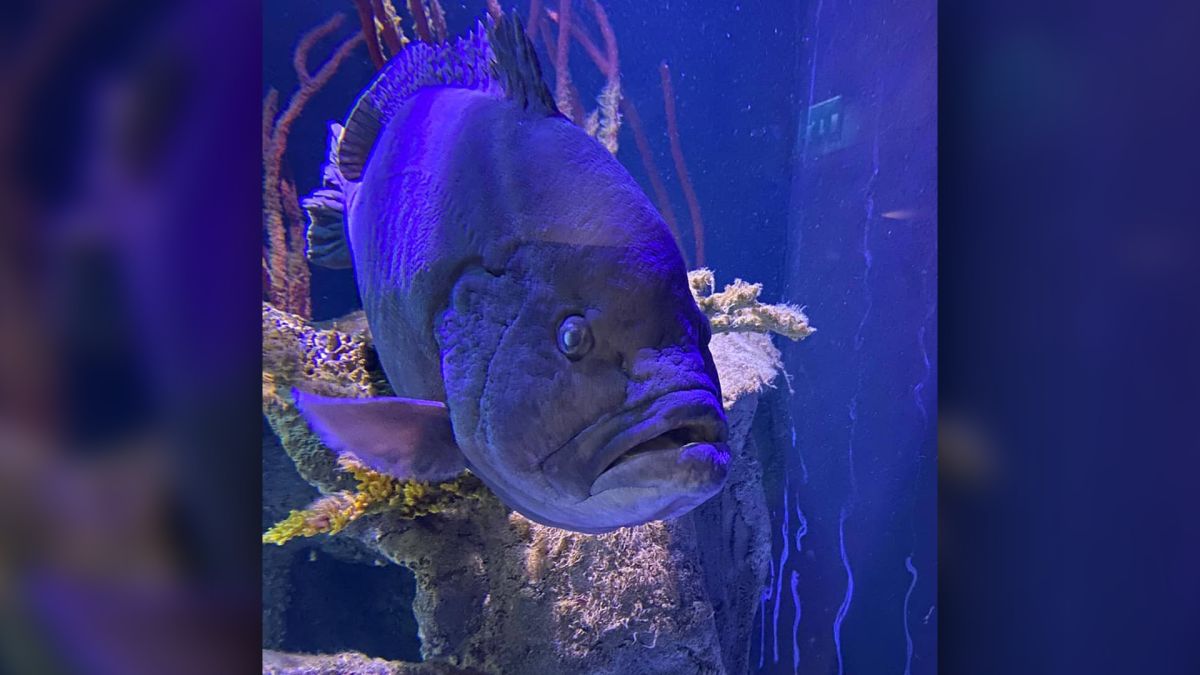 A grumpy-faced grouper named Mikko in a Finland aquarium was more down-in-the-mouth than usual, after the facility temporarily closed to the public due to the coronavirus pandemic. So the aquarium’s staff threw him a birthday party.

Mikko missed seeing human visitors at the Sea Life Helsinki’s Sea Lab ocean laboratory, because he had no fish companions in his tank … due to the fact that he wouldn’t stop eating them, an aquarium representative told Live Science in an email.

Since the COVID-19 shutdown in the spring, Mikko’s caretakers noted that the already-solitary fish seemed listless and apathetic, though he was still physically healthy. To cheer him up, they recently brought him a special treat to celebrate his 16th birthday: a salmon “cake.” In a video shared on Facebook on Oct. 12, the birthday fish enthusiastically devoured the delicacy — and he didn’t have to share it with anyone.

Mikko, who arrived at the aquarium in 2007, is a hefty fish, measuring about 3 feet (1 meter) long and weighing about 35 lbs. (16 kilograms). The pet store that was Mikko’s former home gave him up because he outgrew all their tanks (and because he kept eating his tank-mates), the Sea Life representative said.

At the aquarium, Mikko is fed three to four times a week on a diet of squid and small fish such as herring, mackerel or whiting. Unfortunately for Mikko’s neighbors at Sea Life, he also demonstrated a hearty appetite for whatever happened to be sharing his tank — he even scarfed down a venomous lionfish.

And Mikko isn’t the only grouper with a taste for large, dangerous prey — scientists have previously documented groupers swallowing sharks in a single gulp.

After the so-called “lionfish incident,” caretakers moved Mikko into a tank by himself. Deprived of the company of his fellow fish, he appeared “depressed” when people stopped coming to visit him at the aquarium during the spring shutdown, and was “more still and distant than usual,” the representative said.

“To cheer him up during the time that we were closed, the caretakers and other staff had lunch and coffee breaks by his tank,” the representative said in the email. “They brushed him with a soft brush to activate him a bit, and he also had a TV to keep him company.”

However, they had to be very careful when using the brush. In December 2019, Mikko snatched a brush from a keeper’s hand and swallowed it. The brush lodged in his throat, and aquarium staff had to anesthetize Mikko so the brush could be safely removed, Finnish news site Ilta-Sanomat reported.

Though Mikko’s behavior has changed since the COVID-19 lockdown, was he truly depressed? His story might sound fishy — an example of people interpreting animal behavior through a human lens. However, biologists have found that fish do exhibit signs of depression. Depressed zebrafish are withdrawn and lose interest in stimuli, much as people do when they are clinically depressed; in experiments, zebrafish with those “symptoms” also usually floated near the bottom of their tanks, biologists at Troy University in Alabama said in a statement in 2017. By comparison, “happy” fish in those experiments were more active and spent time close to the surface, the researchers said.

While Mikko’s many fans may not have visited him in person during the shutdown, they didn’t forget him. On Oct. 5, Sea Life Helsinki posted a photo on Facebook of Mikko’s “fan wall” — a display next to the tank showing notes and drawings sent by admirers of the dour grouper.

Mikko seemed to enjoy his birthday “cake,” and the festivities continued throughout the week, Sea Life representatives wrote on Facebook. With visitors now returning to the aquarium, the future may look a little brighter to the famous grouper. In fact, his caretakers are already making plans for his 17th birthday party, according to the post.

“Next year, you will be celebrated again, Mikko,” aquarium representatives wrote.