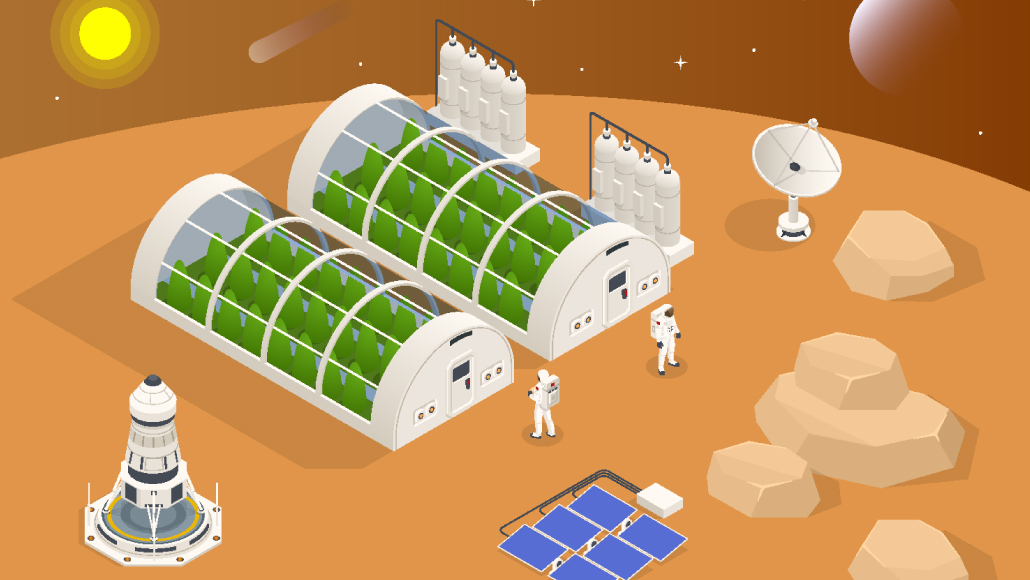 In the film The Martian, astronaut Mark Watney (played by Matt Damon) survives being stranded on the Red Planet by farming potatoes in Martian dirt fertilized with feces.

Future Mars astronauts could grow crops in dirt to avoid solely relying on resupply missions, and to grow a greater amount and variety of food than with hydroponics alone (SN: 11/4/11). But new lab experiments suggest that growing food on the Red Planet will be a lot more complicated than simply planting crops with poop (SN: 9/22/15).

Researchers planted lettuce and the weed Arabidopsis thaliana in three kinds of fake Mars dirt. Two were made from materials mined in Hawaii or the Mojave Desert that look like dirt on Mars. To mimic the makeup of the Martian surface even more closely, the third was made from scratch using volcanic rock, clays, salts and other chemical ingredients that NASA’s Curiosity rover has seen on the Red Planet (SN: 1/31/19). While both lettuce and A. thaliana survived in the Marslike natural soils, neither could grow in the synthetic dirt, researchers report in the upcoming Jan. 15 Icarus.

“It’s not surprising at all that as you get [dirt] that’s more and more accurate, closer to Mars, that it gets harder and harder for plants to grow in it,” says planetary scientist Kevin Cannon of the Colorado School of Mines in Golden, Colo., who helped make the synthetic Mars dirt but wasn’t involved in the new study.

Soil on Earth is full of microbes and other organic matter that helps plants grow, but Mars dirt is basically crushed rock. The new result “tells you that if you want to grow plants on Mars using soil, you’re going to have to put in a lot of work to transform that material into something that plants can grow in,” Cannon says.

Biochemist Andrew Palmer and colleagues at the Florida Institute of Technology in Melbourne planted lettuce and A. thaliana seeds in imitation Mars dirt under controlled lighting and temperature indoors, just as astronauts would on Mars. The plants were cultivated at 22° Celsius and about 70 percent humidity.

Seeds of both species germinated and grew in dirt mined from Hawaii or the Mojave Desert, as long as the plants were fertilized with a cocktail of nitrogen, potassium, calcium and other nutrients. No seeds of either species could germinate in the synthetic dirt, so “we would grow up plants under hydroponic-like conditions, and then we would transfer them” to the artificial dirt, Palmer says. But even when given fertilizer, those seedlings died within a week of transplanting.

Palmer’s team suspected that the problem with the synthetic Mars dirt was its high pH, which was about 9.5. The two natural soils had pH levels around 7. When the researchers treated the synthetic dirt with sulfuric acid to lower the pH to 7.2, transplanted seedlings survived an extra week but ultimately died.

The team also ran up against another problem: The original synthetic dirt recipe did not include calcium perchlorate, a toxic salt that recent observations suggest make up to about 2 percent of the Martian surface. When Palmer’s team added it at concentrations similar to those seen on Mars, neither lettuce nor A. thaliana grew at all in the dirt.

“The perchlorate is a major problem” for Martian farming, says Edward Guinan, an astrobiologist at Villanova University in Pennsylvania who was not involved in the work. But calcium perchlorate may not have to be a showstopper. “There are bacteria on Earth that enjoy perchlorates as a food,” Guinan says. As the microbes eat the salt, they give off oxygen. If these bacteria were taken from Earth to Mars to munch on perchlorates in Martian dirt, Guinan imagines that the organisms could not only get rid of a toxic component of the dirt, but perhaps also help produce breathable oxygen for astronauts.

What’s more, the exact treatment required to make Martian dirt farmable may vary, depending on where astronauts make their homestead. “It probably depends where you land, what the geology and chemistry of the soil is going to be,” Guinan says.

To explore how that variety might affect future agricultural practices, geochemist Laura Fackrell of the University of Georgia in Athens and colleagues mixed up five new types of faux Mars dirt. The recipes for these fake Martian materials, also reported in the Jan. 15 Icarus, are based on observations of Mars’ surface from the Curiosity, Spirit and Opportunity rovers, as well as NASA’s Mars Global Surveyor spacecraft and Mars Reconnaissance Orbiter.

Each new artificial Mars dirt represents a mix of materials that could be found or made on the Red Planet. One is designed to represent the average composition across Mars, similar to the synthetic material created by Cannon’s team. The other four varieties have slightly different makeups, such as dirt that is particularly rich in carbonates or sulfates. This collection “expands the palette of what we have available” as test-beds for agricultural experiments, Fackrell says.

She’s now using her stock to run preliminary plant growth experiments. So far, a legume called moth bean, which has similar nutritional content to a soybean but is more drought resistant, has grown the best. “But they’re not necessarily super healthy,” Fackrell says. Future experiments could explore what nutrient cocktails help plants survive in the various fake Martian terrains. But this much is clear, Fackrell says: “It’s not quite as easy as it looks in The Martian.”