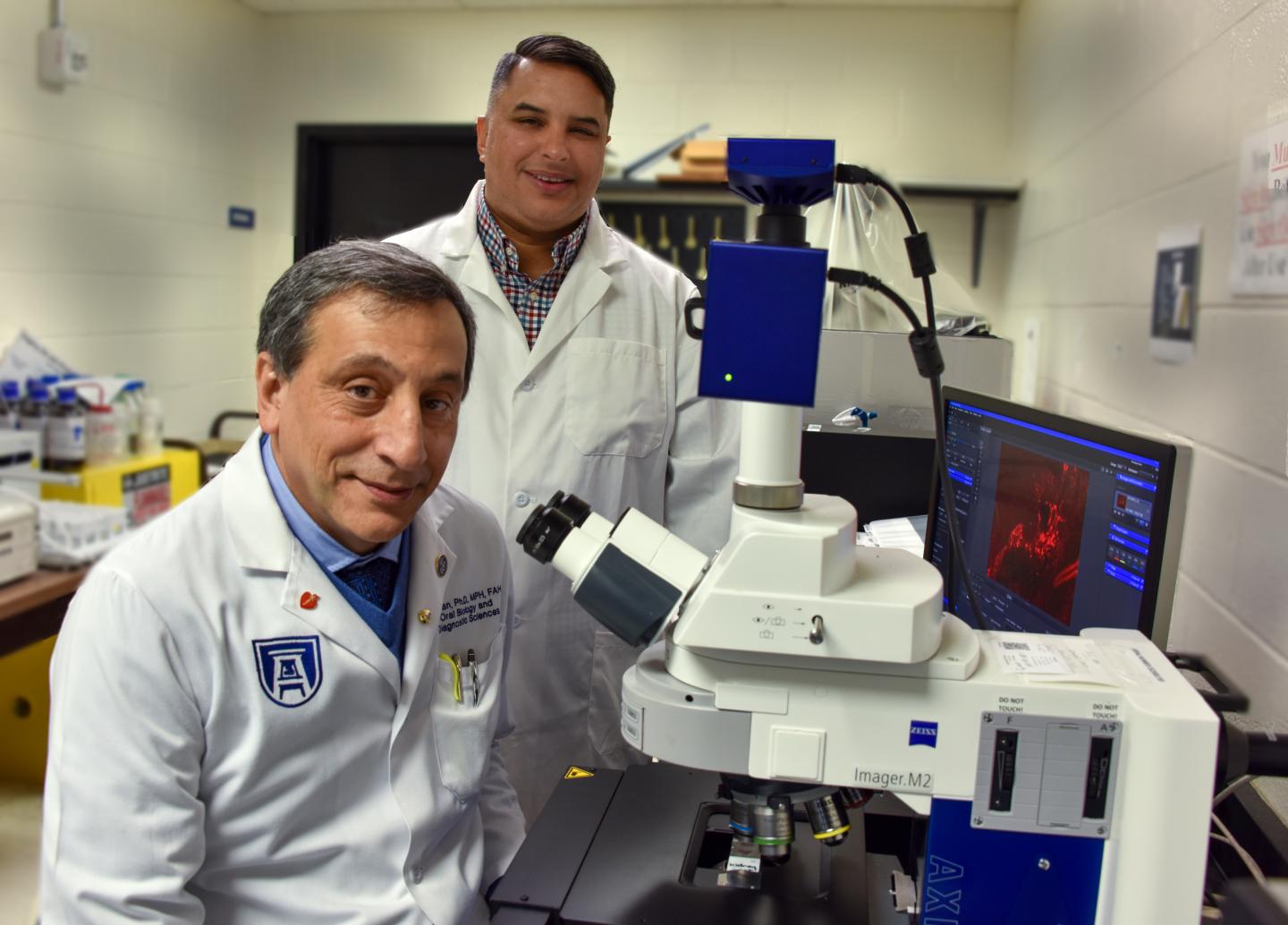 AUGUSTA, Ga. (January 25, 2021) – Immediately after a traumatic brain injury and as long as one year later, there are increased levels of immune cells called ILCs in the brain promoting inflammation, which can worsen brain damage, scientists report.

They also report for the first time that the cell energy sensor AMPK is a brake that can stop what becomes a chronic state of destructive inflammation driven by these ILCs, or innate lymphoid cells.

“We think ILCs are kind of a master regulator of all that inflammation happening within the brain,” says Dr. Krishnan Dhandapani, neuroscientist in the Department of Neurosurgery at the Medical College of Georgia at Augusta University. “It’s like the thermostat in the room.”

They report in the journal JCI Insight that using the common diabetes drug metformin to turn up AMPK, an enzyme essential to maintaining sufficient energy inside cells, restores a healthier balance between the three known subtypes of ILCs, says Dr. Babak Baban, immunologist and associate dean for research in the Dental College of Georgia at AU.

The scientists from MCG and DCG call TBI a worldwide public health issue, which kills or debilitates three million people each year. About one-third of patients hospitalized with a TBI die from brain damage that occurs weeks or months after the initial injury. Those who survive have an increased risk of dementia and cognitive decline. Ongoing inflammation in the brain parallels the ongoing damage and loss of function, but standard anti-inflammatory therapies have not really improved outcomes, they write.

Therapies that target and decrease sources of increased inflammation, like the ILC subtypes ILC1 and ILC3, following a TBI, and increase expression of the anti-inflammatory subtype ILC2, are needed, they write.

In their TBI model, for example, within a day of injury, they found increases in all three ILC subtypes in the meninges, the membranous covering of the brain and spinal cord. Also, levels of ILC2 and ILC3 remained higher a year out, along with chronic inflammation as well as about a 50% reduction in activation of AMPK and ongoing problems with energy use.

They found similar patterns of increased proinflammatory ILCs within the dura, the tougher, outmost layer of the meninges that is just under the skull, as well as the cerebral spinal fluid of patients who had experienced a moderate to severe TBI and needed a procedure called a decompressive craniectomy to relieve pressure on their brain. By comparison, ILC levels were low in the cerebrospinal fluid of patients with an excess of fluid in the brain called hydrocephalus.

In their model, when they completely removed the “brake” AMPK, problems worsened, with the biggest increases in the proinflammatory subtypes resulting in relentless inflammation and death.

When they delivered metformin directly into the cerebrospinal fluid to better target ILCs and instead activate AMPK, it expanded the overall pool of ILC subtypes, inhibited the two inflammation-producing subtypes and mice exhibited improved movement and behavior. The commonly used diabetes drug also prompted a similar shift away from proinflammatory T-cells, drivers of the immune response, and toward regulatory T cells, which also dampen inflammation.

AMPK is essentially a switch that metformin is known to flip, says first author Baban. “It drives everything back toward these counter-inflammatory ILC2s,” Dhandapani adds. “It brought the seesaw back under control.”

Baban notes that after a severe attack like a TBI, it can take the body years to bring the resulting inflammation under control and restore homeostasis. The severity of the injury is an important factor in how long it takes to restore balance, Baban says. “We want to bring it out of the chronic mode,” he adds.

They think it’s the ILCs in the protective, three-layer meninges that respond to the 911 call a TBI triggers that can do that. Their findings also likely apply to other acute brain injuries like strokes.

The coordinated development of immune responses profoundly influences brain injury outcomes, they write, and ILCs function like “cerebral immune gatekeepers” relaying information from the brain to the immune system, then deciding which immune cells make it to the brain, where they can start, stop and generally adjust inflammation.

ILCs like to function within cell tissue and they are already present, albeit in small, fairly inactive numbers, in the brain and all body tissue, Baban says. They typically sit on the mucosal border of tissues, like the membranous meninges. When a TBI happens, for example, the ILCs respond to things like tissue fragments and cell contents that get spilled, and that they should not be seeing.

“How does a TBI induce a regulated immune response within the brain is the first question,” Dhandapani says, and they have previously published findings of inflammation-promoting T cells moving in a predictable pattern while inflammation-suppressing regulatory T cells were suppressed. They suspected and now have shown that ILCs are critical to regulation of the immune response to a TBI. The next logical question was can they do something to reduce the proinflammatory environment that lingered.

They also found, as expected, after a TBI, expression of AMPK, a master energy sensor and regulator in the body that makes adjustments like activating glucose, when cell energy gets low, and increasing generation of the cell fuel ATP, was inhibited which increased ILC expansion.

Baban notes that ILCs are very reactive to their immediate surroundings so anything that could manipulate that microenvironment, even diet, might help enable the shift they prompted with the drug metformin.

One of their next steps include exploring the use of cell therapy to directly deliver more ILC2s rather than using metformin to prompt their increase. They also want to know what switches the switch and better understand how the environment inside the brain changes after a traumatic event. That includes better understanding the relationship of the inflammation that lingers but dwindles over time and the ongoing injury that appears to linger with it.

They both note that inflammation is invaluable to the initial response to and recovery from a TBI, that it’s the chronic inflammation that can result that is problematic. Their ultimate goals include fine tuning inflammation in the aftermath of injury to ensure it does not ultimately cause more harm than good.

While more work is still needed, the level and complement of ILCs in the cerebrospinal fluid also may prove a sound biomarker of which patients are at risk for this increasing neurological damage in the weeks and months after their initial injury, they say, and be a way to monitor the effectiveness of treatment as well that activates AMPK.

Immediately following a TBI, there actually is a brief period of hyperactivity, rapidly followed by a prolonged period of decreased glucose consumption by brain cells, which reduces energy, which is associated with a host of problems from seizures to impaired cognition. Reduced AMPK following a brain injury also contributes to brain function problems like impaired cognition and seizures.

ILCs can be found in tissue throughout a developing baby as well as an adult. ILCs also are known to direct macrophages, which can literally scarf up damaged tissue. The dysregulation of ILCs can also lead to autoimmune disease and allergies. Metformin is effective in diabetes by improving the way the body handles insulin and reducing the amount of sugar released by the liver. It’s known effect on AMPK likely also means it lowers inflammation, which is rampant in diabetes.

ILCs have been characterized by MCG and DCG scientists as a SWAT team of immune cells, which they have previously found in breast milk — likely one way mothers afford immune protection to their babies — and in the lip tissue removed from babies who have cleft lip and palate surgery, which likely helps explain typically low infection rates following surgery in a body area typically considered one of the dirtiest. They’ve also found them in the periodontium, the tissue that surrounds and supports the teeth.

The research was supported by the National Institutes of Health.

During experiments, some juvenile sea spiders were able to regrow amputated body parts. (Image credit: Shutterstock) (opens in new tab)Sea spiders possess a remarkable, previously...
Birds that dive underwater — such as penguins, loons and grebes — may be more likely to go extinct than their nondiving kin, a new...
Inspired by sea cucumbers, engineers have designed miniature robots that rapidly and reversibly shift between liquid and solid states. On top of being able to...
Read Time: 7 minutes Rheumatoid arthritis is a disease where immune cells attack healthy cells, resulting in swelling, pain, and stiffness,...
Editors’ Highlights are summaries of recent papers by AGU’s journal editors. Source: Journal of Geophysical Research: Planets  Caves rank among the most impressive geological wonders...
When you think of an amphibian, the first thing to jump to mind is probably a springy frog or a salamander or maybe a giant...