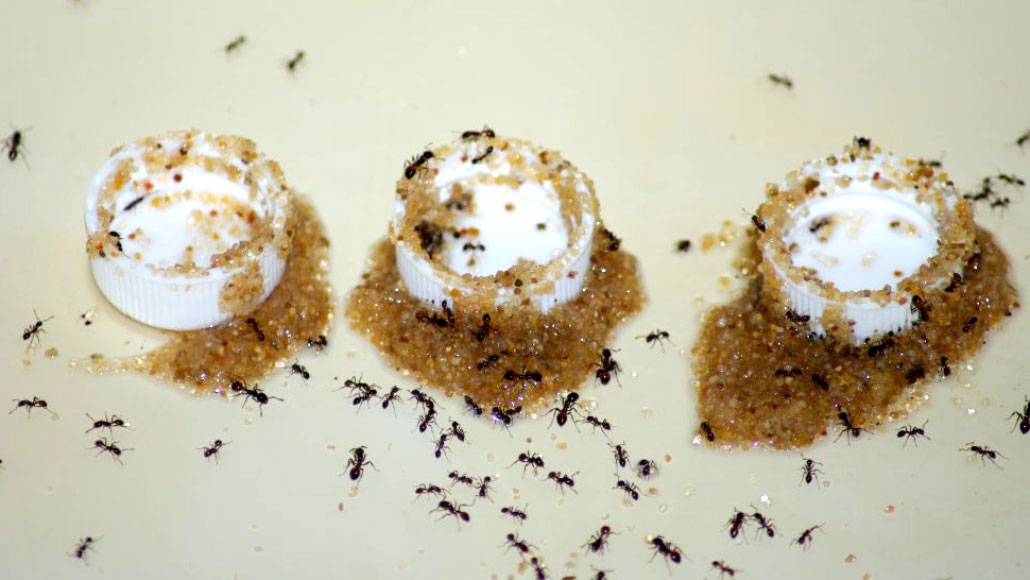 The threat of death is no obstacle for some hungry fire ants. To escape drowning while feeding on sugary water, black imported fire ants built syphons out of sand that moved the water to a safer spot.

A range of animals, including birds, dolphins, primates and even ants, use objects as tools (SN: 12/30/19; SN: 6/25/20; SN: 6/24/19). Ants often employ debris or sand grains to carry food. But this is the first time that the insects have been observed adjusting their tool use to build relatively complex structures in response to a problem, researchers report October 7 in Functional Ecology.

In the wild, black imported fire ants (Solenopsis richteri) typically eat honeydew produced by aphids. In the lab, entomologist Jian Chen of the U.S. Department of Agriculture’s Agricultural Research Service in Stoneville, Miss., and colleagues provided the ants with containers of sugary water. The insects have a hard, water-repellent outer covering called a cuticle, and can typically float on a liquid — and sure enough, the insects floated and fed without a problem.

The researchers then reduced the water’s surface tension with a surfactant to make it more difficult for the ants to float. While some ants drowned, most stopped entering the containers and instead used grains of sand placed nearby to build structures leading from the inside of a container to outside of it. Those structures acted like syphons. Within five minutes of building one, nearly half of the water was drawn out through the sand pathway, allowing the ants to feed safely.

“The fact that ants are building little syphons is new and interesting,” says Valerie Banschbach of Gustavus Adolphus College in Saint Peter, Minn., who was not involved in the study. The insects’ “flexibility to act in a creative way responding to a situation suggests that they have higher cognitive abilities than what is traditionally believed.”

How the insects were able to sense the change in the water’s surface tension is unknown. Some ants that drown initially could be releasing chemical messengers, Chen says, or maybe the ants taste a difference in the water, or a combination of both.

Black imported fire ants are native to South America but have made their way to parts of North America where they are regarded as invasive. The insects can damage crops such as corn, soybeans and okra, and can also sting humans.

A major goal of the project, Chen says, is to develop new pest control measures by better understanding how the ants may behave in their natural habitat. Different types of surfactants are often added to pesticides to help them spread better, the researchers say, so ants could potentially be exposed to similar conditions in the wild as they were in the lab.

For now, Chen is content to marvel at the industrious insects. “Ants are so amazing,” he says. “We have just scratched the surface of the ant world.”