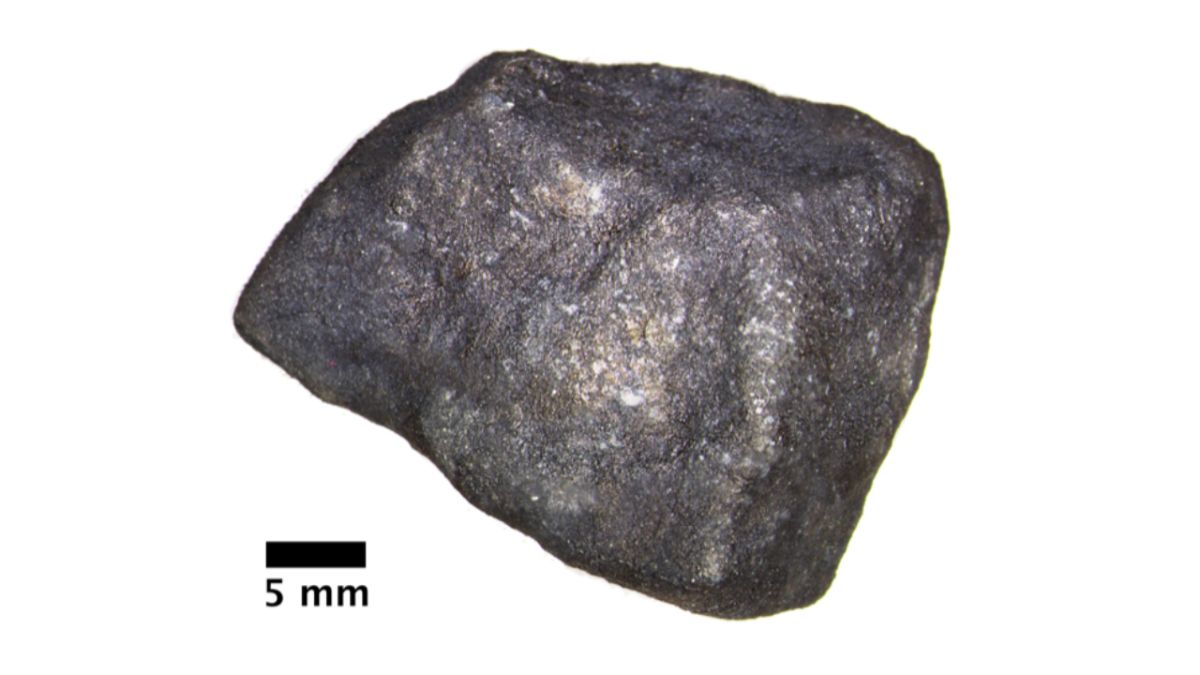 A meteorite that landed on a frozen lake in 2018 contains thousands of organic compounds that formed billions of years ago and could hold clues about the origins of life on Earth.

The meteor entered Earth’s atmosphere on Jan. 16, 2018, after a very long journey through the freezing vacuum of space, lighting up skies over Ontario, Canada, and the midwestern United States. Weather radar tracked the flaming space rock’s descent and breakup, helping meteorite hunters to quickly locate fallen fragments on Strawberry Lake in Hamburg, Michigan.

An international team of researchers then examined a walnut-size piece of the meteorite “while it was still fresh,” scientists reported in a new study. Their analysis revealed more than 2,000 organic molecules dating to when our solar system was young; similar compounds may have seeded the emergence of microbial life on our planet, the study authors reported.

Swift recovery of the meteorite from the lake’s frozen surface prevented liquid water from seeping into cracks and contaminating the sample with terrestrial spores and microbes. This maintained the space rock’s pristine state, enabling experts to more easily evaluate its composition.

In fact, there was so little terrestrial weathering that the fragment brought to Chicago’s Field Museum looked like it had been collected in space, said study co-author Jennika Greer, a doctoral candidate in the Department of the Geophysical Sciences at the University of Chicago, and a resident graduate student at The Field Museum.

When space rocks enter the atmosphere at speeds of several miles per second, the air around them becomes ionized. Extreme heat melts away up to 90% of the meteor, and the rock that survives atmospheric passage becomes encased in a 1-millimeter-thick fusion crust of melted glass, said lead study author Philipp Heck, a curator of meteorites at the Field Museum and an associate professor at the University of Chicago.

That surviving fragment inside the glassy crust is a pristine record of the rock’s geochemistry in space. And despite a fiery fall to Earth, after the vaporized external layers are carried away, rocky meteorites such as this one are very, very cold when they land, Heck told Live Science.

“I’ve heard eyewitness accounts of meteorites falling into puddles after it rained, and the puddle froze because the meteorite was so cold,” he said.

The Michigan meteorite’s ratio of uranium (isotopes 238 and 235) to the element’s decayed state as lead (isotopes 207 and 206) told the scientists that the parent asteroid formed about 4.5 billion years ago. Around that time, the rock underwent a process called thermal metamorphism, as it was subjected to temperatures of up to 1,300 degrees Fahrenheit (700 degrees Celsius). After that, the asteroid’s composition stayed mostly unchanged for the last 3 billion years.

Then about 12 million years ago, an impact broke off the chunk of rock that recently fell in Michigan, according to an analysis of the meteorite’s exposure to cosmic rays in space, Heck told Live Science.

Because the meteorite was altered so little after its initial heating billions of years ago, it was classified as H4: “H” indicates that it’s a rocky meteorite that’s high in iron, while type 4 meteorites have undergone thermal metamorphism sufficient to change their original composition.  Only about 4% of the meteorites that fall to Earth today land in the H4 category.

The meteorite held 2,600 organic, or carbon-containing compounds, the researchers reported in the study. Because the meteorite was mostly unchanged since 4.5 billion years ago, these compounds likely are similar to the ones that other meteorites brought to a young Earth, some of which “might have been incorporated into life,” Heck said.

The transformation from extraterrestrial organic compounds into the first microbial life on Earth is “a big step” that is still shrouded in mystery, but evidence suggests that organics are common in meteorites — even in thermally metamorphosed meteorites such as the one that landed in Michigan, he added. Meteor bombardment was also more frequent for a young Earth than it is today, “so we are pretty certain that the input from meteorites into the organic inventory on Earth was important,” for seeding life, Heck said.

The findings were published online Oct. 27 in the journal Meteoritics & Planetary Science.