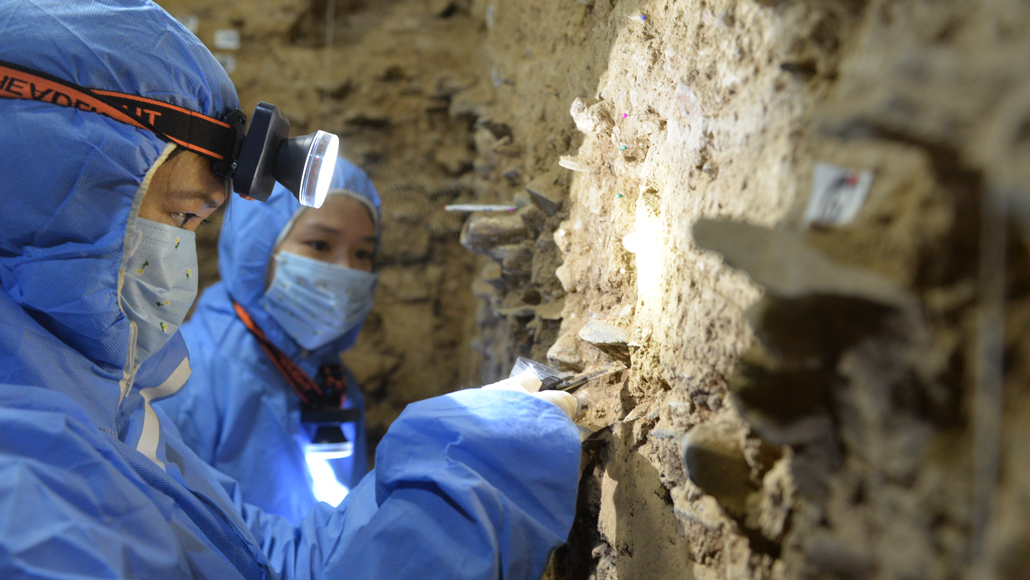 Mysterious, now-extinct members of the human lineage called Denisovans lived at the roof of the world for possibly 100,000 years or more.

Denisovan mitochondrial DNA extracted from sediment layers in Baishiya Karst Cave on the Tibetan Plateau indicates that these humanlike folk inhabited the high-altitude site roughly 100,000 years ago and again around 60,000 years ago, say geoarchaeologist Dongju Zhang of Lanzhou University, China, and her colleagues. These are the first examples of Denisovan DNA found outside of Siberia’s Denisova Cave (SN: 12/16/19).

Cave sediment possibly dating from 50,000 to 30,000 years ago also yielded Denisovan mitochondrial DNA, the scientists report in the Oct. 30 Science. If further research confirms that age estimate, it raises the likelihood that Denisovans survived on the Tibetan Plateau long enough to encounter the first humans to reach those heights as early as 40,000 years ago.

In that case, ancient humans new to the region’s thin air may have acquired advantageous genetic traits for that environment by mating with resident Denisovans. Present-day Tibetans carry a Denisovan gene variant that aids high-altitude survival (SN: 7/2/14), although it’s not clear if interbreeding occurred on the Tibetan Plateau.

Zhang’s group previously identified a lower jaw fossil from Baishiya Karst Cave as having come from a Denisovan that lived at least 160,000 years ago (SN: 5/1/19). That analysis focused on the jaw’s protein structure, not DNA, leaving questions about the find’s evolutionary identity.

In the new study, Denisovan mitochondrial DNA at Baishiya Karst Cave — found in sediment layers that also contained stone tools and pieces of animal bones — displayed close links to mitochondrial Denisovan DNA at Denisova Cave, located about 2,800 kilometers northwest of the Tibetan Plateau site. Overall, the new findings suggest “that Denisovan populations were widespread in eastern Eurasia and had adapted to the Tibetan Plateau for a long time,” Zhang says.

Mitochondrial DNA, typically inherited from the mother, provides a narrower view of a population’s evolutionary past than nuclear DNA, which is inherited from both parents. Zhang’s group has yet to find Denisovan nuclear DNA in Baishiya Karst Cave sediment.

Denisovan genetic evidence remains sparse, says paleogeneticist Carles Lalueza-Fox of the Institute of Evolutionary Biology in Barcelona. But evidence of Denisovan DNA that has been inherited by people today suggests that Denisovans ranged from the frigid Tibetan Plateau to tropical Southeast Asia, says Lalueza-Fox, who did not participate in the new study.

Given their wide Asian distribution, Denisovan populations developed a range of genetic traits and cultural behaviors, he suspects.

A second study in the same issue of Science supports that idea. Nuclear DNA extracted from fossils of two ancient Asian Homo sapiens — one dating to around 34,000 years ago in Mongolia and the other to roughly 40,000 years ago in China (SN: 1/21/13) — includes segments inherited from a specific line of Denisovans, says a team led by paleogeneticist Diyendo Massilani of the Max Planck Institute for Evolutionary Anthropology in Leipzig. Those genetic segments are found in present-day mainland Asians but are distinct from Denisovan DNA that modern Papuans and Aboriginal Australians apparently inherited from ancestors who interbred with another Denisovan population, the scientists report.