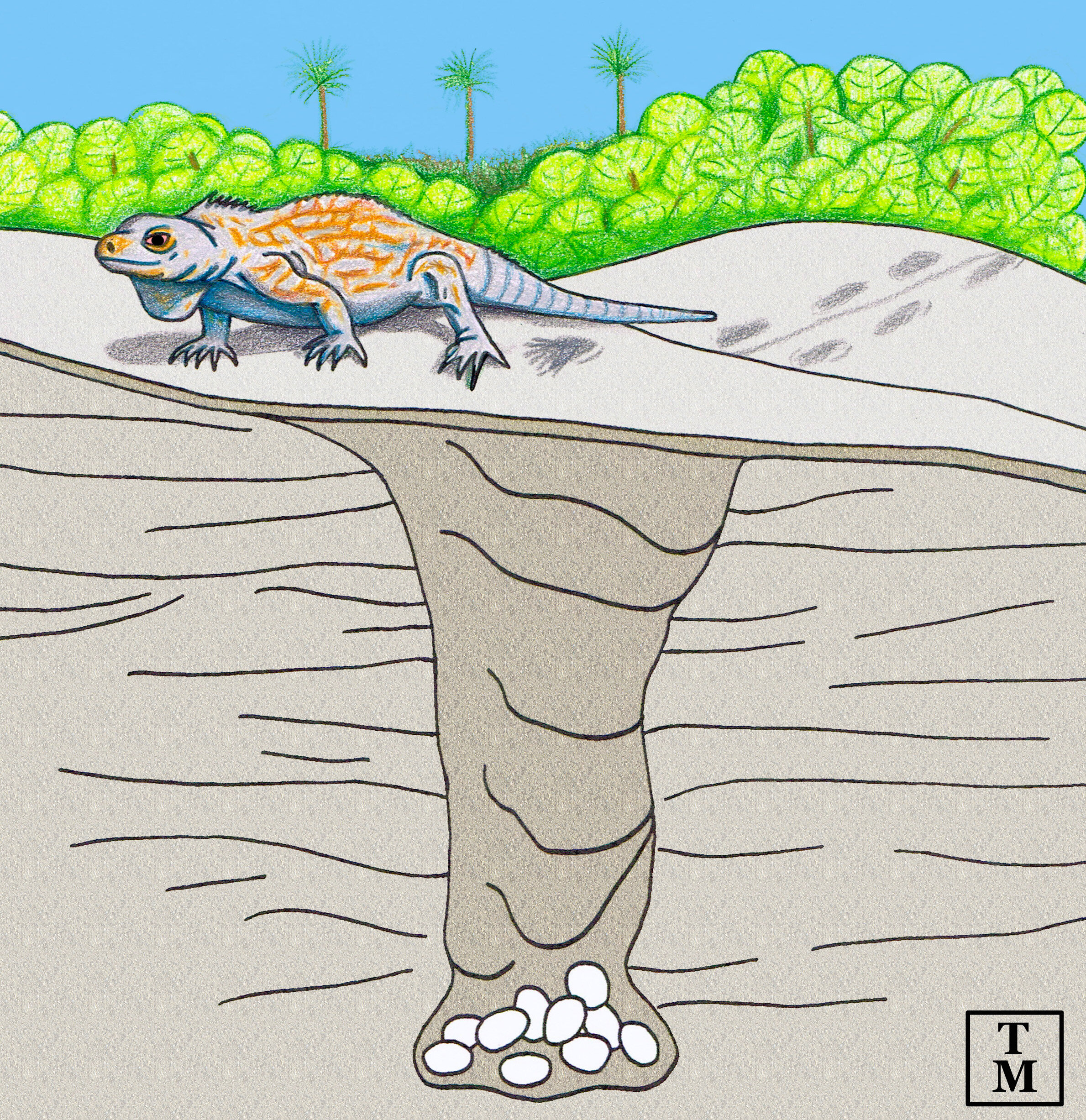 The discovery of the first known fossil iguana nesting burrow, on an outer island of the Bahamas, fills in a gap of scientific knowledge for a prehistoric behavior of an iconic lizard. PLOS ONE published the finding by scientists from Emory University, which also uncovers new clues to the geologic and natural history of the Bahamas.

The fossilized burrow dates back to the Late Pleistocene Epoch, about 115,000 years ago, and is located on the island of San Salvador—best known as the likely spot where Christopher Columbus made his first landfall in his 1492 voyage.

“San Salvador is one of the outer-most islands in the Bahamas chain and really isolated,” says Anthony Martin, a professor in Emory’s Department of Environmental Sciences and senior author of the PLOS ONE paper. “It’s a mystery how and when the modern-day San Salvadoran rock iguanas arrived there. Today, they are among the rarest lizards in the world, with only a few hundred of them left.”

Martin’s specialty is ichnology—the study of traces of life, such as tracks, nests and burrows. He documents modern-day traces to help him identify trace fossils from the deep past to learn about prehistoric animal behaviors.

The current discovery was made during a class field trip to San Salvador as part of the course “Modern and Ancient Tropical Environments,” co-taught by Martin and Melissa Hage, an assistant professor of environmental science at Emory’s Oxford College and a co-author of the paper. Co-authors also include two former undergraduates from the class: Dottie Stearns (now in medical school at the University of Colorado) and Meredith Whitten (who now works in fisheries management for the state of North Carolina).

“No matter how much you read about things in a textbook, a lot of concepts in geology just don’t click until you see them in real life,” Hage says. “It sparks a lot of excitement in students when they experience the process of scientific discovery in the field.”

“Students get to actually see the connections of the past and the present,” Martin adds. “On the north point of San Salvador, for instance, the undulating landscape consists of ancient sand dunes that turned into rock. We can walk across these ancient dunes to look at the rock record and get an idea of how the island changed over time.”

During a stop on the shoreline road on the south end of the island, Martin happened to notice what looked like the trace of a fossil iguana burrow on a limestone outcrop exposed by a roadcut.

The fossil record for iguanas goes back to the Late Cretaceous in South America. Today iguanas are found in tropical areas of Mexico, Central America, South America, the Caribbean and the Bahamas.

Iguanas can grow up to six feet in length, including their tails. Despite their large size, formidable claws and fierce-looking spikes arrayed on their backs, iguanas are mostly herbivores.

The now endangered San Salvador rock iguana, Cyclura riyeli riyeli, and other Cyclura species were plentiful throughout the Bahamas before 1492, when European ships began introducing rats, pigs and other invasive species that feed on the lizards’ eggs.

“One of the cool things about iguanas is that they are survivors,” Martin says. “And one of the main ways that they survive is through burrowing. Digging burrows has helped them survive hurricanes, droughts and other bad things that might be in their environment, like most predators. But burrows are not as helpful when it comes to rats and pigs.”

After further investigation, Martin and his co-authors determined that the trace fossil he noticed on the limestone outcrop was that of a nesting iguana burrow. Ample evidence, including a nearby fossil land-crab burrow discovered by Hage, showed that the outcrop was a former inland sand dune, where iguanas prefer to lay their eggs.

The iguana trace revealed the distinctive pattern of a female creating a nest. “Iguanas have evolved a behavior where a female actually buries herself alive in sand, lays her eggs, and then ‘swims’ out, packing the loose sand behind her as she leaves the burrow to hide the eggs from predators,” Martin says.

This backfilling technique created compaction zones that weathered out over time from the surrounding limestone because they were more durable. “It’s like when you pack sand to build a sandcastle at the beach,” Martin explains. “It’s a similar principle but, in the case of the iguana burrow, it happens underground.”

The lack of burrows from hatchlings digging their way to the surface, however, suggests that the nest failed and that the eggs never produced young.

The researchers were able to date the iguana trace to about 115,000 years ago due to tell-tale red paleosols, or fossilized soils. “The red indicates oxidized iron minerals and there are no native iron minerals in that area,” Martin explains. “But whenever there is a drop in sea level, the Sahara expands in size creating big dust storms. The trade winds take this red dust across the Atlantic and deposit it in the Caribbean.”

The oldest iguana skeletons found on San Salvador only date back less than 12,000 years, in the Holocene Epoch, so the discovery of the iguana trace pushes their presence on the islands back significantly.

Most of the Bahamian islands sit on a relatively shallow platform, making it easy to imagine how iguanas might have migrated there during sea-level lows. San Salvador, however, is a small, isolated island surrounded by deep ocean, setting up the mystery for how the first iguanas arrived there at least 115,000 years ago.

“We’re hoping researchers who study iguana evolution will be inspired by our paper to dig deeper into this question,” Martin says.

The researchers also hope that the paper draws attention to the plight of modern-day San Salvador rock iguanas. “When it comes to species preservation, many people think of panda bears and other cuddly mammals,” Hage says. “Making the connection between how long iguanas have been on the island and how the modern-day San Salvador rock iguanas are endangered may help more people understand why they are worth preserving.”