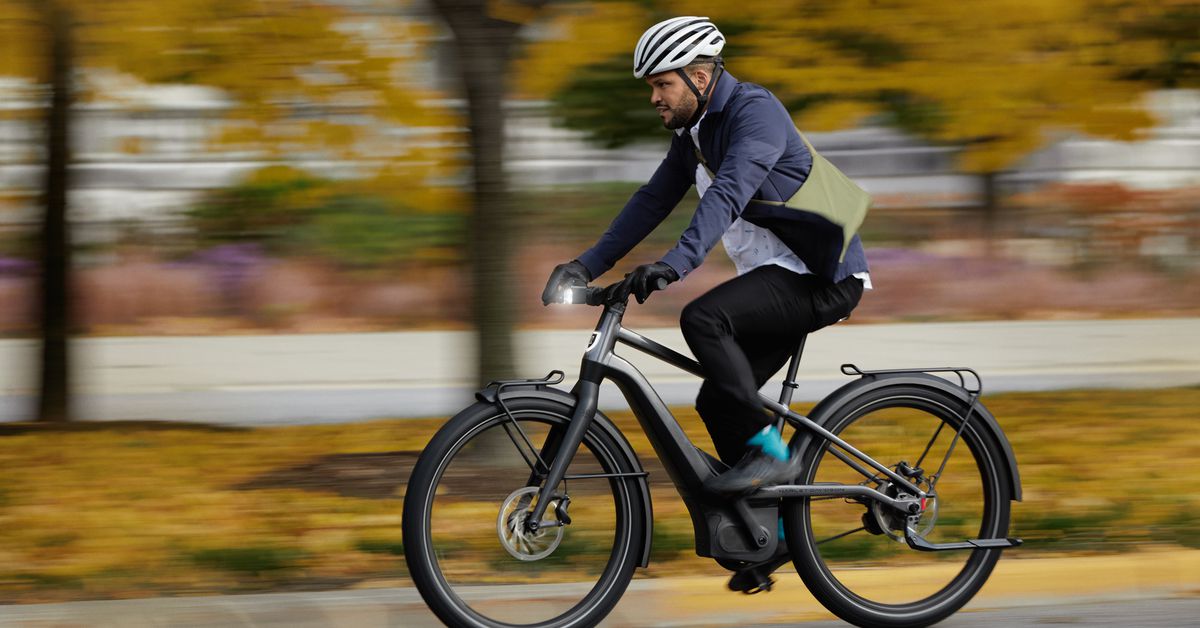 On a recent misty day in Manhattan, I hit 26 miles per hour or so on one of Harley-Davidson’s new e-bikes. I was on a bike trail on the west side of the island, a stretch of path that was either flat or slightly downhill. I felt my legs working, but I’d also gotten a boost from the bike’s onboard motor. “Oh man, that is thrilling,” I said to myself, out loud, in a video note I made for my own records during the ride.

Riding an e-bike can feel both a little confusing and exhilarating: You’re pedaling, but an electric motor provides propulsion, at least until you hit a certain speed. On a typical bike, if you stop pedaling and coast, you’ll quickly figure out if gravity is pulling you downhill or not; and you always know it if you’re hoofing it uphill. An e-bike like the one I was on helps you out, so the subtleties of the terrain below you, as well as your effort-to-speed ratio, can become a little blurry. In another moment, I rode up a hill on a different model at around 12 mph, and didn’t work that hard while doing so.

In short, e-bikes are a fusion of exercise and battery-powered zip. Plenty of companies make them, and now Harley-Davidson has thrown its motorcycle helmet into the ring. More precisely, a company called Serial 1 that was born out of Harley has done so; the motorcycle company is a minority owner. Serial 1 unveiled new e-bikes this autumn, and I had the chance to check them out last Saturday.

The company makes two basic models of bikes. The first is called the Mosh/Cty, an option that’s fairly stripped-down in comparison to the others. It’s intended to be fun and playful and it’s the lightest of the lineup. It weighs some 48 pounds, and it felt relatively manageable, if unwieldy, when I briefly schlepped it into my apartment building during a quick break when I didn’t want to leave it on the street.

The other platform is the Rush/Cty, and it comes in multiple flavors. Unlike the Mosh, the Rush models feature front and rear fenders and storage racks to which you could lash a bag or two. With those accoutrements, the Rush model bikes are intended to be workhorse urban commuter bikes.

E-bikes can be confusing, but a good place to start learning about them is to consider the different classes they come in. Here’s a primer:

Confusingly, New York State defines a class-three e-bike as going no faster than 25 miles per hour; since the laws can vary by state, learn more about the regulations in your area here or ask someone in your local bike shop.

In brief, class-one and -three e-bikes are the most bicycle-like, and all of Serial 1′s bikes fall in those two categories. The Mosh only comes as a category-one bike, whereas the Rush line comes as both category one or as a category-three model, which is the fastest and called the Rush/Cty Speed. You get the idea—there are a lot of different metrics to consider.

Meanwhile, the category-one Rush/Cty model optionally comes with a step-though design, meaning that the top tube is lower and easier to get your leg over. I love step-through bikes because multiple hip surgeries have decreased my flexibility, so anyone who might dislike throwing a leg over a bike should consider one. All of them employ a 250-watt Brose motor that’s located in the bike’s center, where the pedals are, as opposed to positioned in the hub of the front or rear wheel. A belt, not a chain, connects to the rear wheel. The batteries, which range from 529Wh in capacity to 706 Wh, live right near the pedals and motor.

The Rush/Cty Speed model, which is a category-three ebike. (Serial 1/)

Of the two platforms, I preferred the Rush/Cty line—it’s the one geared most toward urban commuting, and is built with a little more stability when going fast than the Mosh/Cty. Plus, it comes with that step-through option. At 2.4-inches wide, the tires are a little skinnier than 2.8-inchers on the Mosh/Cty.

But other design differences set this line apart, too. The Rush/Cty bikes come with a display on the left handlebar that shows data such as your speed, as well as what riding mode you have engaged. You can control how much assistance you receive from the motor—from eco mode to boost—and the 1.5-inch screen reveals which mode you’re in as you click through with a switch below it. The Mosh/Cty bikes lack that, instead using a series of LEDs to indicate your selection, which was confusing when I tried it.

Another key difference between the two lines is that the Rush/Cty models employ a mechanism called an Enviolio continuously variable transmission (CVT) system in the rear hub. That CVT works as a high-tech gear shifter; you set it via Bluetooth to tell it what cadence you’d like to pedal at—such as 75 RPMs—and it does the work internally to make that happen. In other words, the set-up in the rear hub mimics the way you might shift a manual bike when you’re going up a hill and feel your cadence slowing.

None of these electric conveyances are inexpensive. The Mosh/Cty is $3,400, the Rush/Cty is either $4,400 or $4,500 depending on whether you get the less-pricey step-thought model or not, and the Rush/Cty Speed costs $5,000. The sweet spot in the lineup, to my eye, is the $4,400 step-through, but your interests may differ.

Prices north of $4,000 get you into honest-to-goodness motorcycle territory, but then again, an e-bike has perks that a motorcycle doesn’t. To name a few: You can bring one inside your apartment, and ride it on a bike path, and if you avoid those category-two machines, you’re going to have to pedal and thus get some exercise when you ride them.