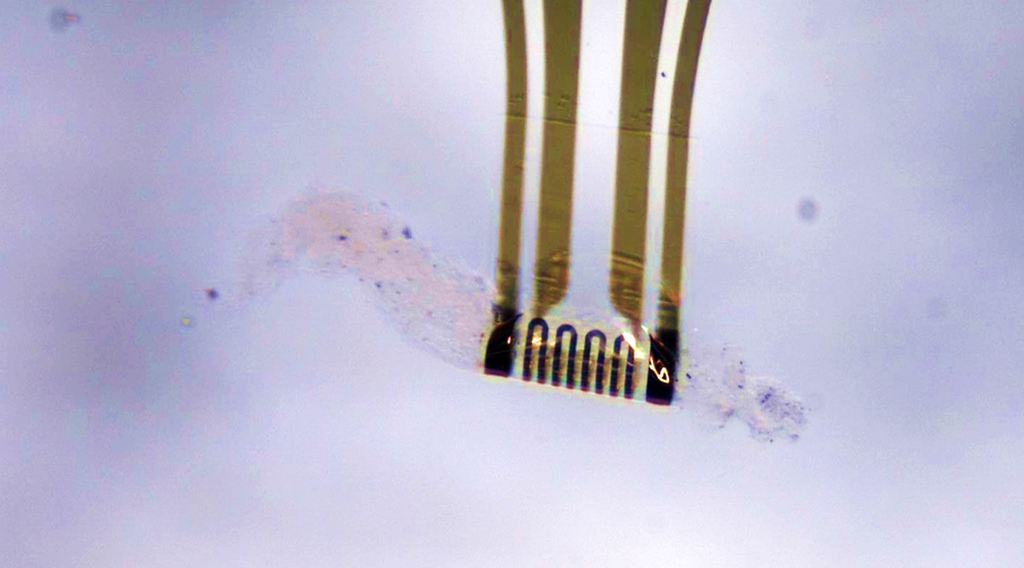 Thanks to ulta-thin sensors and artificial muscles, future flexible microelectronics will be able to take on complex shapes to better interface with delicate biological tissues without causing damage.

Flexible microelectronics are invaluable for medical diagnostic and therapeutic applications and devices that can interface with delicate nerve tissue are making waves in regenerative medicine.

Treating damaged peripheral nerves is currently difficult but highly sought after, as it provides a means of restoring lost senses, recovering the function of extremities, and treating chronic pain. For example, limb prosthetics can be controlled by monitoring and processing the electrical signals of devices placed at specific positions around the corresponding peripheral nerve bundles.

Here, intimate contact between the electronic device and neuronal tissue is essential for direct electric and mechanical coupling. However, the process of mechanically attaching an implant to delicate, gel-like nerve bundles is very challenging and bears a great risk of inflicting further harm to the tissue. This task becomes even more difficult when one considers the size of tiny peripheral neuronal bundles, which can be roughly the size of a human hair.

In this respect, soft microelectronic tools that can serve as “robotic nerve cuffs” capable of independently reshaping themselves to effectively enclose microscopic nerve bundles and thereby forming a mechanical and electrical interface are important to move this technology forward and into a clinical setting.

In this respect, this challenge was addressed in a recent study published in the journal Advanced Intelligent Systems by “robotizing” flexible microelectronics.

By applying common semiconductor manufacturing strategies, a cost-efficient fabrication method for the parallel production of numerous devices was developed to help with scalability. The new device, dubbed a “re-shapeable microelectronic device”, incorporates microelectronic sensors and artificial muscles that independently reshape the implant into the required geometry — which will be unique depending on the nerve bundle being treated — in a controlled fashion.

This allows them to perform tasks such as precise shape adaptation or tissue manipulation on the microscale with a great level of care.

Devices with a strain sensor can directly monitor their own shape, whereas devices with magnetic sensors measure their orientation in space, while movement is controlled by electroactive polymeric structures. For humans, the task of grasping an object requires feedback from sensory cells within the skin to regulate the force applied by the muscles. In the same sense, it was now demonstrated for the first time that, by analyzing sensor signals, such a microtool is capable of controlled positioning, careful manipulation of tissue, and perception of its environment. The device can also automatically detect obstacles in the robot’s path, such as a nerve bundle, and halt its motion or action to help prevent damage of the surgical tool and the tissue its handling.

In future, these devices will be developed along diverging paths to serve as implants or surgical tools such as nerve clamps. Being able to monitor the position and the orientation of surgical tools is critically important for robotic-assisted processes in future application scenarios. For instance, an automated nerve clamp with sensors can keep the target tissue in place during surgery or implant attachment and compensate for movements to help minimize any tearing or damage during the procedure.

With this advancement, it is hoped that similar devices will now evolve into more complex and fully integrated systems, allowing for better shape control and comprehensive perception of their environments. The next important step will be the transition to more sophisticated 3D geometries for more sophisticated tools. These could be created using stimuli responsive materials systems and self-assembling 2D films that fold, roll, or buckled into 3D micro-robots. These devices could take the shape of microscopic manipulators (robotic arms), cuff implants, or robotic catheters, and operate in a semi-autonomous fashion where reshaping follows a digital instruction.

With the intrinsic properties of the presented devices – softness, ability to reshape themselves, awareness of their surrounding – they could be a valuable addition to the toolkits of surgeons who operate on soft and sensitive tissues and where high precision is crucial. Peripheral nerves are a prime example, although this technology could be expanded to the assessment of other biological tissues such as the brain, blood vessels, and cell clusters.

This proof-of-concept study further contributes to the field of robot-assisted surgery, which carries the promise of more precise, yet less invasive interventions. Smart surgical tools with reliable feedback on their position and actions will become invaluable in this sense, as surgeons manipulate smaller and softer structures. It’s even possible that pre-clinical tests could start in the next 5 years, exploring first generation of soft-microrobotic tools.