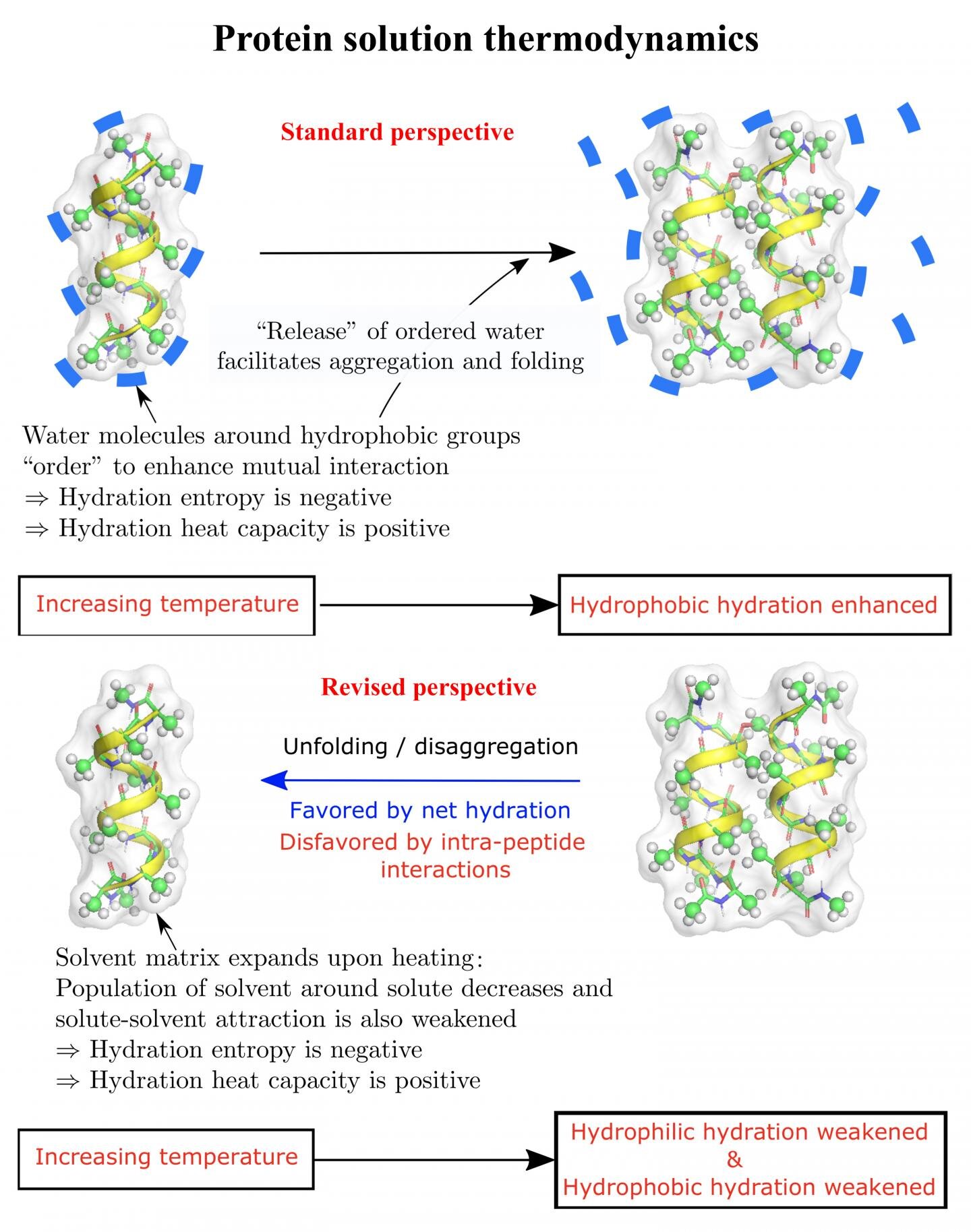 It’s a long-standing assumption that the presence of water influences how proteins fold. A new study is challenging the details.

A paper in the American Chemical Society’s Journal of Physical Chemistry Letters shows proteins that presumably evolved to avoid water as they fold may actually behave in ways scientists did not anticipate.

That discovery could change how scientists think about hydrophobic (water-avoiding) and hydrophilic (water-attracting) interactions in solutions, according to a Rice University engineer.

Collaborators from Rice and Tulane universities and the Johns Hopkins University School of Medicine created atom-level models of polypeptides that showed folding is also influenced by thermal expansion of the solvents they occupy, but not in ways that match previous assumptions.

The long-held view is that hydrophobic amino acids, which avoid water by coming together as efficiently as possible, are a dominant force in protein folding, said Dilip Asthagiri, an associate research professor of chemical and biomolecular engineering at Rice’s Brown School of Engineering.

The new study shows temperature, a factor not always included in protein folding models, also influences the phenomenon. That should prompt a reassessment of how proteins folding in a solution are stabilized, according to the researchers.

“There are many proteins that are intrinsically disordered that don’t fold at all,” Asthagiri said. “One way the non-folding has been rationalized has been to look at the balance of hydrophobic groups and charged groups and, assuming the latter dominate, conclude the polypeptide does not fold.

“We showed in 2017 that in a model of an intrinsically disordered peptide that has no side chains, hydrophilic effects can in fact overwhelm the collapse driven by the still-substantial hydrophobic effects and drive the unfolding, even in the absence of charged residues,” he said. “That study and the one published earlier in 2016 highlighted the role of hydrophilic effects. But we didn’t look at temperature effects.”

So the team led by Asthagiri set out to model precisely how polypeptides, a classification that includes proteins in biological systems, fold and unfold as they connect with water at various temperatures.

When the researchers calculated the free energy of a hydrated deca-alanine peptide sequence, along with its side-chains, they found that forces of attraction between the solvent and peptide play a role as well, particularly when more than one peptide is involved.

They found that in the temperature ranges they modeled, the matrix of solvent around the polypeptides expands when heated, decreasing the population of solvent molecules that are around and contacting the peptides. This can make binding interactions between the solvent and peptides less favorable.

They noted the effect is minor for small molecules in a solvent, but amplified for larger peptides and proteins. They also said the theory suggests hydrophilic effects can contribute to the denaturation, or unfolding, of proteins in cold solutions.

“The solution environment is an important contributor to the structure of proteins,” said Tulane chemical engineer and co-corresponding author Lawrence Pratt, a longtime mentor to Asthagiri. “Everything the solution does, including the water, has to do with how these proteins put themselves together and the functions they perform.”

He said hydrophobic effects in protein folding have been recognized since the 1940s. “It’s a rather tricky thing, though, because it has unusual temperature dependencies,” Pratt said. “You know, things live or die if you change the temperatures.

“Some hydrophobic effects get stronger when you raise the temperature, so things get to be more stable,” he said. “But Dilip shows this increase in strength with increasing temperature can come from other places, including effects that all chemists would say are hydrophilic.

“Both hydrophobic and hydrophilic effects come into play,” he said. “And they’re competing, and they’re collaborating. And so being able to distinguish them individually in a very convincing way is a big step in sorting all this behavior out.”