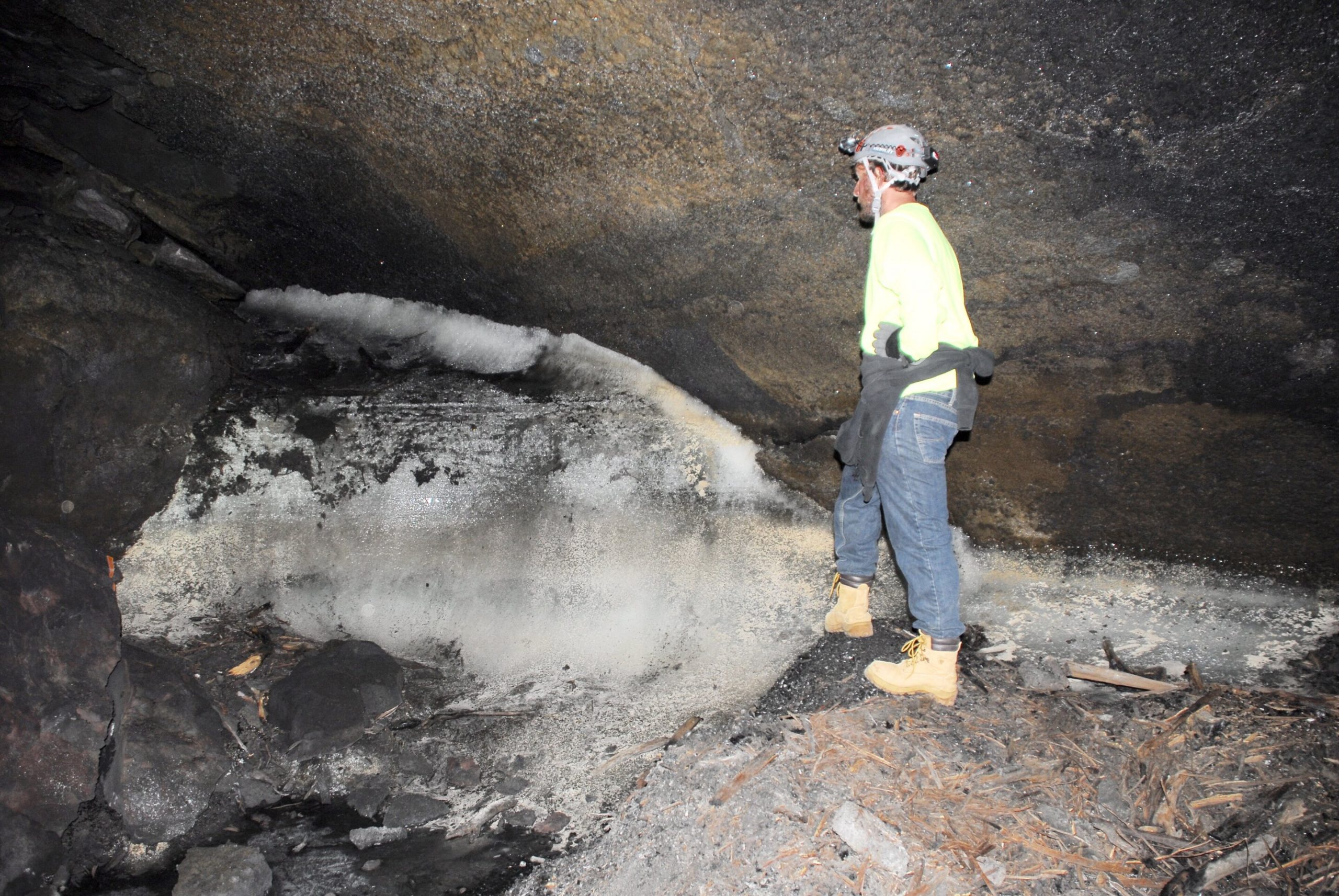 For more than 10,000 years, the people who lived on the arid landscape of modern-day western New Mexico were renowned for their complex societies, unique architecture and early economic and political systems. But surviving in what Spanish explorers would later name El Malpais, or the “bad lands,” required ingenuity now being explained for the first time by an international geosciences team led by the University of South Florida.

Dating back as far as AD 150 to 950, the water gatherers left behind charred material in the cave indicating they started small fires to melt the ice to collect as drinking water or perhaps for religious rituals. Working in collaboration with colleagues from the National Park Service, the University of Minnesota and a research institute from Romania, the team published its discovery in Scientific Reports.

The droughts are believed to have influenced settlement and subsistence strategies, agricultural intensification, demographic trends and migration of the complex Ancestral Puebloan societies that once inhabited the American Southwest. Researchers claim the discovery from ice deposits presents “unambiguous evidence” of five drought events that impacted Ancestral Puebloan society during those centuries.

“This discovery sheds light on one of the many human-environment interactions in the Southwest at a time when climate change forced people to find water resources in unexpected places,” Onac said, noting that the geological conditions that supported the discovery are now threatened by modern climate change.

“The melting cave ice under current climate conditions is both uncovering and threatening a fragile source of paleoenvironmental and archaeological evidence,” he added.

Onac specializes in exploring the depths of caves around the world where ice and other geological formations and features provide a window to past sea level and climate conditions and help add important context to today’s climate challenges.

Their study focused on a single lava tube amid a 40-mile swatch of treacherous ancient lava flows that host numerous lava tubes, many with significant ice deposits. While archaeologists have suspected that some of the surface trails crisscrossing the lava flows were left by ancient inhabitants searching for water, the research team said their work is the earliest, directly dated proof of water harvesting within the lava tubes of the Southwest.

The study characterizes five drought periods over an 800-year period during which Ancestral Puebloans accessed the cave, whose entrance sits more than 2,200 meters above sea level and has been surveyed at a length of 171 meters long and about 14 meters in depth. The cave contains an ice block that appears to be a remnant of a much larger ice deposit that once filled most of the cave’s deepest section. For safety and conservation reasons, the National Park Service is identifying the site only as Cave 29.

In years with normal temperatures, the melting of seasonal ice near cave entrances would leave temporary shallow pools of water that would have been accessible to the Ancestral Puebloans. But when the ice was absent or retreated in warmer and dryer periods, the researchers documented evidence showing that the Ancestral Puebloans repeatedly worked their way to the back of the cave to light small fires to melt the ice block and capture the water.

They left behind charcoal and ash deposits, as well as a Cibola Gray Ware pottery shard that researchers found as they harvested a core of ancient ice from the block. The team believes the Ancestral Puebloans were able to manage smoke within the cave with its natural air circulation system by keeping the fires small.

The discovery was an unexpected one, Onac said. The team’s original goal in its journey into the lava tube was to gather samples to reconstruct the paleoclimate using ice deposits, which are slowly but steadily melting.

“I have entered many lava tubes, but this one was special because of the amount of charcoal present on the floor in the deeper part of the cave,” he said. “I thought it was an interesting topic, but only once we found charcoal and soot in the ice core that the idea to connect the use of ice as a water resource came to my mind.”

Unfortunately, researchers are now racing against the clock as modern climate conditions are causing the cave ice to melt, resulting in the loss of ancient climate data. Onac said he recently received support from the National Science Foundation to continue the research in the lava tubes before the geological evidence disappears.

Provided by
University of South Florida