Ghostly circles in the sky can’t be explained. And astronomers are excited. 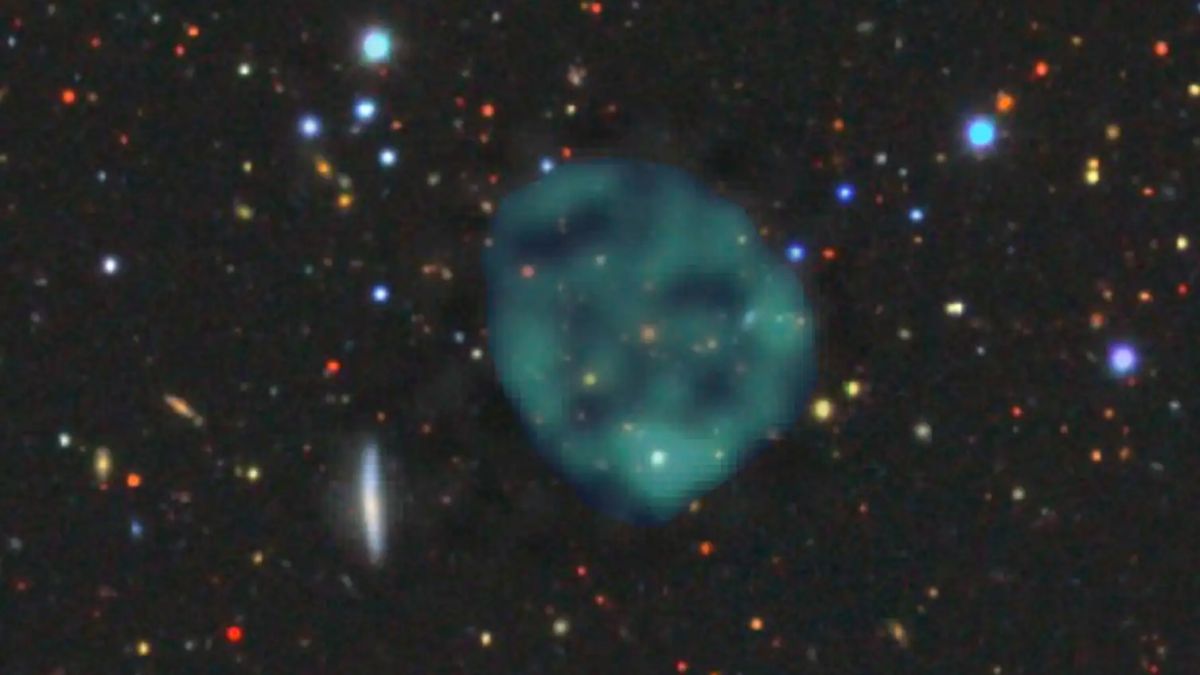 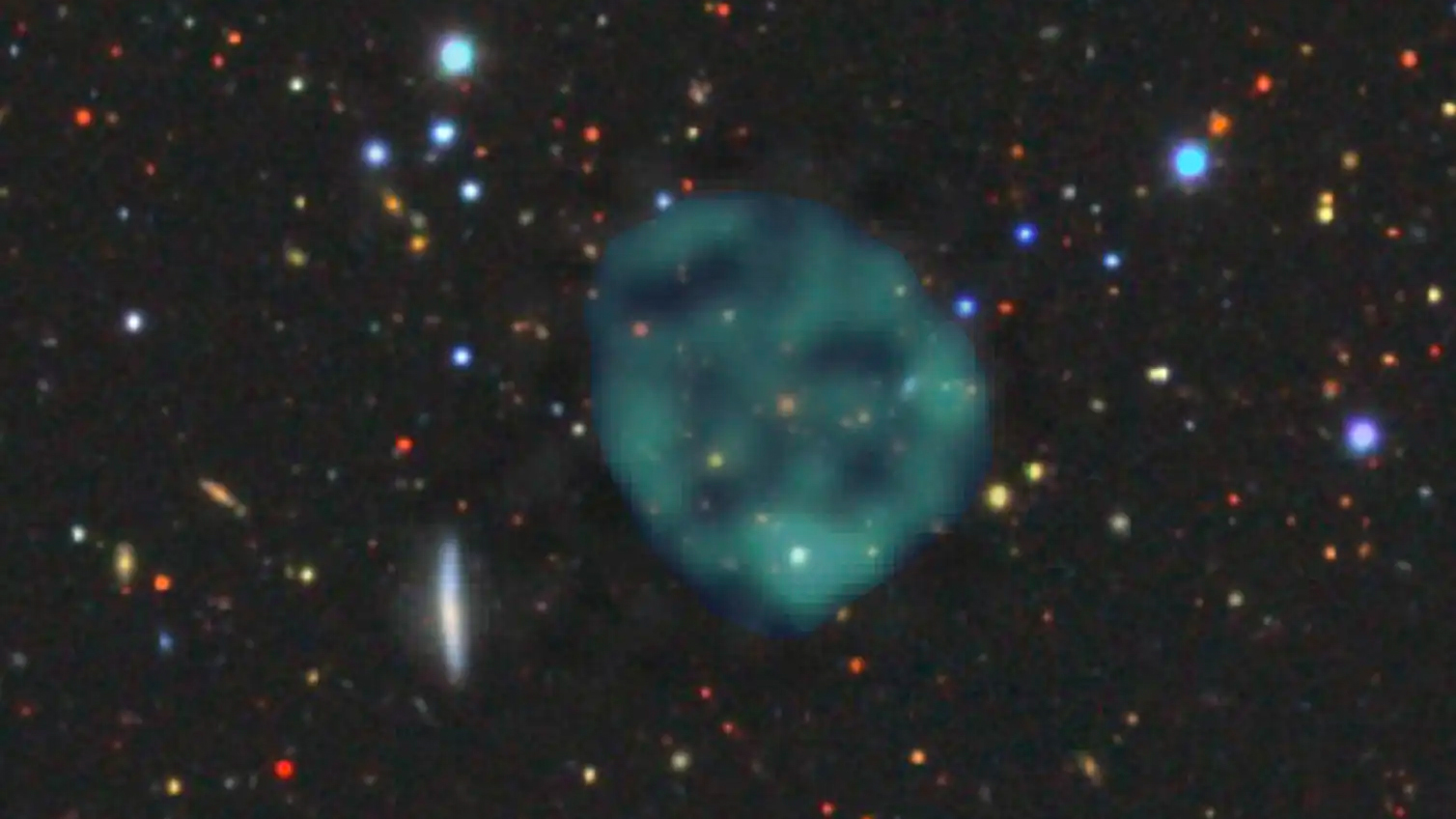 Among them, labeled by Anna as WTF?, was a picture of a ghostly circle of radio emission, hanging out in space like a cosmic smoke-ring. None of us had ever seen anything like it before, and we had no idea what it was. A few days later, our colleague Emil Lenc found a second one, even more spooky than Anna’s.

Anna and Emil had been examining the new images from our pilot observations for the Evolutionary Map of the Universe (EMU) project, made with CSIRO’s revolutionary new Australian Square Kilometre Array Pathfinder (ASKAP) telescope.

EMU plans to boldly probe parts of the Universe where no telescope has gone before. It can do so because ASKAP can survey large swathes of the sky very quickly, probing to a depth previously only reached in tiny areas of sky, and being especially sensitive to faint, diffuse objects like these.

I predicted a couple of years ago this exploration of the unknown would probably make unexpected discoveries, which I called WTFs. But none of us expected to discover something so unexpected, so quickly. Because of the enormous data volumes, I expected the discoveries would be made using machine learning. But these discoveries were made with good old-fashioned eyeballing.

Our team searched the rest of the data by eye, and we found a few more of the mysterious round blobs. We dubbed them ORCs, which stands for “odd radio circles”. But the big question, of course, is: “what are they?”

At first we suspected an imaging artefact, perhaps generated by a software error. But we soon confirmed they are real, using other radio telescopes. We still have no idea how big or far away they are. They could be objects in our galaxy, perhaps a few light-years across, or they could be far away in the Universe and maybe millions of light years across.

When we look in images taken with optical telescopes at the position of ORCs, we see nothing. The rings of radio emission are probably caused by clouds of electrons, but why don’t we see anything in visible wavelengths of light? We don’t know, but finding a puzzle like this is the dream of every astronomer.

We know what they aren’t

We have ruled out several possibilities for what ORCs might be.

Could they be supernova remnants, the clouds of debris left behind when a star in our galaxy explodes? No. They are far from most of the stars in the Milky Way and there are too many of them.

Could they be the rings of radio emission sometimes seen in galaxies undergoing intense bursts of star formation? Again, no. We don’t see any underlying galaxy that would be hosting the star formation.

Could they be Einstein rings, in which radio waves from a distant galaxy are being bent into a circle by the gravitational field of a cluster of galaxies? Still no. ORCs are too symmetrical, and we don’t see a cluster at their centre.

In our paper about ORCs, which is forthcoming in the Publications of the Astronomical Society of Australia, we run through all the possibilities and conclude these enigmatic blobs don’t look like anything we already know about.

So we need to explore things that might exist but haven’t yet been observed, such as a vast shockwave from some explosion in a distant galaxy. Such explosions may have something to do with fast radio bursts, or the neutron star and black hole collisions that generate gravitational waves.

Or perhaps they are something else entirely. Two Russian scientists have even suggested ORCs might be the “throats” of wormholes in spacetime.

From the handful we’ve found so far, we estimate there are about 1,000 ORCs in the sky. My colleague Bärbel Koribalski notes the search is now on, with telescopes around the world, to find more ORCs and understand their cause.

It’s a tricky job, because ORCS are very faint and difficult to find. Our team is brainstorming all these ideas and more, hoping for the eureka moment when one of us, or perhaps someone else, suddenly has the flash of inspiration that solves the puzzle.

It’s an exciting time for us. Most astronomical research is aimed at refining our knowledge of the Universe, or testing theories. Very rarely do we get the challenge of stumbling across a new type of object which nobody has seen before, and trying to figure out what it is.

Is it a completely new phenomenon, or something we already know about but viewed in a weird way? And if it really is completely new, how does that change our understanding of the Universe? Watch this space!