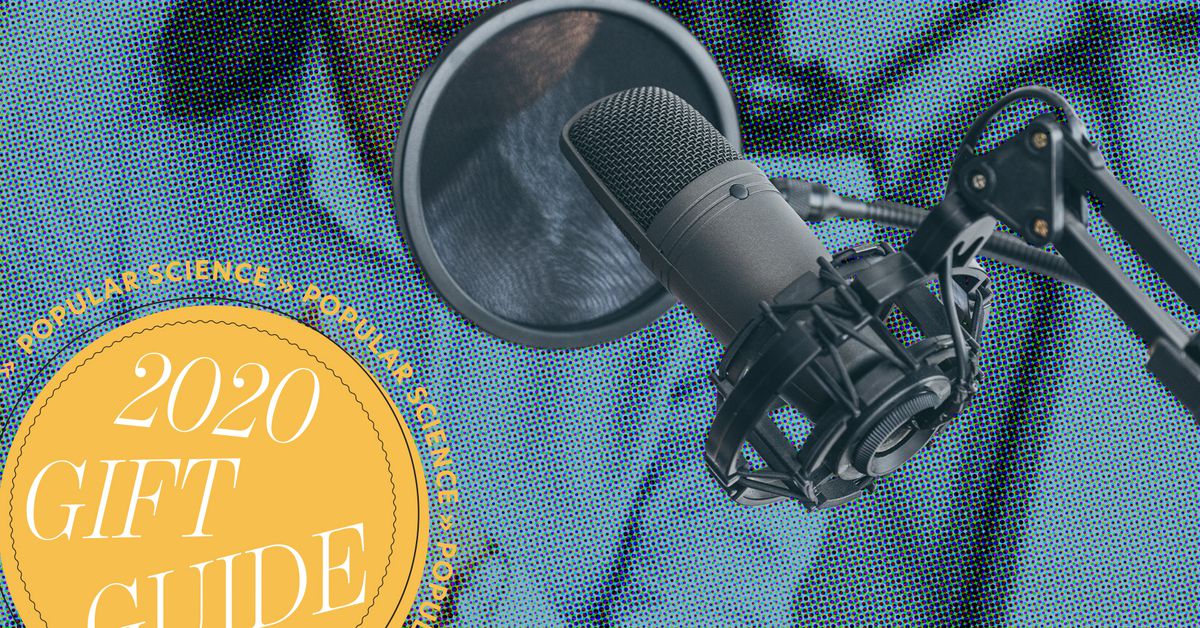 Whether you want to share a mic or keep it to yourself, you’ll need the right sound equipment. (Andrew Lozovyi/Deposit Photos/)

Last year, when the holidays rolled around, we had no idea how important video chatting was about to become. Now, it’s common to spend large chunks of our days and nights gabbing at a grid of faces on a screen for everything from live podcast shows to heated arguments about how many slices of cheese belong in a grilled cheese sandwich. While it’s the people on the other side of those calls that make them worth while, a little production value never hurts. These gifts will make anyone who receives them look and sound their best, whether they’re chatting away on happy hours or trying to nab a lucrative sponsorship for their streaming channel.

Ring lights only make sense if they surround the camera lens. If you’re looking for flattering illumination, this is a much better bet. (Amazon /)

Despite what ring light devotees might tell you, the best way to get flattering light on a video call is with a flat, soft source of illumination. The Elgato Key Light isn’t the cheapest option on the market, but it has a powerful array of 160 LEDs spread evenly across its square panel that create an even glow to prevent shiny spots on your face. The color is adjustable from cool to warm, so you can also dial in the perfect setting to match the rest of the lighting in your room. And because it uses LEDs instead of typical bulbs, it will stay cool even during the fourth hour of your grandfather’s story.

Turn your room into a rave. (Amazon /)

The light on your face is crucial, but illuminating the rest of your room can elevate you beyond that “I’m sitting in my own bedroom and could nap at any moment” vibe. This kit includes three 16.4-foot reels of LED strips with adhesive backs for easy installation. You can use the included remote or a smartphone app to control them as they change color and execute 28 dynamic patterns depending on how flashy you’re feeling in the moment. The system is expandable, so if the person receiving the gift wants to fully transform their home into a the inside of a gaming PC, they can buy a couple more strips and let the flashing commence.

It’s a huge leap from your computer’s built-in mic, which sounds like the drive through at Taco Bell. (Amazon /)

Unless you’re planning to make it big with your series of quarantine ukulele covers, you don’t need a pricey microphone to sound great. The Blue Snowball iCE gives you many of the same benefits you’d expect to find in a mic more than twice its price. It connects easily to a computer via USB and doesn’t require any installation. There’s only one condenser inside, so it’s meant specifically to pick up on one person talking.

When you’re not talking into it, you can pretend it’s the Pixar lamp’s big sibling. (Amazon /)

Holding a microphone is fun when you’re pretending to host a game show, but it gets tedious during a staff meeting. The Innogear stand clamps directly onto your desk and stays wherever you put it thanks to spring tension. It’s strong enough to hold up even professional mics and installs without any screws or bolts. It also includes a pop filter to prevent peaking levels every time you say statements with lots of “P”, “T”, and “K” sounds in them, like “Popular Science is a fantastic publication.”

Why worry about tidying up your bedroom when you can just block it out? (Amazon /)

Ideally, we’d all chat in front of picture-perfect backdrops filled with books and awesome artwork that make us look smart. That’s not always possible, though, and it’s not exactly classy to try and fashion a backdrop out of your old shower curtain. Fovitec’s 5′ x 6.5′ pop-up backdrop is neutral gray on one side and blue on the other in case you want to use video effects to make it look like you’re chatting in an elaborate mansion or the bridge of a spaceship. When you’re done with the background, simple twist the flexible metal frame until it’s a flat, 28-inch disk that fits into the included carrying case.

Pretend this is the void and scream into it. It makes you a better neighbor. (Amazon /)

The Monoprice Microphone Isolation shield is lined with pointy foam insulation that doesn’t reflect sound waves back as you talk. That keeps annoying echoes away from your microphone and drastically improves the overall quality of your audio. It also has a built-in microphone mount right in the sweet spot for maximum sound dampening. It folds up to about a third of its size for storage, but we recommend leaving it up all the time in case you get the urge to stand in front of it and shout, “turn my headphones up!”

Wired headphones don’t cut out or have their batteries die just as your friend is finishing a hilarious story. Or maybe it was a sad story—you don’t know because you didn’t hear the ending. Sennheiser’s headphones are built for studios: The earcups and headbands are busting with plush padding, which makes them comfortable, but also bottles up sound so it doesn’t bleed back into your microphone and cause an echo. The snug fit also creates excellent noise isolation so you’re not bothered by the sounds of your neighbors fighting or getting romantic.

Use that applause button to let everyone watching your stream know that you’re killing it. (Amazon /)

For people really looking to take streaming up a notch, the Roland GO:LIVECAST is a great way to jump into using studio gear. It connects directly to a smartphone and allows wannabe broadcasters to add effects like applause and musical cues to their productions. Connect another phone via Wi-fi and it can turn your home cooking show into a full-on, two-camera production with animated titles and a rockin’ theme song that cost you $40 on Craigslist.