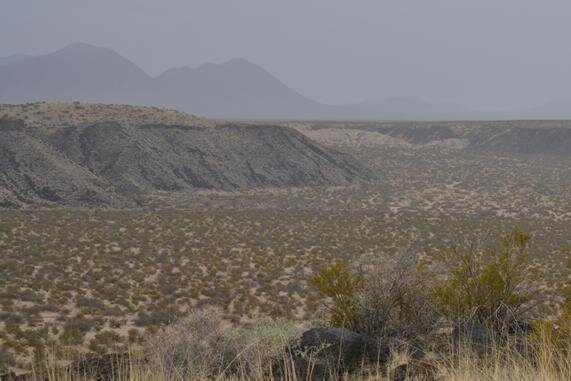 Rocks from the Rio Grande continental rift have provided a rare snapshot of active geology deep inside Earth’s crust, revealing new evidence for how continents remain stable over billions of years, according to a team of scientists.

“We tend to study rocks that are millions to billions of years old, but in this case we can show what’s happening in the deep crust, nearly 19 miles below the surface of the Earth, in what geologically speaking is the modern day,” said Jacob Cipar, a graduate student in geosciences at Penn State. “And we have linked what’s preserved in these rocks with tectonic processes happening today that may represent an important step in the development of stable continents.”

The team, led by Penn State scientists, found evidence that heat from the mantle is melting the lower crust at the rift, where tectonic forces are pulling apart and thinning the lithosphere, or the crust and upper mantle that make up the rigid outer layer of Earth.

Heating the continental crust is considered important to its development. But the process is often associated with crustal thickening, when continental plates collide and form mountains like the Himalayas, the scientists said.

“Our research suggests that these rocks that have been thought of as related to mountain building may have actually been cooked by a thinning lithosphere like what’s happening in the modern-day Rio Grande rift,” Cipar said. “And more broadly, thinning lithosphere may be more important than previously recognized for stabilizing continents and preventing them from sinking back into the mantle.”

The researchers recently reported their findings in the journal Nature Geoscience.

Earth’s continents feature a unique silicon-rich, buoyant crust that allows land to rise above sea level and host terrestrial life, the scientists said. The crust also contains heat-producing elements like uranium that could destabilize it over geological time.

Heating the crust creates molten rock that carries those elements toward the surface, resulting in a cooler and stronger lower crust that can protect continents from being absorbed into the mantle, the scientists said. But questions remain about the sources of that heat.

“We are suggesting that thinning of the lithosphere is really the removal of a barrier that keeps that heat away from the crust,” said Andrew Smye, assistant professor of geosciences at Penn State and Cipar’s adviser. “Removing or thinning that barrier at the Rio Grande rift appears to be what is generating the heat needed to initiate this process of stabilizing continental crust. And this has been overlooked in our understanding of how continents become so stable.”

The scientists tapped into rocks brought to the surface 20,000 years ago by volcanoes in New Mexico. The rocks are considered geologically young and are significant because they retain the context of the lower crust, the scientists said.

“In contrast, what we see in the rock record around the world is that oftentimes what it takes to get them up to the surface has disrupted their original relationship with the lower crust,” said Joshua Garber, a postdoctoral researcher at Penn State. “This makes it really challenging to use older rocks to try to understand tectonics, and it makes the Rio Grande probably the best place to do this research.”

The scientists used analytical techniques to link the age of minerals in the rocks to the pressure and temperature they faced as they made their way through the crust.

Similarities between the pressure and temperature path from the Rio Grande lower crust and rocks from other locations suggest that a thinning lithosphere is important for stabilizing Earth’s continents, the scientists said.

“The snapshots of data we do have from other locations really nicely aligns with what we found in the Rio Grande rift,” Garber said. “So that tells us this is not just happening now in the western United States. This shows the guts of continents have probably undergone this globally at least for the last billion years.”

Probing the origin of the mantle’s chemically distinct ‘scars’