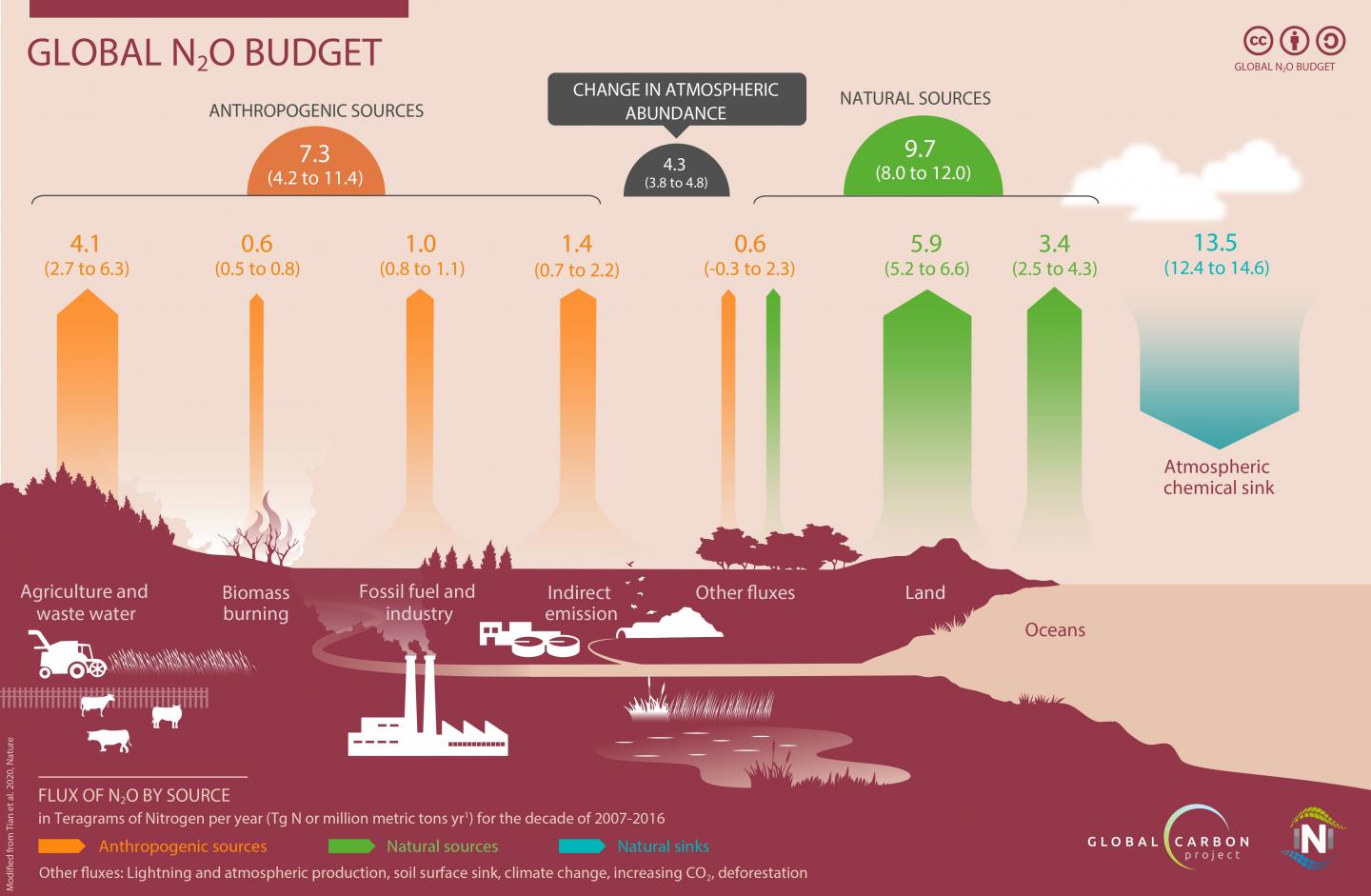 Concentration of dinitrogen oxide – also referred to as nitrous oxide – in the atmosphere increases strongly and speeds up climate change. In addition to CO2 and methane, it is the third important greenhouse gas emitted due to anthropogenic activities. Human-made nitrous oxide emissions are mainly caused by the use of fertilizers in agriculture. Growing demand for food and feed in future might further increase the emissions. This is one finding of an international study published in Nature, in which Karlsruhe Institute of Technology (KIT) was one of the partners. (DOI: 10.1038/s41586-020-2780-0)

Dinitrogen oxide (N2O), also called nitrous oxide, is about 300 times as climate-damaging as carbon dioxide. It stays for about 120 years in the atmosphere. Although it exists in the form of traces only, it has a very strong greenhouse effect and superproportionally contributes to anthropogenic climate change. Nitrous oxide concentration in the atmosphere today already is about 20% higher than the pre-industrial value. In past decades, increase has accelerated due to emissions from various anthropogenic activities. In total, worldwide N2O emissions in 2016 were about ten percent higher than those of the 1980s. An international study coordinated by researchers from Auburn University in Alabama/USA now presents the most comprehensive evaluation of all nitrous oxide sources and sinks so far. Under the title “A comprehensive quantification of global nitrous oxide sources and sinks,” it is now reported in Nature. The conclusion: As a result of strongly increasing nitrous oxide emissions, the climate goals of the Paris Agreement are at stake.

“The increase in nitrous oxide concentration in the atmosphere is mainly caused by the use of nitrogen-containing fertilizers. These include both synthetic fertilizers and organic fertilizers from animal excretions,” says ecosystems researcher Almut Arneth, Professor of the Atmospheric Environmental Research Division of KIT’s Institute of Meteorology and Climate Research (IMK-IFU), KIT’s Campus Alpine in Garmisch-Partenkirchen. She participated in the study. “From 2007 to 2016, agricultural production caused about 70% of anthropogenic global increase in N2O emissions since the 1980s.” As global demand for food and feed is growing, researchers fear that also global N2O concentration will further increase and contribute to global warming.

According to the study, anthropogenic nitrous oxide emissions are highest in East and South Asia, Africa, and South America. Increases are particularly high in threshold countries, such China, India, and Brazil, where crop cultivation and animal husbandry have grown strongly. In Europe, by contrast, anthropogenic N2O emissions decreased, both in agriculture and chemical industry. Scientists explain this decrease by various incentives and protection measures. Agriculture in many West European countries has started to use nitrogen more efficiently in order to reduce water pollution, among others. “Our work provides an in-depth understanding of the N2O budget and its impacts on climate,” Arneth explains. “It also shows that there are ways to reduce emissions, such as measures in agriculture that concern both production and consumption. Such measures do not only benefit the climate, but also biodiversity and human health.”

57 scientists from 48 research institutions in 14 countries were involved in the study “A comprehensive quantification of global nitrous oxide sources and sinks” managed by Professor Hanqin Tian from Auburn University. The study was made within the framework of the Global Carbon Project and the International Nitrogen Initiative.

More about the KIT Climate and Environment Center: http://www.klima-umwelt.kit.edu/english

Being “The Research University in the Helmholtz-Association,” KIT creates and imparts knowledge for the society and the environment. It is the objective to make significant contributions to the global challenges in the fields of energy, mobility and information. For this, about 9,300 employees cooperate in a broad range of disciplines in natural sciences, engineering sciences, economics, and the humanities and social sciences. KIT prepares its 24,400 students for responsible tasks in society, industry, and science by offering research-based study programs. Innovation efforts at KIT build a bridge between important scientific findings and their application for the benefit of society, economic prosperity, and the preservation of our natural basis of life. KIT is one of the German universities of excellence.

This press release is available on the internet at http://www.kit.edu.