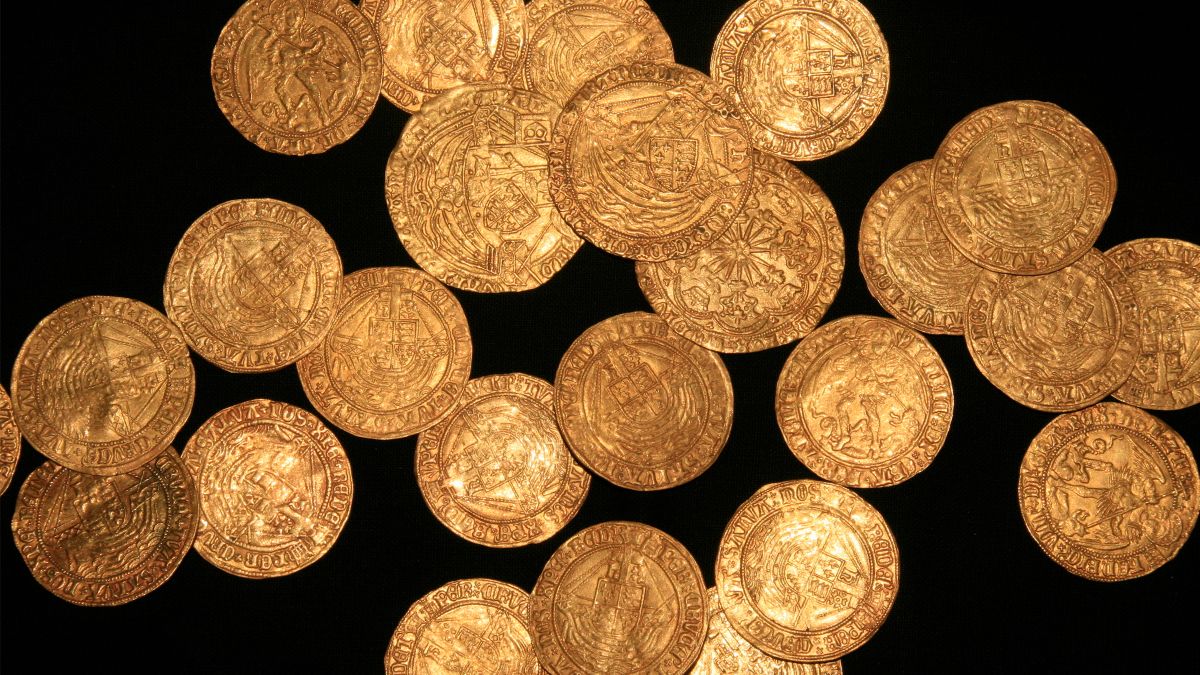 A family in England was weeding their garden when they unearthed a valuable treasure — a buried hoard of gold coins dating back to the 1400s, depicting English monarchs from Edward IV to Henry VIII.

The hoard — a stash of 63 gold coins and one silver coin — contains money minted over a period of nearly 100 years, from the late 15th to the 16th centuries. Four of the coins feature Henry VIII and, curiously, one of the initials of three of his wives: Catherine of Aragon, Anne Boleyn and Jane Seymour.

Upon finding the cache, the family, in the New Forest district of Hampshire, a county in southeastern England, notified the British Museum, which runs the Portable Antiquities Scheme (PAS). This program partners with local people who find historical artifacts in the United Kingdom, so the findings can be documented and studied, the British Museum said in a statement Thursday (Dec. 10).

The coins were likely buried in about 1540, while King Henry VIII was still alive, but it’s unknown whether this burial spot was like a piggy bank, where someone regularly deposited coins, or whether the hoard was buried all at once, according to the British Museum. Whoever saved the coins, however, was a person of means: The collection was worth about £24 at the time, the equivalent of $18,600 (£14,000) today, Barrie Cook, a curator of medieval and early modern coins at the British Museum, told The Guardian. That’s much more than the average annual wage during Tudor times.

In all likelihood, a wealthy merchant or clergy member buried the hoard, John Naylor, a coin expert from the Ashmolean Museum at the University of Oxford, told The Guardian. “You have this period in the late 1530s and 1540s where you have the Dissolution of the Monasteries, and we do know that some churches did try to hide their wealth, hoping they would be able to keep it in the long-term,” he said.

The newfound coins are “an important hoard,” Naylor added. “You don’t get these big gold hoards very often from this period.”

As for the coins themselves, it’s a mystery why the initials of Henry’s wives were present. In 1526, Henry and Thomas Wolsey, an English archbishop, statesman and cardinal of the Catholic Church, redid the monetary system, changing coins’ weights and beginning new denominations, such as the five-shilling gold coin, The Guardian reported.

“Not only does he change denominations, he has this very strange decision of putting his wife’s initial on the coin,” Cook said. Such a move had no precedent. And given Henry VIII’s many marriages (six in all), the initials changed frequently. But after his third marriage to Jane Seymour, the mother of Edward VI who died shortly after childbirth, Henry discontinued the practice, meaning that his following wives (Anne of Cleves, Catherine Howard and Catherine Parr) did not see their initials on English money.

The hoard is just one of over 47,000 artifacts documented by PAS in 2020. Another newfound, notable hoard includes the 50 South African Krugerrand minted during apartheid in the 1970s. This stash, also found buried in a garden, was unearthed in the town of Milton Keynes, about 50 miles (80 kilometers) northwest of London. Each of the 50 coins weighs 1 oz (28 grams) and is made of solid gold, the museum reported.

“How they ended up in Milton Keynes and why they were buried are, for the moment, a mystery,” museum officials wrote in the statement. An official in Milton Keynes is trying to find the coins’ original owner or heirs.

Other notable finds documented by PAS include:

To browse through other findings in PAS, visit the database.

Understanding room temperature superconductivity one step closer thanks to researchers looking at the effects of pressure. Understanding the nature of superconductivity is one of the...
Two women are bundled up in cold weather clothing while walking during a frigid weather snap, Friday, Feb. 3, 2023, in Portsmouth, N.H. Windchills in...
The moon exerts a previously unknown tidal force on the "plasma ocean" surrounding Earth's upper atmosphere, creating fluctuations that are similar to the tides in...
A newfound species of frog doesn’t ribbit. In fact, it doesn’t make any sound at all. Many frogs have unusual characteristics, from turning translucent to...
In a study publishing in the journal Cell Stem Cell on February 2, researchers show that brain organoids -- clumps of lab-grown neurons -- can...
A type of material that allows the flow of electricity with little resistance is called a conductor. Like the copper in the electrical wiring in...