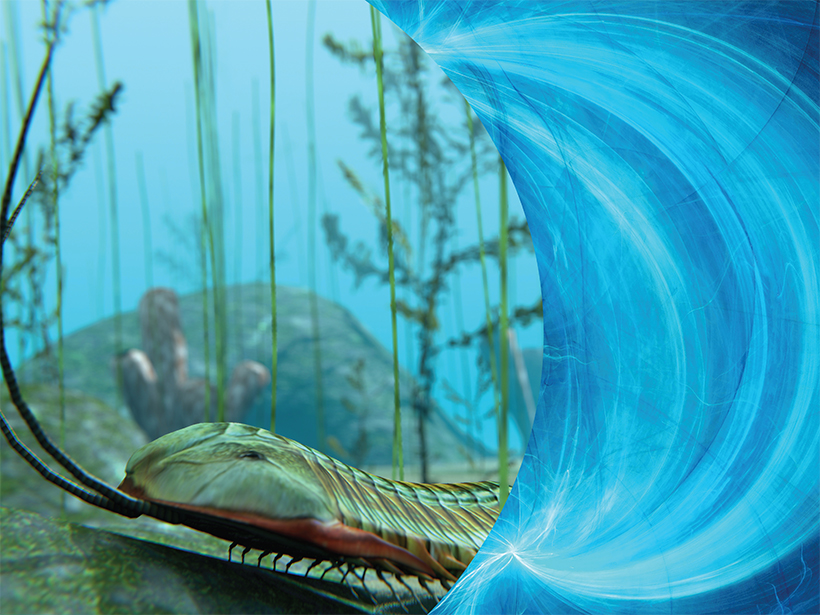 Earth’s magnetic field, in some ineffable respects, is reminiscent of the exquisite poem attributed to the semihistorical Buddhist monk Budai (sometimes referred to as Hotei), considered by some to be an incarnation of the future Buddha, Maitreya:

The geomagnetic field similarly permeates myriad aspects of life. For instance, a diverse range of organisms, from microscopic magnetotactic bacteria to all major groups of vertebrates, have evolved ingenious and intricate mechanisms to detect the magnetic field and to use this information for orientation and locomotion.

Humans, of course, have learned to use the geomagnetic field in countless advantageous ways, with the magnetic compass and its associated 2,000-year history as the quintessential example. On the other hand, our dependence on electromagnetic devices means that we are highly susceptible to geomagnetic storms that perturb our planet’s magnetic field, with devastating economic losses potentially ranging into the trillions of dollars [Lingam and Loeb, 2017]. More broadly, the magnetic field generated by Earth’s dynamo (the geodynamo) is responsible for our planet’s substantial magnetosphere, which is believed to protect Earth against the deleterious effects of the solar wind.

The wide range of benefits stemming from Earth’s magnetic field have been invoked by many scientists to argue that a planetary magnetic field is a chief requirement for habitability [Lammer et al., 2009]. That Mars, a planet currently sans strong global magnetic fields, lacks a substantial atmosphere is often interpreted as a consequence of its dynamo shutting down about 4 billion years ago, which thus subjected the atmosphere to erosion by the solar wind.

Much about Earth’s planetary magnetism, however, remains poorly understood. Of the multifarious questions that spring to mind, two stand out: When and how did Earth’s dynamo originate and evolve over time? And what are the consequences of a magnetic field for habitability and life? Both questions span rapidly evolving research domains and touch upon many interconnected and subtle scientific issues. Hence, the discussion of them here, which offers an overview of major points, is limited and somewhat subjective in scope [Lingam, 2019].

The History of Earth’s Dynamo

Certain minerals on Earth, such as magnetite, are particularly sensitive to the geomagnetic field because of their ferrimagnetic nature, and measurements of their magnetization have enabled us to deduce Earth’s magnetic field strength at different times in the past. The oldest evidence for a geodynamo comes from analysis of magnetic inclusions in 4.2-billion-year-old zircon crystals retrieved in Australia [Tarduno et al., 2020], which collectively indicate that Earth’s magnetic field then may have been roughly half as strong as it is today.

The formation of Earth’s inner core is considered crucial in the further evolution of the geodynamo.

This putative discovery raises more questions, including about the processes responsible for the geodynamo’s genesis and functioning during the Hadean and Archean eons (spanning 2.5-4.5 billion years ago). One hypothesis, among others, suggests that the high temperatures produced during giant impact events in this period facilitated the transport of magnesium to the core, where precipitation of magnesium-containing minerals yielded enough energy to power the geodynamo [Badro et al., 2016]; however, some scientists have critiqued this model on the grounds that the energy produced is insufficient. It has also been suggested that precipitation of silicon dioxide from the core may have contributed to the sustenance of the early geodynamo.

The nucleation (i.e., formation) of Earth’s inner core is considered crucial in the further evolution of the geodynamo [Smirnov et al., 2016], chiefly because the latent heat liberated during crystallization of the inner core, in tandem with ongoing chemical differentiation (in which materials of different compositions separate within Earth based on density and chemical affinity), is capable of powering the geodynamo. The importance of inner core nucleation (ICN) is widely recognized, but its timing is still uncertain.

It is tempting to speculate about whether deep connections exist between the nucleation of Earth’s inner core and the increase in the strength of Earth’s magnetic field on the one hand, and the diversification of animals on the other.

Magnetic field intensities inferred from rock samples dating to the Mesoproterozoic (roughly 1–1.5 billion years ago) have been argued as evidence for ICN occurring in this interval. In contrast, analysis of magnetic inclusions in crystals from the Ediacaran (about 565 million years ago) is compatible with the onset of ICN during that time. The discrepancy in the possible ages for the onset of ICN may stem from systematic biases in earlier paleomagnetic intensity data sets due to processes such as viscous remanent magnetization, which is induced in rocks with long-term exposure to magnetic fields, thereby making measured paleomagnetic intensities appear higher than the actual values when the rocks were formed. Chemical and thermal alteration of magnetic minerals over time can also complicate interpretations of paleomagnetic intensities.

If nucleation of Earth’s inner core occurred during the Ediacaran, a striking coincidence emerges. The Ediacaran was an unusually dynamic period on Earth, characterized, for instance, by the intermittent oxygenation of the ocean and by rapid shifts in evolution (especially in animals [Droser et al., 2017]). These shifts culminated in the so-called Cambrian explosion, when multicellular life seemingly diversified into most of the lineages we recognize today. It is tempting to speculate about whether deep connections exist between ICN and the increase in the strength of Earth’s magnetic field on the one hand, and the diversification of animals on the other, as suggested by some authors.

It has been proposed that the stronger magnetic field in the Cambrian was responsible for shielding the atmosphere from erosion by the solar wind, mitigating the flux of cosmic rays reaching the surface, and preventing ozone depletion. These processes might have contributed to the diversification of animals by reducing high-energy radiation and preserving oxygen levels. If proven correct, this paradigm would represent a compelling illustration of the interplay between astrophysics and biology.

The existence of a global magnetic field raises questions about how it affects habitability and life. This is a question wide in scope, and the discussion here is limited to only a couple of salient effects. It is commonly thought that magnetic fields are necessary to protect planetary atmospheres from erosion by the solar wind, which hastens the acceleration and escape of atmospheric particles through electromagnetic interactions. But how valid is this premise?

There are tentative grounds to suppose that a weak or even absent geomagnetic field may not have been as much a hindrance to life as originally anticipated.

Researchers have simulated the escape of oxygen ions from Earth’s atmosphere by adapting a model constructed for Mars, finding that the escape rate could be elevated by a factor of roughly 1,000 if the magnetic field strength is extremely weak. However, more recent numerical models and analytical studies have found that the relationship between a planet’s magnetic field and the escape rate of oxygen ions is highly nonlinear. In particular, across a range of magnetic field strengths—and contrary to expectations—the escape rate might actually decrease when the field strength is weakened [Lingam and Loeb, 2019]. Hence, there are tentative grounds to suppose that a weak or even absent geomagnetic field may not have been as much a hindrance to life as originally anticipated, at least insofar as the field’s effects on atmospheric erosion by the solar wind are concerned.

Earth’s magnetospheric shielding acts as a protective barrier against high-energy solar particles and galactic cosmic rays (GCRs) (only the latter are considered here, as the former are more intermittent). When GCRs pass through Earth’s atmosphere, they lead to formation of secondary particles like muons and pions. And when GCRs and their derivatives reach the surface, they can damage biomolecules like DNA. The cumulative impact of such radiation is measured by a quantity known as the equivalent dose rate. With a weaker magnetic field, the equivalent dose rate is anticipated to increase because a higher flux of GCRs reaches the surface, and vice versa. This trend is indeed borne out by state-of-the-art numerical simulations, but the amplification is modest [Glassmeier and Vogt, 2010]: For an Earth-like atmosphere, the equivalent dose may only increase by a factor of about 2 if the geomagnetic field is absent.

Incoming high-energy particles also affect life through an indirect, but important, avenue. They can react with the two most abundant constituents of Earth’s atmosphere, forming nitrogen oxides that subsequently react with and deplete stratospheric ozone. Ozone depletion enhances the flux of UV radiation to the surface, which has a number of well-known deleterious consequences for life, ranging from damaged biomolecules to acute physiological stress. Multiple numerical models indicate that a weakened or absent magnetic field could result in a 20% or greater increase in UV radiation penetrating to the surface, especially at the polar regions [Glassmeier and Vogt, 2010]. Whether such a boost, which may not sound like much at first glance, is high enough to cause widespread damage to our planet’s biota is unclear given the complexity of Earth’s biosphere and its nonlinear interactions with the lithosphere, hydrosphere, and atmosphere.

By resolving whether Earth’s magnetic field played a significant role in modulating the evolution of life, we will be better positioned to consider whether a magnetic field is necessary for a planet to be habitable in the first place.

There is promising evidence that Earth’s geodynamo initiated as early as 4.2 billion years ago and that the crystallization of Earth’s inner core, which paved the way for the geodynamo of today, occurred more than half a billion years ago. Although the changes in Earth’s magnetic field wrought by these transitions were likely profound, the concomitant effects on our planet’s biosphere are much less clear. Earth’s organisms must have been affected to some degree, but fathoming the magnitude and nature of these repercussions necessitates further research synthesizing knowledge from geology, astronomy, plasma physics, microbiology, evolutionary biology, and other disciplines.

By resolving the riddle of whether Earth’s magnetic field played a significant role in modulating the evolution of life, we will be better positioned to consider the related question of whether a magnetic field is necessary for a planet to be habitable in the first place. This endeavor has major implications for understanding the origins and evolution of life on Earth; for applications, such as the development of artificial magnetospheres, that could affect humanity’s future in many ways; and for addressing that age-old question, Are we alone? Let us pursue this quest in all earnestness.