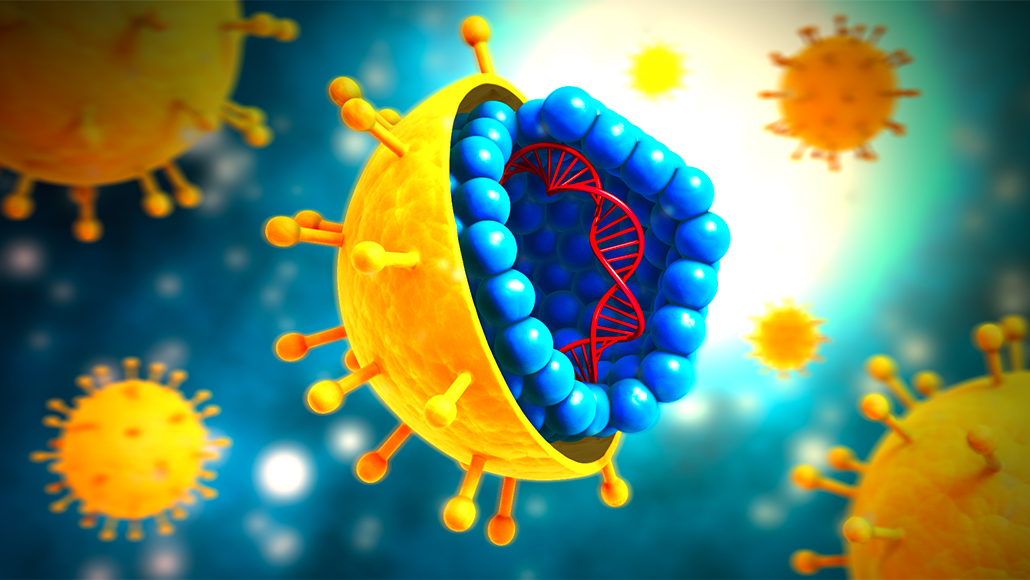 Three virologists have won the Nobel Prize in physiology or medicine for the discovery of the hepatitis C virus.

Harvey Alter, of the U.S. National Institutes of Health in Bethesda, Md., Michael Houghton, who is now at the University of Alberta in Edmonton, Canada, and Charles Rice, now of The Rockefeller University in New York City, will split the prize of 10 million Swedish kronor, or more than $1.1 million, the Nobel Assembly of the Karolinska Institute announced October 5.

About 71 million people worldwide have chronic hepatitis C infections. An estimated 400,000 people die each year of complications from the disease, which include cirrhosis and liver cancer. Today, the major way people get infected is through contaminated needles used for injecting intravenous drugs, but when the researchers made their discoveries in the 1970s, ’80s and ’90s, blood transfusions were an important source of hepatitis C infection.

“This is a bit overdue,” says Dennis Brown, chief science officer of the American Physiological Society. It often takes decades before scientific achievements are recognized by the Nobel committee. One reason for the recognition this year may be COVID-19, Brown says. “This keeps virology and viruses in the public eye,” he says. “It might be a push to put science at the forefront, to say when we put money into this and when we have well-funded people working on these viruses, we can actually do something about them.”

Alter worked at a large blood bank at NIH in the 1960s when hepatitis B was discovered. (That discovery won the 1976 Nobel Prize in physiology or medicine (SN: 10/23/76).) Blood could be screened so that people wouldn’t get that virus from a transfusion, but patients were still developing hepatitis. Alter and colleagues showed in the mid- and late 1970s that a new virus, dubbed “non-A, non-B” was causing the infection, and that the virus could be used to transmit the disease to chimpanzees (SN: 4/1/78).

Just over a decade later, Houghton, working at the pharmaceutical company Chiron Corp. (now part of Novartis), developed a way to pull fragments of the virus’s genetic material from the blood of infected chimpanzees and developed a test to screen out hepatitis C-infected blood (SN: 5/14/88) . It took so long to isolate the virus’s genetic material because Houghton “had to wait until the technology was available,” Brown says.

Over seven years, “we must have tried 30 or 40 methods” to extract, or clone, the virus Houghton said during a news conference. Eventually, he and colleagues turned to a method using bacteriophage — viruses that infect bacteria — developed by researchers at Stanford University.

“It took another two years for us to get that to work,” Houghton said. “And when it did work, we got one clone.” Over six to nine months the researchers confirmed again and again that the small piece of genetic material that they had cloned was from the virus. “It wasn’t one eureka moment,” he said. And it took even more work to convince other scientists that they’d snagged the virus.

The blood test Houghton and colleagues developed was used to screen blood all around the world and dramatically decreased hepatitis C infections, said Gunilla Karlsson Hedestam, an immunologist at the Karolinska Institute in Stockholm who described the laureates’ contributions. Before then, “it was a bit like Russian roulette to get a blood transfusion” said Nils-Göran Larsson, a member of the selection committee.

But a question still remained about whether the hepatitis C virus alone was responsible for the infection. Rice and colleagues working at Washington University in St. Louis stitched together genetic fragments of the virus pulled from the blood of infected chimpanzees into a working virus and demonstrated that it could cause hepatitis in animals. “This provided conclusive evidence that the cloned hepatitis C alone could cause the disease,” Karlsson Hedestam said.

It also set the stage for work that would lead to the development of drugs, which can now cure most people who are infected with hepatitis C, Richard Lifton, president of The Rockefeller University said during a news conference. For many years after Houghton identified the virus’s genetic makeup, it still wasn’t possible to grow hepatitis C in cells in lab dishes — a necessary step in drug development.

“I remember at the time, I thought this would be a very short-lived area of investigation for us,” Rice said in the news conference. He thought that with the information Houghton’s group had uncovered pharmaceutical and biotechnology companies would rapidly take over. But hepatitis C proved more challenging. Rice and colleagues eventually discovered a missing piece from the end of the virus that allows it to replicate in cells. Rice’s previous work on the yellow fever virus led him to suspect that the missing piece was there.

Rice is continuing work to understand how hepatitis C produces varied outcomes, from mild disease that people are able to clear on their own to serious liver scarring and cancer that may require a liver transplant. “It’s a happy situation that it’s become more difficult to get damaged liver tissue from hepatitis C infected people,” Rice said in an interview with Science News. So, to study how the virus damages the liver, the researchers have turned to a similar virus that infects rats and mice. Like many other virology labs, though, that work is on hold while the researchers turn their attention to studying SARS-CoV-2, the virus that causes COVID-19.

Houghton is now working on a vaccine against hepatitis C. “Therapeutics alone do not control epidemics,” he said. “You need a vaccine to prevent [infection], not just drugs to treat.”

Thomas Perlmann, secretary general of the Nobel Assembly, had to try several times before he reached Alter and Rice to give them news of their win. The third time his phone rang before 5 a.m. EDT, Alter said he got up angrily “thinking this was another political solicitation or somebody wanted to extend the warranty on my car.” His anger soon turned to shock. “It’s otherworldly. It’s something you don’t think will ever happen, and sometimes don’t think you deserve to happen. And then it happens,” he said in an interview posted at nobelprize.org. “In this crazy COVID year, where everything is upside down, this is a nice upside down for me.”

Houghton discovered he’d won when his University of Alberta colleague Lorne Tyrrell phoned him shortly after 3 a.m. PDT at his home in San Francisco. Tyrell had gotten up early to hear who won and called to congratulate his colleague.

Houghton previously turned down the Canada Gairdner Award because the prize committee refused to honor his collaborators at Chiron. “I tried to persuade them to be more inclusive and more modern,” he said. But “it would be really presumptuous of me to turn down a Nobel.”

The terms of Alfred Nobel’s will establishing the prizes dictate that no more than three people can share the prize. That often leads to researchers who have made important discoveries being left out. For instance, some researchers predicted that German virologist Ralf Bartenschlager of Heidelberg University would share the prize with Rice, because Bartenschlager developed methods of growing hepatitis C in cells that enabled drug development.

“This rule of three that the Nobel committee adheres to is, in this case, unfortunate,” Rice says. But because this prize deals with the discovery of the virus, the door may still be open for Bartenschlager and others to win later for the development of drugs against the virus.

The laureates all emphasized that science builds on the work of others and takes time, consistent funding and tenacity.

“It’s a long story, a 50-year saga, and I think it’s a tribute to non-directed research, when you don’t know where you’re going but you just keep moving,” Alter said in a news conference. “If you find something and you don’t know what it is, or why it is, keep looking, keep persisting. With a persistent virus, persisting research paid off.”