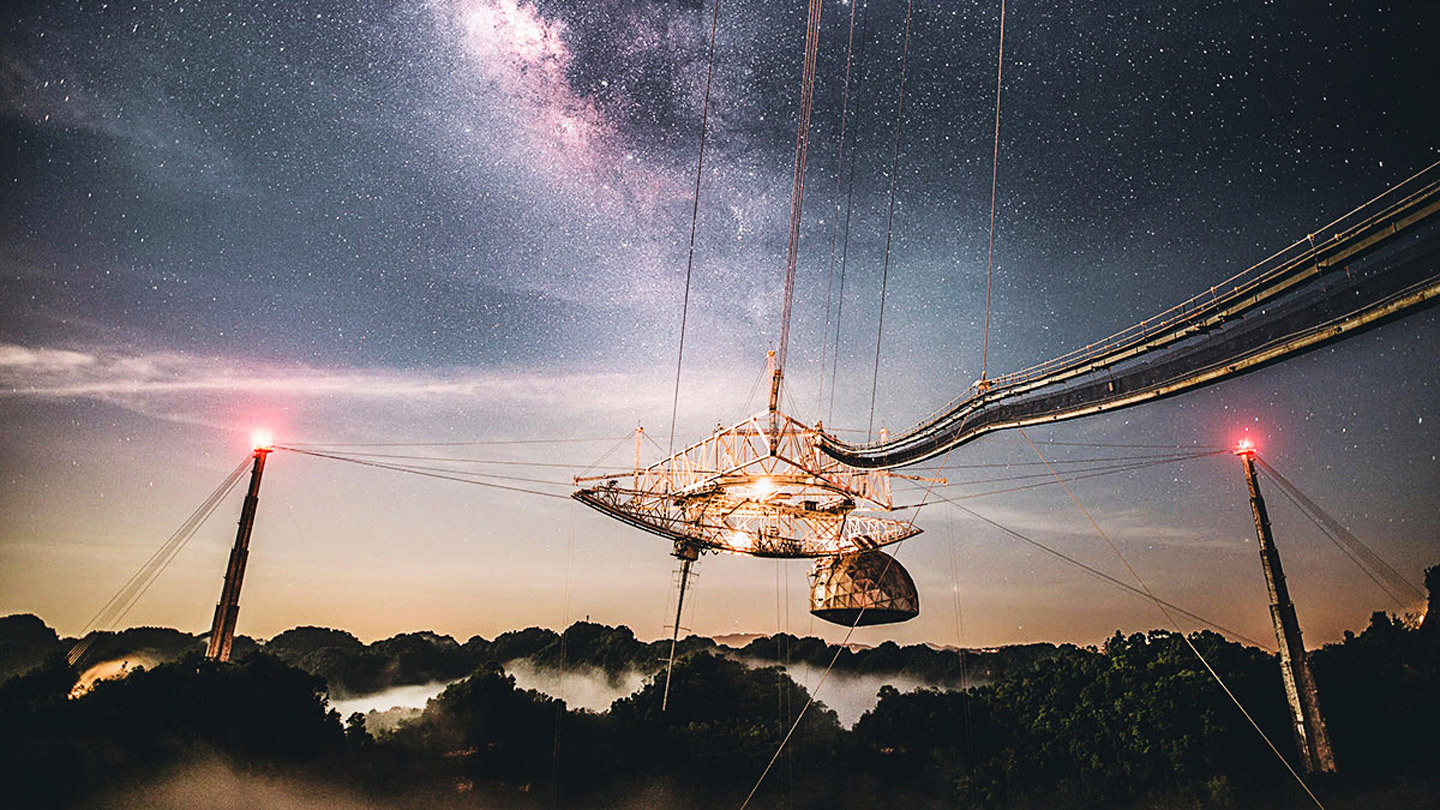 The sun has set on the iconic Arecibo telescope.

Since 1963, this behemoth radio telescope in Puerto Rico has observed everything from space rocks whizzing past Earth to mysterious blasts of radio waves from distant galaxies. But on December 1, the 900-metric-ton platform of scientific instruments above the dish came crashing down, demolishing the telescope and spelling the end of Arecibo’s observing days.

Arecibo has made too many discoveries to include in a Top 10 list, so some of its greatest hits didn’t make the cut — like a strange class of stars that appear to turn on and off (SN: 1/6/17), and ingredients for life in a distant galaxy. But in honor of Arecibo’s 57-year tenure as one of the world’s premier observatories, here are 10 of the telescope’s coolest accomplishments, presented in roughly reverse order of coolness.

Astronomers originally thought that apparently blinking stars called pulsars, discovered in 1967, might be pulsating white dwarf stars (SN: 4/27/68). But in 1968, Arecibo saw the pulsar at the center of the Crab Nebula flashing every 33 milliseconds — faster than white dwarfs can pulsate. (SN: 12/7/68). That discovery strengthened the idea that pulsars are actually rapidly spinning neutron stars, stellar corpses that sweep beams of radio waves around in space like celestial lighthouses (SN: 1/3/20).

In 1982, Arecibo clocked a pulsar, dubbed PSR 1937+21, flashing every 1.6 milliseconds, unseating the Crab Nebula neutron star as the fastest known pulsar (SN: 12/4/82). That find was puzzling at first because PSR 1937+21 is older than the Crab Nebula pulsar, and pulsars were thought to rotate more slowly with age.

Then, astronomers realized that old pulsars can “spin-up” by siphoning mass from a companion star, and flash every one to 10 milliseconds. The NANOGrav project now uses such rapid-fire radio beacons as extremely precise cosmic clocks to search for the ripples in spacetime known as gravitational waves (SN: 2/11/16).

Mercury seems like it would be an unlikely place to find water ice because the planet is so close to the sun. But Arecibo observations in the early 1990s hinted that ice lurked in permanently shadowed craters at Mercury’s poles (SN: 11/9/91). NASA’s MESSENGER spacecraft later confirmed those observations (SN: 11/30/12). Finding ice on Mercury raised the question of whether ice might exist in shadowed craters on the moon, too — and recent spacecraft observations indicate that it does (SN: 5/9/16).

Venus is shrouded in a thick layer of clouds, but Arecibo’s radar beams could cut through that haze and bounce off of the rocky planet’s surface, allowing researchers to map the terrain. In the 1970s, Arecibo’s radar vision got the first large-scale views of Venus’ surface (SN: 11/3/79). Its radar images revealed evidence of past tectonic and volcanic activity on the planet, such as ridges and valleys (SN: 4/22/89) and ancient lava flows (SN: 9/18/76).

In 1965, Arecibo radar measurements revealed that Mercury spins on its axis once every 59 days, rather than every 88 days (SN: 5/1/65). That observation cleared up a long-standing mystery about the planet’s temperature. If Mercury had turned on its axis once every 88 days, as previously thought, then the same side of the planet would always face the sun. That’s because it also takes 88 days for the planet to complete one orbit around the sun.

As a result, that side would be much hotter than the planet’s dark side. The 59-day rotation better matched the observation that Mercury’s temperature is fairly even across its surface.

Other odd finds have included a space rock whose shadows made it look to Arecibo like a skull, and an asteroid with the improbable shape of a dog bone (SN: 7/24/01). Understanding the characteristics and motion of near-Earth asteroids helps determine which ones might pose a danger to Earth — and how they could be safely deflected.

The Arecibo Observatory broadcast the first radio message intended for an alien audience in November 1974 (SN: 11/23/74). That famous message was the most powerful signal ever sent from Earth, meant in part to demonstrate the capabilities of the observatory’s new high-power radio transmitter.

The message, beamed toward a cluster of about 300,000 stars roughly 25,000 light-years away, consisted of 1,679 bits of information. That string of binary code detailed the chemical formulas for components of DNA, a stick figure sketch of a human, a schematic of the solar system and other scientific data.

Fast radio bursts, or FRBs, are brief, brilliant blasts of radio waves with unknown origins. The first FRB known to give off multiple bursts was FRB 121102, which Arecibo first spotted in 2012 and again in 2015 (SN: 3/2/16). Finding a repeating FRB ruled out the possibility that these bursts were generated by one-off cataclysmic events, such as stellar collisions. And because FRB 121102 kept recurring, astronomers were able to trace it back to its home: a dwarf galaxy about 2.5 billion light-years away (SN: 1/4/17). This confirmed the decade-long suspicion that FRBs come from beyond the Milky Way.

Gravitational waves were first directly detected in 2015 (SN: 2/11/16), but astronomers saw the first indirect evidence of ripples in spacetime decades ago. That evidence came from the first pulsar found orbiting another star, PSR 1913+16, first sighted by Arecibo in 1974 (SN: 10/19/74).

By tracking the arrival time of radio bursts from that pulsar over several years, astronomers were able to map its orbit, and found that PSR 1913+16 was spiraling toward its companion. As the orbits of the two stars contract, the binary system loses energy at the rate that would be expected if they were whipping up gravitational waves (SN: 2/24/79). This indirect observation of gravitational waves won the 1993 Nobel Prize in physics (SN: 10/23/93).

The first planets discovered around another star were three small, rocky worlds orbiting the pulsar PSR B1257+12 (SN: 1/11/92). The find was somewhat serendipitous. In 1990, Arecibo was being repaired, and so it was stuck staring at one spot on the sky. During its observations, Earth’s rotation swept PSR B1257+12 across the telescope’s field of view. Small fluctuations in the arrival time of radio bursts from the pulsar indicated that the star was wobbling as a result of the gravitational tug of unseen planets (SN: 3/5/94).

Thousands of exoplanets have since been discovered orbiting other stars, including sunlike stars (SN: 10/8/19). Recent exoplanet surveys, however, suggest that pulsar-orbiting planets are rare (SN: 9/3/15).