Here’s all the buzz about honeybees 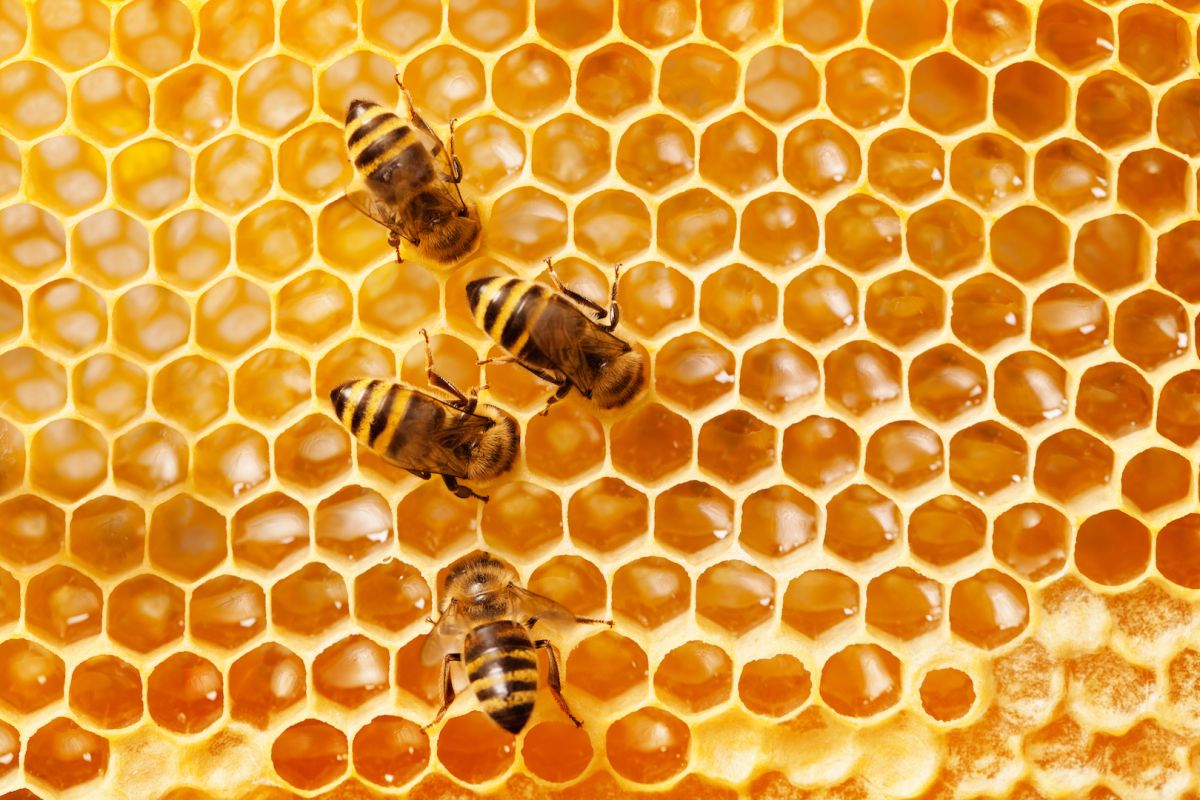 The domestic honeybee (Apis mellifera), also frequently spelled “honey bee” and known scientifically as the European or western honeybee, is the most common of the nine species of honey-producing bees. It is native to Africa, Europe and the Middle East, according to the University of Arkansas Division of Agriculture, but humans have introduced domestic honeybees around the world and it’s the only honeybee in the United States.

Honeybees are social insects. They live in large colonies that include a single adult queen bee and tens of thousands of female worker bees, whose numbers change with the seasons, according to the U.S. Food and Drug Administration. The queen bee is the only bee that lays eggs. Male honeybees, called drones, are only seen during the spring mating season and hatch from unfertilized eggs. The female worker bees, on the other hand, hatch from eggs that have been fertilized by drones.

Related: Honeybees know a lot about nothing

Beekeeping, or apiculture, is the human management of honey bee colonies. The practice dates back to almost 9,000 years ago, according to a 2015 paper published in the journal Nature. Modern beekeepers use human-made bee hives that are typically boxes with rows of wooden frames that bees fill with wax honeycomb. The hives are designed to give beekeepers access to collect honey and help maintain the nest.

Why honeybees are important

Honeybees produce several products that are useful to people, notably honey and beeswax. There is a saying among beekeepers: “With a bee, you can use everything but the buzz,” said Sue Garing, a commercial beekeeper who owns and operates a honey business in Kirkwood, New York.

Honeybees also provide a valuable service by pollinating flowers as they forage, thus helping wildflowers reproduce and helping farms yield more and better produce. Many common agricultural crops require pollination in order to bear fruit or improve the quality of the fruit. “If you have beehives [nearby], you have better fruit,” Garing told Live Science; she first acquired honeybees to help her fruit trees in upstate New York.

Honeybees have become an important supplement to native bee pollinators for many crops, and essential to production of some, such as almonds and avocados, according to the National Honey Board. Today, many of the largest commercial beekeepers move hives around the country to pollinate crops — a service that’s many beekeepers’ major source of income, Garing said.

Experts stress that while honeybees are economically and ecologically important, there are around 20,000 other species of bees worldwide that also pollinate plants. “Some of those bees visit flowers that can only be visited by them,” said Margaret Couvillon, a pollinator biologist at Virginia Tech in Blacksburg, Virginia. “If you take that bee away, that flower will also disappear.”

For example, in a 2014 study published in the journal Scientific Reports, researchers describe how a species of solitary ground-nesting bee native to Japan has coevolved with a trumpet-shaped flower. The bee’s unusually long tongue has made it the most important pollinator species for that particular flower.

Some worker bees specialize as foragers, and they travel relatively far distances (around 4 miles, or 6.5 kilometers) for their tiny body size in search of good food sources, wrote pollinator specialist Joe Traynor, in his article on the beekeeping forum Beesource.

Once a honeybee finds a patch of flowers or fruit orchard, the bee returns to the colony to recruit other workers to visit the site by performing a “waggle dance.” The bee’s waggle dance is “a symbolic language giving a distance and direction,” Couvillon said. The dance provides all the information the other bees need to find the location.

Related: These honeybees have mastered twerking: How they do it

Honeybees gather nectar in their mouths, which collects in a honey crop, an internal organ also known as a honey stomach. Pollen accumulates on the bee’s hind legs in the pollen basket, an indented area surrounded by hair.

Back at the hive, workers regurgitate the nectar and pass it among themselves in a chain of regurgitated nectar-honey, until enzymes in their stomach have broken down the nectar into simple sugars. The nectar then gets dehydrated to contain only 18 to 20% water, a process aided by the rapid wing flapping of the honeybees, according to an article in The Conversation. Once the nectar has turned into honey and sufficiently dehydrated, the bees seal it in honeycomb chambers with a thin layer of beeswax, which the bees produce themselves. The honey can remain edible for hundreds of years because of its low moisture content and natural antibacterial properties, Smithsonian Magazine reported.

When nectar is in short supply, some honeybees steal food from other hives rather than waste energy foraging. Honeybees may be particularly defensive at these times, called a robbing season, said Elina Niño, a beekeeping researcher at the University of California, Davis.

Honey is the main foodstuff of worker bees, and colonies rely on stockpiles to survive the winter, when foraging opportunities are slim. The other classes of bees have specialized diets. For example, worker and drone larvae eat more pollen, which has a higher protein content to help their physical development, Niño said.

The practice of beekeeping

When a worker bee feels threatened, it may stick its venomous, barbed stinger into the threat. This action is a last resort for the worker, as the stinger is then ripped out of the bee, killing the bee in the process. To get around the bee’s painful defense mechanism, beekeepers may send puffs of smoke into the hive and surrounding area, which interferes with the bees’ ability to detect each other’s alarm pheromones and stops them from stinging.

Related: Africa’s largest mammal is terrified of this tiny insect

Honeybee behavior varies among colonies, Niño said. Some honeybee colonies are rarely defensive while others may be poised to attack at any time. For example, Africanized honey bees, a hybrid strain of honeybees from Africa and Europe, are considered especially defensive. “Africanized honey bees will respond faster, in greater numbers, and follow intruders for longer distances than European honey bees,” she said.

Populations of Africanized bees have spread northward through the Americas, from Brazil, after African honeybees were introduced there in the 1950s, according to the Smithsonian Institute. Garing said that if one of her 50 hives is particularly “hot” (or overly aggressive), she will kill the queen and replace it with a new one for the colony to support, in an effort to help the hive become more mellow. Queens are often allowed to mate with any wild drones in the area, Garing explained, because of the difficulty and expense of selective breeding or artificial insemination.

People consume and use many products directly produced by honeybees, such as honey and beeswax. The high sugar content of honey makes it a desirable sweet treat for many people, and the flavor is unique to the combination of flowers the bees collect their nectar from. Beeswax is made from the bees’ glandular secretions that build the hexagonal cells that serve as brooding and storage chambers in the hive. The product also has multiple human uses and is included in items such as candles, skincare products and soap.

There are many supposed medicinal uses of honey and other bee products, such as propolis (a sort of sealant that bees use to shore up holes in their nest and line the entrance to the hive) and royal jelly (another type of glandular secretion produced by nursery workers, or bees responsible for taking care of baby bees). Garing also receives requests for bee brood, or bee eggs, larva and pupae, all of which are edible.

These products are often touted as new-age or traditional medicine, and are said to provide poorly-defined general health benefits. But despite the long history of beekeeping, which predates Western medical science, the extent of many of these benefits and the possible explanations are not well-understood, as summarized in a 2017 review published in the journal Oxidative Medicine and Cellular Longevity.

The main threats to the health of a honeybee hive are sometimes grouped into what scientists call “the four Ps”: pesticides, pests, pathogens and poor nutrition.

Some of the biggest problems facing honeybees in the U.S. include varroa mites, which are blood-sucking parasites that transmit disease; American foulbrood, a bacterial infection that kills bee larvae; climate change; and urbanization. These pressures have made beekeeping more difficult and more expensive, and have contributed to a major decline in the number of managed beehives in the United States — from more than 5 million in the 1950s to about 2.5 million in recent years, according to a 2010 article in the journal Apidologie.

Related: Honeybee collapse may have complex cause (Op-Ed)

While there are challenges to both commercial operations and backyard beekeepers, honeybees are not in danger of extinction, experts told Live Science. Instead, thousands of native bee species, which are also important pollinators for many wild and domestic plants but are often solitary, and therefore poor candidates for commercial rearing, are in more dire need of resources and protection.

Different species of bees have different roles as pollinators, whether it is specialized pollination that supports biodiversity, or large scale agricultural crop pollination that feeds the world, Couvillon said. For that reason, she said, “we need both [native bees and honeybees] present in the landscape.”