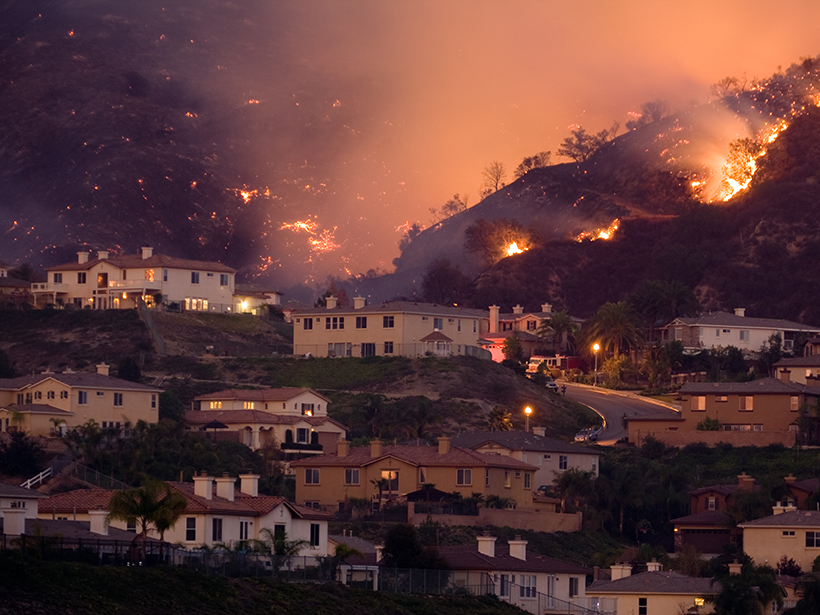 Natural hazards routinely strike many parts of the United States—the West Coast has its earthquakes and the Midwest has its tornadoes, for instance. Researchers have now compared data sets of natural hazards and land use to show that more than half of the built structures in America—homes, commercial buildings, and more—are located in natural hazard hot spots. Decades of development, including densification of existing cities and expansion into new areas, have put a significant fraction of U.S. residents in harm’s way, the scientists proposed.

Virginia Iglesias, a geoscientist at the University of Colorado Boulder, and her colleagues started by assembling hazard maps of the continental United States for five major types of natural disasters: earthquakes, wildfires, floods, hurricanes, and tornadoes. The team relied largely on data sets from the U.S. Geological Survey (USGS) and NOAA but also mined data from the private sector. The researchers regridded each map to a pixel scale of 250 × 250 meters, roughly the size of a few city blocks.

To identify hazard hot spots, the team zoomed in on areas where the probability or intensity of the hazard was in the top 10% of values. “We tried to get at where the real risk is,” said William Travis, a geographer at the University of Colorado Boulder and a coauthor of the study. Not surprisingly, several trends emerged: Earthquake-prone regions were clustered in the western United States, the Midwest was tornado country, and the Eastern Seaboard and the coastline of the Gulf of Mexico were most susceptible to hurricanes. Furthermore, wildfire risk was highest in western states, and flooding was most likely along large rivers.

The researchers next mined the Historical Settlement Data Compilation for the United States, a housing and property database compiled from Zillow data. They extracted maps of built structures in the continental United States from 1945 to 2015 in 5-year intervals. Between 1 million and 2 million structures were built every year during that time period, the team found.

By overplotting the natural hazard maps on each epoch of the land use data, Iglesias and her colleagues traced how many buildings had been built in natural hazard hot spots and how those trends evolved over time.

“Where we put things is clearly part of the problem.”

They found that 57% of structures standing in 2015 were located in hazard hot spots. That’s significantly more than would be expected by random chance, the researchers noted, because hot spots constitute only about 31% of the surface area of the continental United States. “Where we put things is clearly part of the problem,” said Travis.

There are several explanations for the relative overdensity of structures in hazard hot spots, Iglesias and her colleagues proposed. One is that areas prone to natural disasters also happen to possess desirable characteristics. For instance, coastal regions have long been revered not only for their beauty but also for their ability to sustain an economy via, for example, a port. That’s certainly the case for the West Coast of the United States, said Travis, but growth in this region also brings more people into an earthquake zone. Similarly, migration to Sun Belt states—known for their warmer climates—puts people at increased risk of hurricanes and tornadoes, he said.

“People continue to move into areas that are known to be hazardous.”

These results aren’t surprising, said John Mutter, an Earth scientist at Columbia University in New York City not involved in the research. “People continue to move into areas that are known to be hazardous. They can be told they’re hazardous, and they’ll still move. Somehow they think [the hazard] won’t get them.”

To better understand development patterns in hot spot regions, Iglesias and her collaborators focused on two different aspects of urbanization: densification (adding structures in already built-up areas) and expansion (adding structures to formerly undeveloped land). They found that both processes contributed to an increased risk of exposure for all five types of natural disasters they examined. However, densification dominated in earthquake and hurricane hot spots, and expansion dominated in wildfire and tornado hot spots (both expansion and densification dominated at different times for flood hot spots).

These results, which are in review for publication in Earth’s Future, will be presented at AGU’s Fall Meeting 2020.

Some natural disasters like wildfires and flooding are apt to increase in both intensity and frequency with climate change. As a result, the risks of building structures in these hazard hot spots are expected to magnify in the future, the researchers proposed. The location and spatial extent of the hot spots are also likely to change, said Iglesias.

But there’s still hope, she said. “We can build smart in the future. We can take risk into account when deciding where to build and how to build.”