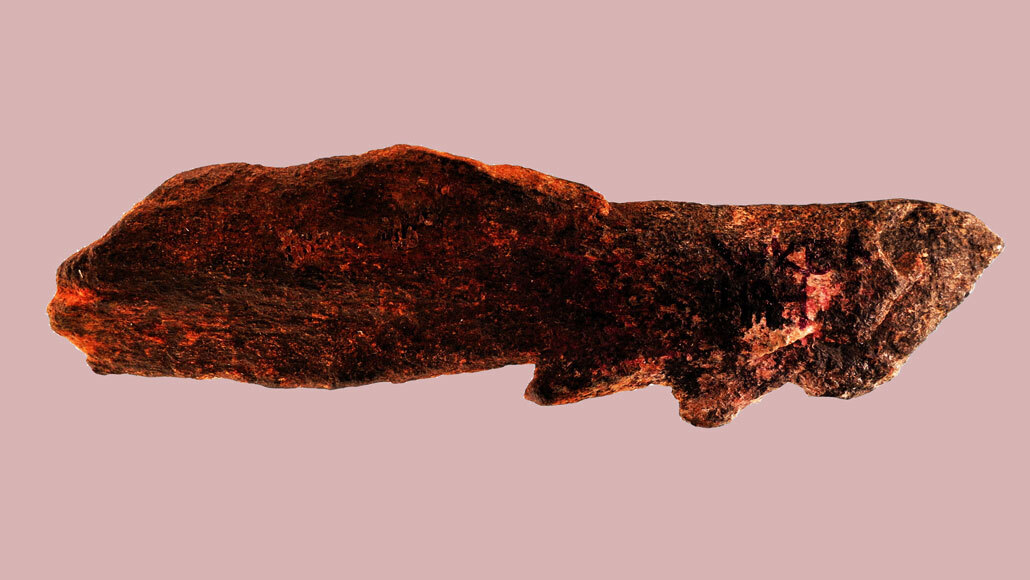 A type of bone tool generally thought to have been invented by Stone Age humans got its start among hominids that lived hundreds of thousands of years before Homo sapiens evolved, a new study concludes.

A set of 52 previously excavated but little-studied animal bones from East Africa’s Olduvai Gorge includes the world’s oldest known barbed bone point, an implement probably crafted by now-extinct Homo erectus at least 800,000 years ago, researchers say. Made from a piece of a large animal’s rib, the artifact features three curved barbs and a carved tip, the team reports in the November Journal of Human Evolution.

Among the Olduvai bones, biological anthropologist Michael Pante of Colorado State University in Fort Collins and colleagues identified five other tools from more than 800,000 years ago as probable choppers, hammering tools or hammering platforms.

The previous oldest barbed bone points were from a central African site and dated to around 90,000 years ago (SN: 4/29/95), and were assumed to reflect a toolmaking ingenuity exclusive to Homo sapiens. Those implements include carved rings around the base of the tools where wooden shafts were presumably attached. Barbed bone points found at H. sapiens sites were likely used to catch fish and perhaps to hunt large land prey.

The Olduvai Gorge barbed bone point, which had not been completed, shows no signs of having been attached to a handle or shaft. Ways in which H. erectus used the implement are unclear, Pante and his colleagues say.

This find and four of the other bone implements date to at least 800,000 years ago, based on their original positions below Olduvai sediment that records a known reversal of Earth’s magnetic field about 781,000 years ago. Another bone artifact dates to roughly 1.7 million years ago, the researchers say.

“The Olduvai point implicates H. erectus as the inventor of barbed bone point technology,” Pante says, because stone tools previously excavated in the same Olduvai Gorge sediment resemble those that have been found at other African sites with H. erectus fossils.

The bone tools described in the new study come from a collection of animal bones excavated in the late 1960s and early 1970s by Mary Leakey before being stored among thousands of fossils and artifacts at an on-site Olduvai facility. Pante discovered the set of 52 bones in 2007 while doing research at Olduvai Gorge.

Still, archaeologist Christian Tryon of the University of Connecticut in Storrs, who did not participate in the new study, questions whether the Olduvai bone specimen can be definitively classed as a barbed bone point because it wasn’t finished. But Plante’s report shows that Olduvai hominids, whether they were H. erectus or some other prehuman population, carefully selected bones as well as stones for toolmaking, Tryon says. “They were expert craftsmen or women.”

New York University archaeologist Justin Pargeter agrees. Although it’s unclear whether the Olduvai artifact was a pointed bone tool comparable to those later made by H. sapiens, he says, the existence of any bone toolmaking 800,000 years ago shows that this practice is far older than typically assumed.

Along with bone toolmaking, a series of critical behavioral advances in hominids occurred before the emergence of H. sapiens around 300,000 years ago. These developments include the invention of stone tools (SN: 6/3/19), controlled fire use (SN: 4/2/12) and the ability to survive in new environments (SN: 11/29/18). Exploiting bone to make tools such as barbed points would have aided ancient Homo groups migrating through unfamiliar regions where locations of stone sources were unknown, Pante suspects.