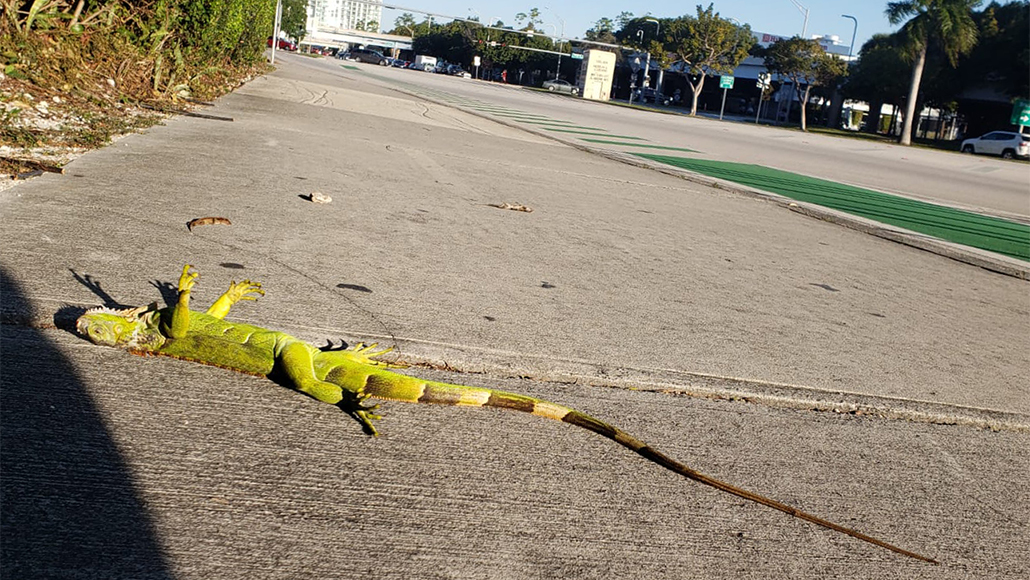 After the coldest night in south Florida in a decade, lizards were dropping out of palm trees, landing legs up. The scientists who raced to investigate the fallen reptiles have now found that, despite such graceless falls, some of these tropical, cold-blooded creatures are actually more resilient to cold than previously thought.

The finding sheds light on how some species might respond to extreme weather events caused by human-caused climate change (SN: 12/10/19). Although climate change is expected to include gradual warming globally, scientists think that extreme events such as heat waves, cold snaps, droughts and torrential downpours could also grow in number and strength over time.

The idea for the new study was born after evolutionary ecologist James Stroud received a photo of a roughly 60-centimeter-long iguana prone on its back on a sidewalk from a friend in Key Biscayne, an island town south of Miami. The previous night, temperatures dropped to just under 4.4° Celsius (40° Fahrenheit).

“When air temperatures drop below a critical limit, lizards lose the ability to move,” says Stroud, of Washington University in St. Louis. Lizards that sleep in trees “may lose their grip.” Stunned lizards on the ground are likely easy prey for predators, he notes.

Realizing that the cold snap could be used to study how future instances of extreme weather might affect such animals in the wild, Stroud and colleagues rushed to collect live specimens of as many different kinds of lizards as they could in the Miami area (SN: 8/27/20). The researchers then tested how well the six reptile species they captured tolerated cold by sticking thermometers on the animals, placing them in a large cooler of ice and observing how cold they got before becoming too stunned to right themselves after getting flipped on their backs.

Stroud and colleagues had previously run similar tests on these lizard species as part of research on invasive species. That work in 2016 suggested that the reptiles might not easily withstand cold snaps like the recent one — cold tolerances ranged from as low as about 7.7° C for the Puerto Rican crested anole (Anolis cristatellus) to roughly 11.1° C for the brown basilisk (Basiliscus vittatus).

The new study, however, revealed that the reptiles now could withstand temperatures roughly 1 to 4 degrees C colder. Oddly, the lizards, on average, could all endure cold down to the same lowest temperature, about 5.5° C, the researchers report in the October Biology Letters. Given the great variation in size, ecology and physiology between these species, “this was a really unexpected result,” and one that the researchers don’t have an explanation for, Stroud says.

Natural selection may be behind the change, meaning that abnormally cold temperatures are killing off those individuals that could not survive and leaving behind those that happen to be better able to tolerate cold. Alternatively, the reptiles’ bodies could have changed in some way to acclimate to the colder temperatures. Stroud hopes in the future to measure the cold tolerance of lizards immediately before a forecasted cold snap and then examine the same reptiles immediately afterward to look for signs of acclimation.

Scientists have long thought that tropical species, which have typically evolved in thermally stable environments, might prove especially vulnerable to major shifts in temperature (SN: 5/20/15). This new study reveals a way in which species can either rapidly evolve or acclimate, which “may provide ecosystems with some resilience to extreme climate events,” says Alex Pigot, an ecologist at University College London who did not take part in the research.

One remaining question “is whether this resilience also applies to extreme heating events,” Pigot adds. “Previous evidence has suggested that species’ upper thermal limits may be less flexible than their lower thermal limits.”