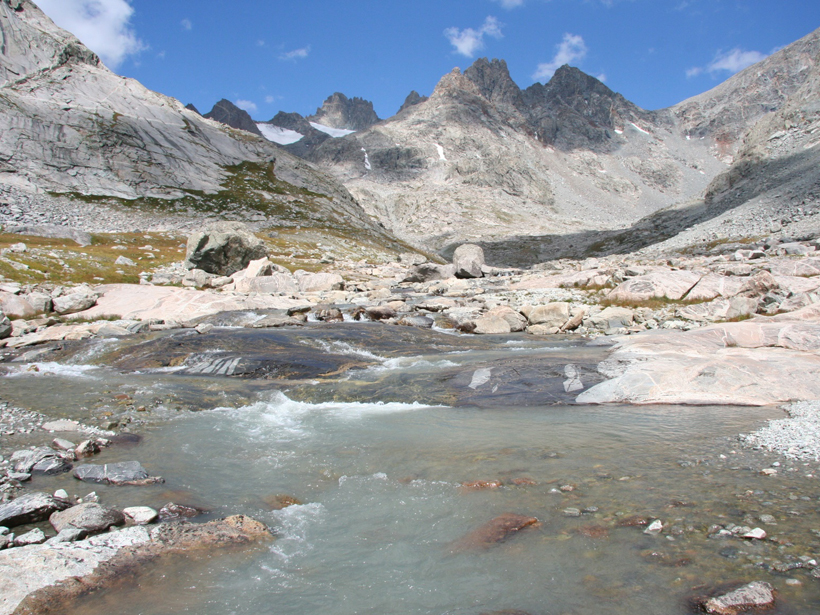 Over the past 50 years human alteration of Earth’s climate has accelerated rapidly, which will inevitably affect physical landscape processes in societally challenging ways. But landscape responses to modern climate change have not been synthesized previously over any large regional scale. A recent article in Reviews of Geophysics explores anticipated landscape consequences of modern climate change and investigates what changes are evident already in the western United States. Here, the authors give an overview of what the currently available data show and discuss the challenges of identifying climatic signals in today’s landscapes over multidecadal time scales.

How does climate change affect the physical landscape?

From the starting point of global warming, a suite of hydroclimatic changes follow: reduced glacial ice and snow cover, precipitation shifting from snow to rain, more extreme rainstorms but also increased drought risk, and increased risk of wildfire (as vegetation becomes more flammable as the climate grows warmer and drier).

In mid-latitude continental settings, these are anticipated to cause increased erosion, larger and more frequent floods in rivers, but also drying of soils as evapotranspiration rates increase. Therefore, we would expect to see more landslides, watersheds producing more sediment, river channels that are made more dynamic by increases in sediment and high flows, and more wind-blown sediment transport in deserts activating sand dunes and dust storms.

On what time scales are these changes seen?

Landscape response to climatic change lasts thousands to millions of years, so most of the modern climate-change signal would not be apparent in physical landscape processes yet.

Human alteration of global climate has accelerated greatly over the past 50 years—a very short time frame over which to try to detect effects on landscapes.

Landscape response to climatic change lasts thousands to millions of years, so most of the modern climate-change signal would not be apparent in physical landscape processes yet (or at least it’s difficult to distinguish from background ‘noise’ and influence of other factors such as human land use).

However, previous studies have documented physical landscape effects of recent climate change in some regions, such as deglaciation, or rockfalls having increased as high-altitude permafrost thaws.

This motivated us to attempt a synthesis of these changes over a large regional scale. We chose the western United States because it has steep terrain with high sediment yield that is likely to be especially sensitive to climate. This region also offers abundant data to review. We felt it’s important to learn as much as possible about the consequences of modern climate change even though the picture will be incomplete, given the short time scale.

Why is it important to understand these particular impacts of climate change?

It could have major implications for human health and safety, economic stability, water security, natural-resource management, and ecosystem resilience.

If climate change is affecting landscape processes over the multidecadal time scales of human lives and infrastructure design, that could have major implications for human health and safety, economic stability, water security, natural-resource management, and ecosystem resilience. For example: increased landslide risk or more-dynamic river channels could pose significant hazards to lives and property in many regions; greater watershed sediment yields could decrease water quality and water-storage capacity in reservoirs; and desert dust storms cause respiratory illnesses and traffic accidents.

What are some examples of climate-driven landscape changes seen in the western United States over recent decades?

Increases in sand-dune activity and airborne dust have also been linked to recent climatic changes by multiple studies, although separating climatic and land-use effects is difficult.

We found that changes in sediment yields and fluvial morphology have been linked more commonly to non-climatic drivers thus far, at least as far as the available data indicate.

What are the challenges to measuring, monitoring, and predicting landscape responses to climate change?

Studying this problem has many challenges. It is difficult to disentangle climatic effects from tectonic or human land-use effects, especially over the short time scales of recent climate change. The best places to look for climate-change signals are natural landscapes with little or no direct human influence, but most of the available geomorphic and sedimentary data come from anthropogenically altered places. It is also rare to find robust time series, with consistent data-collection methods, spanning decades before and during modern climate change.

We need to better understand the range of landscape response that can occur for a certain size forcing event. For example, two floods of the same size can produce different geomorphic responses on the same river, for reasons still not well understood. We must learn more about lag times in sedimentary systems in order to manage climate-driven landscape change: if a glacier disappears or a large landslide occurs high in a remote watershed, what response should we expect far downstream, and over what time scale? It will also be important to model scenarios of compound disturbances, to forecast landscape change from increases in both wildfire and extreme storms, for instance. There is certainly also a need for much more place-based landscape-evolution data, including the reporting of null results—where studies designed to detect climate-change effects if present find that none were observed. We also encourage others to expand our review and synthesis to other regions around the globe.