How Scientists Can Engage to Solve the Climate Crisis 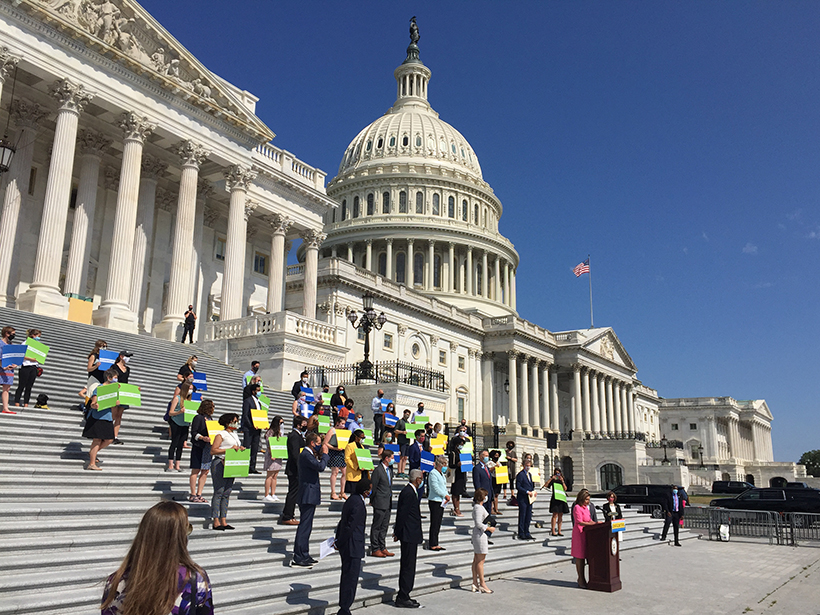 Despite being surrounded by clear signs of the climate crisis, President Trump that day dismissively remarked to California officials, “I don’t think science knows, actually.”

On 14 September 2020, the U.S. Gulf Coast, still reeling from the aftermath of category 4 Hurricane Laura, was bracing for the landfall of Hurricane Sally. At the same time, active fires burned across more than 5 million acres in the United States, choking the air in the U.S. West with hazardous smoke. To scientists, it is clear that climate change is worsening these hazards by, for example, intensifying hurricane rainfall and creating hotter and dryer conditions that accelerate fire spread [Emanuel, 2017; Littell et al., 2016]. Yet despite being surrounded by clear signs of the climate crisis, President Trump that day dismissively remarked to California officials, “I don’t think science knows, actually.”

The gap between scientific consensus and political action on the unfolding climate crisis can be frustrating. For decades, geoscientists have been warning about the dangers of unmitigated climate change. Synthesis documents, such as the Intergovernmental Panel on Climate Change’s (IPCC) 2018 Global Warming of 1.5°C report, express the consensus scientific view that immediate and dramatic reductions in carbon emissions are needed to avert climate catastrophe. But translating this alarm into tangible policy action can feel daunting when some political leaders continue to deny the science of climate change. To counter this pessimism, I offer here a motivating example of science-driven work by the U.S. Congress to solve the climate crisis, and I describe ways in which scientists can be partners in advancing climate action.

The Select Committee on the Climate Crisis

Throughout its existence, Select Committee members and staff have consulted with a wide range of stakeholders, including community and business leaders, policy experts, activists, and scientists. The committee has held 19 hearings and 6 roundtables, reviewed hundreds of responses to a request for information (RFI), and engaged in over a thousand stakeholder meetings and calls.

Science and scientists played an important role throughout this process. For example, an April 2019 hearing on “Solving the Climate Crisis: Drawing Down Carbon and Building Up the American Economy” featured a scientist lead author on the Global Warming of 1.5°C report, and scientists served as witnesses for other Select Committee hearings as well. RFI responses included a joint statement from scientific societies on needs for climate change research and assessment. Committee staff also engaged directly in meetings and calls with scientists and scientific groups, both for their specific subject matter expertise and for their insight into approaches for developing science-informed climate policy.

An Action Plan for Solving the Climate Crisis

Using the input it received from stakeholders, in June 2020 the majority staff of the Select Committee issued a comprehensive climate report, Solving the Climate Crisis: The Congressional Action Plan for a Clean Energy Economy and a Healthy, Resilient, and Just America. Across more than 500 pages, the report provides legislative recommendations addressing many aspects of climate policy, including infrastructure, clean energy, environmental justice, public health, natural resources, and resilience. Though focused on the U.S. federal role, the report also acknowledges the importance of partnerships with local, state, and international efforts.

It is beyond the scope of this article to describe the full breadth of Select Committee report recommendations, so I will focus here on two primary areas of climate science recommendations: (1) the need for strong and sustained federal investment in foundational climate research and education and (2) the need to organize and ramp up federal efforts, in coordination with nonfederal partners, to develop and deploy actionable climate risk information to guide planning decisions in response to the mounting impacts of climate change.

On foundational climate science, Select Committee recommendations to Congress include the following:

These and other recommendations in the report provide a high-level road map for needed policies to address climate change. In many cases, members of Congress have already introduced bills that would advance Select Committee report recommendations. Legislative packages recently passed by the House of Representatives, such as the Moving Forward Act and the Clean Economy Jobs and Innovation Act, also advance these ideas. However, many Select Committee policy ideas have not yet been translated into legislation. Engagement with outside stakeholders, including scientists, will play a key role for guiding how Select Committee policy recommendations become reality.

Ultimately, solving the climate crisis will require an all-hands-on-deck approach that includes government, academia, business, activists, scientists, and community groups working together on local to international solutions. Regardless of your career stage and scientific specialization, there are many ways to engage, large and small, that can harness your passions and expertise to advance climate action. Though the climate policy process can often seem frustratingly messy and divisive, there’s no alternative but to dive in, engage as you are able, and learn iteratively from the experience.

The views expressed here do not necessarily represent those of AGI or AAAS.

Text not subject to copyright.