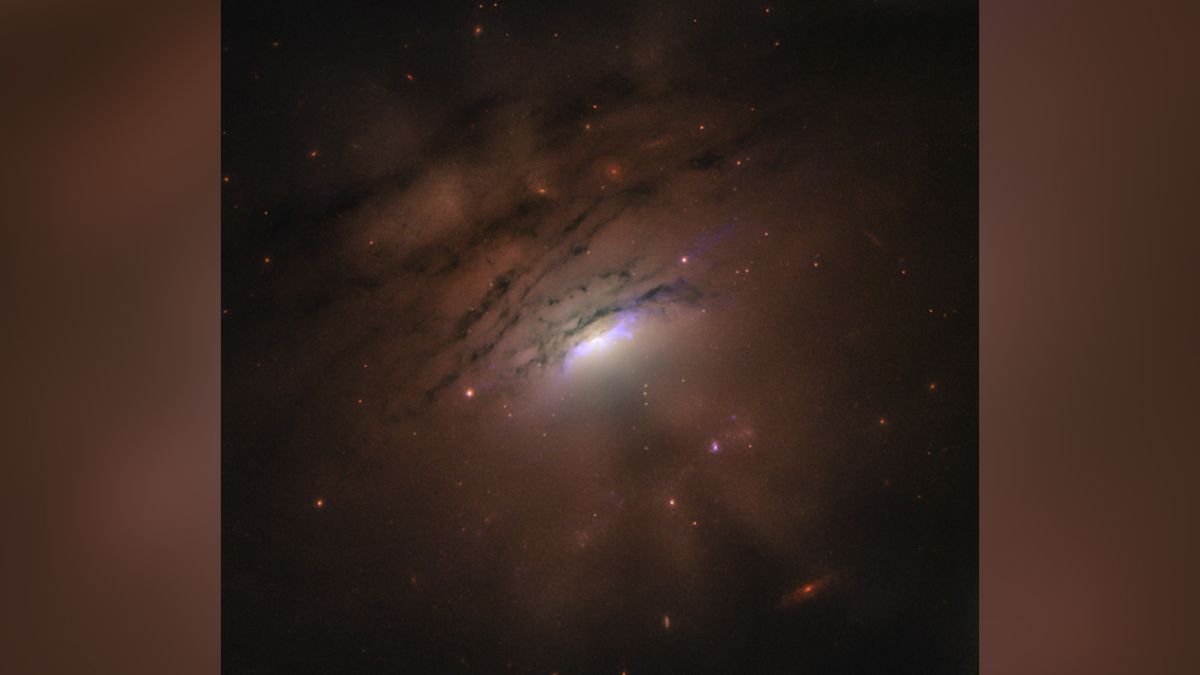 In images from the Hubble Space Telescope, scientists have spotted an entirely new phenomenon. Reaching tens of thousands of light-years into the void of space, vast shadows stretch from the centre of the galaxy IC 5063, as though something is blocking the bright light from therein.

You’ve probably seen something very like it before – bright beams from the Sun when it’s just below the horizon and clouds or mountains only partially block its light, known as crepuscular rays. According to astronomers, the shadows from IC 5063 could be something very similar. They’re just a whole lot bigger – at least 36,000 light-years in each direction.

IC 5063, a galaxy 156 million light-years away, is a Seyfert galaxy. This means it has an active nucleus; the supermassive black hole at its centre is busily guzzling down material from a dense accretion disc and torus of dust and gas around it.

Although the supermassive black hole itself gives off no light, the intense forces involved in this massive accretion process generate so much heat and light from the region around the black hole that the galactic nucleus absolutely blazes across space. It’s this light, astronomers think, that is being shadowed. The obstruction? Likely caused by dust.

“We think we’ve found evidence that there is probably dust all over the galaxy scattering light from the accreting black hole in the galaxy’s active nucleus, and that the light can illuminate almost the whole galaxy,” said astronomer Peter Maksym of the Harvard Smithsonian Center for Astrophysics.

“We know that this galaxy recently had a merger with another galaxy and that could kick up dust everywhere. It’s also possible that the black hole jets are kicking up dust from near the nucleus.”

The strange features were originally spotted in December 2019 by amateur space image processor Judy Schmidt. She was reprocessing raw data from new Hubble Space Telescope observations into images, obtained in 2018 and 2019.

In the original images, there was no sign of the cone-shaped features. But Schmidt spotted something awry straight away.

“I noticed the dark rays almost immediately after I’d opened the file in Photoshop and began working to enhance them to make sure what I thought I saw was there,” Schmidt explained.

“Even after I’d processed it, I kept blinking my eyes wondering if I was seeing what I thought I was seeing,” she added.

She posted her strange discovery to Twitter, and astronomers – including Maksym – were immediately intrigued. He and colleagues, who were already working on the jets produced by IC 5063’s supermassive black hole, got to work on studying the strange shadowy shapes.

They used near-infrared observations taken in March and November with the Hubble Space Telescope’s Wide Field Camera 3. At those wavelengths, the instrument can peer through the dust to get a better understanding of the galaxy’s centre.

Based on the team’s analysis, there could be gaps or clear lanes in the torus of dust and gas that shrouds the innermost core of IC 5063. If the black hole were tipped on its side with respect to the galactic plane, some light from the galactic nucleus would be blocked by the denser regions of the torus, but some would slip out through these gaps, creating colossal galactic crepuscular rays.

The gaps would have to be stable for at least 36,000 years for the rays to create more-or-less consistent straight lines. This places some constraints that may help astronomers better understand the dynamics at play in the centre of a galaxy 156 million light-years away.

If it is the torus responsible, that tells us the structure is quite thin and could be being warped by torque in the galactic centre.

“The discovery shows that the torus, or ring, could be very thin – light seems to get out almost everywhere. If the torus is big enough it becomes unstable, the gravity and rotation holding it together point one direction near the black hole and in a different direction as influences from the galaxy start to become important. This looks like a warp or a bend,” Maksym said.

“Scientifically, it’s showing us something that is hard – usually impossible – to see directly. We know this phenomenon should happen, but in this case, we can see the effects throughout the galaxy. Knowing more about the geometry of the torus will have implications for anybody trying to understand the behavior of supermassive black holes and their environments.”

Because this is the first time we have actually seen this, it may take some time to unravel what’s actually going on. There are other possibilities yet to be ruled out. A mysterious encounter could have created unusual X-shaped stellar orbits. The destruction of dust by hot outflows from the galactic nucleus has also not entirely been ruled out, although the team notes it seems unlikely, based on their modelling.

The next step will be to take more observations in other wavelengths with a range of instruments, and use those new data as a basis to perform detailed modelling.

“This is a project that is just begging for new data because it raises more questions than it answers,” Maksym said.

The research has been published in The Astrophysical Journal Letters.