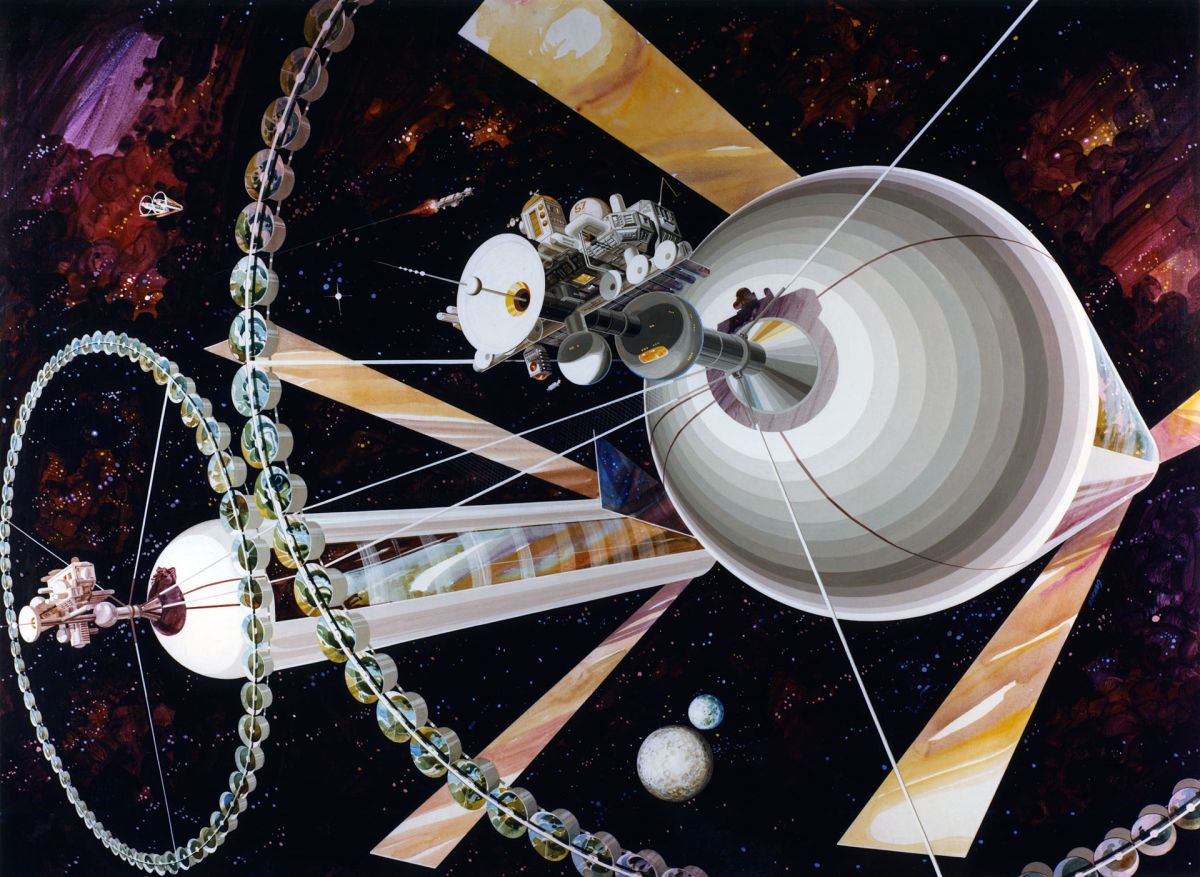 Now more than ever, space agencies and starry-eyed billionaires have their minds fixed on finding a new home for humanity beyond Earth’s orbit. Mars is an obvious candidate, given its relatively close proximity, 24-hour day/night cycle and CO2-rich atmosphere. However, there’s a school of spacefaring thought that suggests colonizing the surface of another planet — any planet — is more trouble than it’s worth.

Now, a new paper published Jan. 6 date to the preprint database arXiv offers a creative counter-proposal: Ditch the Red Planet, and build a gargantuan floating habitat around the dwarf planet Ceres, instead.

In the paper, which has not yet been peer-reviewed, astrophysicist Pekka Janhunen of the Finnish Meteorological Institute in Helsinki describes his vision of a “megasatellite” of thousands of cylindrical spacecrafts, all linked together inside a disk-shaped frame that permanently orbits Ceres — the largest object in the asteroid belt between Mars and Jupiter. Each of these cylindrical habitats could accommodate upwards of 50,000 people, support an artificial atmosphere and generate an Earth-like gravity through the centrifugal force of its own rotation, Janhunen wrote. (This general idea, first proposed in the 1970s, is known as an O’Neill cylinder).

Related: Populating a Mars base will be dangerously unsexy

But why Ceres? Its average distance from Earth is comparable to that of Mars, Janhunen wrote, making travel relatively easy — but the dwarf planet also has a big elemental advantage. Ceres is rich in nitrogen, which would be crucial in developing the orbiting settlement’s atmosphere, Janhunen said (Earth’s atmosphere is roughly 79% nitrogen.) Rather than building a colony on the surface of the tiny world — Ceres has a radius roughly 1/13th that of Earth — settlers could utilize space elevators to transfer raw materials from the planet directly up to their orbiting habitats.

This orbital lifestyle would also address one of the biggest caveats Janhunen sees in the idea of a Martian surface colony: the health impacts of low gravity.

“My concern is that children on a Mars settlement would not develop to healthy adults (in terms of muscles and bones) due to the too-low Martian gravity,” Janhunen told Live Science in an email. “Therefore, I searched for [an] alternative that would provide [Earth-like] gravity but also an interconnected world.”

Even so, Janhunen’s proposal comes with its own caveats that could work against a successful Ceres colony, an outside researcher pointed out.

According to Janhunen’s proposal, each cylinder of the Ceres megasatellite would produce its own gravity through rotation; each cylindrical habitat would measure about 6.2 miles (10 kilometers) long, have a radius of 0.6 miles (1 km) and complete a full rotation every 66 seconds to generate the centrifugal force needed to simulate Earth-like gravity.

A single cylinder could comfortably hold about 57,000 people, Janhunen said, and would be held in place next to its neighboring cylinders through powerful magnets, like those used in magnetic levitation.

That interconnectedness points to the other big advantage of megasatellite living, Janhunen said: New habitat cylinders could be added onto the edges of the colony indefinitely, allowing for near unlimited expansion.

“Mars’ surface area is smaller than Earth’s, and consequently it cannot provide room for significant population and economic expansion,” Janhunen told Live Science. A Ceres colony, on the other hand, “is growable from one to millions of habitats.”

Beyond the cylinders and their massive disk frame, the colony’s main features will be two enormous glass mirrors, angled at 45 degrees relative to the disk in order to reflect just enough natural sunlight into each habitat. Part of each cylinder will be devoted to growing crops and trees, planted in a 5-foot-thick (1.5 meters) bed of soil derived from raw materials from Ceres, Janhunen wrote. The natural sunlight should keep them growing strong. (The “urban” part of each cylinder, meanwhile, would rely on artificial light to simulate an Earth-like day/night cycle. Janhunen does not stipulate where the settlement’s oxygen comes from.)

Related: 10 interesting places in the solar system we’d like to visit

This society of floating, cylindrical utopias may sound a bit outlandish, but it has its proponents. In 2019, Jeff Bezos (Amazon CEO and founder of the private space company Blue Origin) spoke at a Washington, D.C., event about the merits of building “O’Neill colonies” similar to the one Janhunen describes here. Bezos was skeptical that such a colony could exist in our lifetime, asking the audience, “How are we going to build O’Neill colonies? I don’t know and no one in this room knows.”

However, Janhunen is more optimistic. In an email to Live Science, he said that the first human settlers could start heading to Ceres within the next 15 years.

Next year on Ceres?

Manasvi Lingam, an assistant professor of astrobiology at the Florida Institute of Technology who studies planet habitability, said that the Ceres proposal presents a “plausible alternative” to colonizing the surface of Mars or the Moon, but still lacks some key considerations.

“I would say there are three main caveats,” Lingam, who was not involved with the paper, told Live Science. “The first is a question of other essential elements, other than nitrogen.”

One key element that isn’t mentioned in the paper is phosphorus, Lingam said. The human body relies on phosphorus to create DNA, RNA and ATP (a vital form of energy storage in cells). All organisms on Earth — including any plants colonists might hope to grow in their floating habitats — need it in one way or another, but Janhunen’s proposal doesn’t address where or how this critical element would be obtained.

The second caveat is the technology, Lingam said. Collecting nitrogen and other raw materials from Ceres would require mining the planet’s surface and extracting those crucial elements from the rocks themselves. This operation likely wouldn’t be possible without a fleet of autonomous mining vehicles ready to deploy on Ceres, plus satellites to guide them to the most viable nutrient-rich deposits. The idea is plausible, Lingam said, but technologically, we aren’t there yet; just recently (on Jan. 15), a NASA Mars robot was declared dead after it failed to bury itself just 16 feet (5 meters) into the Martian surface, terminating a two-year mission.

Those technological limitations point to Lingam’s third caveat, which is the proposed time frame. Janhunen’s proposal suggests that the megasatellite’s first cluster of orbiting habitats could be completed 22 years after mining begins on Ceres. But this estimate assumes the settlement’s available power supply grows exponentially each year, beginning immediately and never stalling due to technological or logistical problems. That estimate “isn’t inconceivable,” Lingam said, but shouldn’t be taken for granted.

“That timescale of 22 years might be the lower bound under optimal conditions, but I’d argue that the real timescale could be a lot longer,” Lingam said.