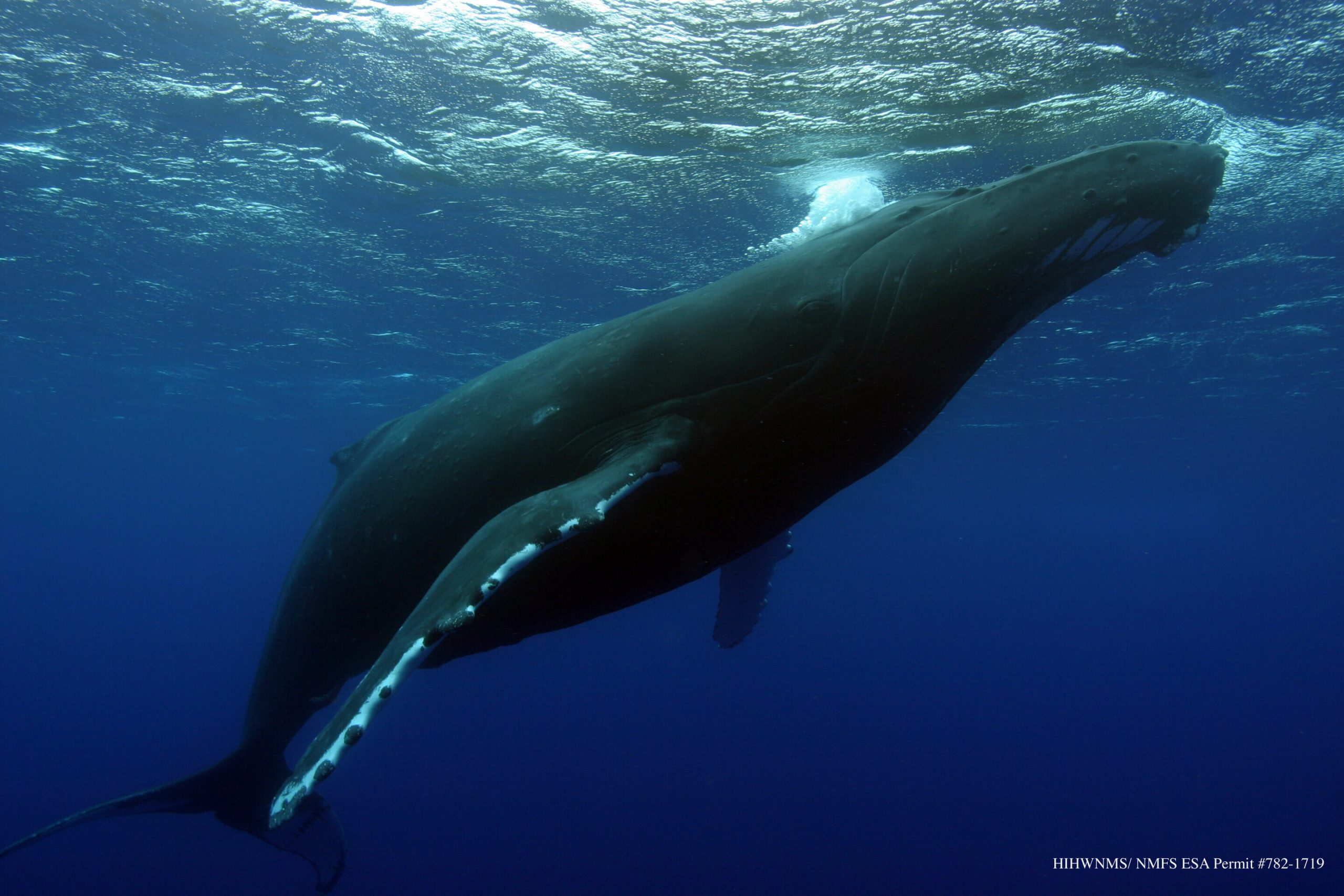 Approximately 8,000-12,000 of the North Pacific humpback whale stock visits the shallow waters of the Hawaiian Islands seasonally to breed. During this time, mature males produce an elaborate acoustic display known as “song,” which becomes the dominant source of ambient underwater sound between December and April. Following reports of unusually low whale numbers that began in 2015-16, researchers at the University of Hawaii at Mānoa in collaboration with the Hawaiian Islands Humpback Whale National Marine Sanctuary, Oceanwide Science Institute and Woods Hole Oceanographic Institution, examined song chorusing recorded through long-term passive acoustic monitoring at six sites off Maui, as a proxy for whale populations between September 2014 and May 2019. The findings were published in Endangered Species Research.

Over the course of the season, RMS SPL levels mirror the whales‘ migratory patterns. Levels increase starting in November through January when whales start arriving in the waters around the archipelago, peaking in February and March, before decreasing in April through May when whales start migrating back to their high-latitude feeding grounds. Researchers compared overall differences of this pattern and monthly averages of RMS SPL levels among years.

“Between the 2014-15 and 2017-18 seasons, we saw a continuous decrease in overall chorusing levels during the peak months of February and March of between -3 and -9 dB depending on location over the course of this four-year period,” said Anke Kügler, a Ph.D. candidate in marine biology, research assistant at the Hawaii Institute of Marine Biology and lead author of the paper. “Only in the 2018-19 season did levels increase again, reaching 2015-16 at most and even 2014-15 levels at some recording sites. Further, we saw a shift in the seasonal pattern, with peaks shifting to early- and mid-February from late February to early March. Overall, chorusing levels were not only significantly lower during the peak of the season, whales also appeared to depart the islands earlier than in the past.”

Acoustic energy decreased by more than 50%

When anecdotal reports from the on-water community initially showed lower numbers of whales in 2015-16, this coincided with an El Niño event in the North Pacific. Researchers did not expect to see a decreasing trend for the subsequent two seasons, before chorusing levels seemed to bounce back in 2018-19.

Further, a decrease of acoustic energy -6 dB means a decrease by 50%. While this does not automatically translate into half the number of whales, other researchers visually assessed numbers of mother-calf pairs off Maui and overall whales off Hawaii Island, and reported seeing declines of similar magnitude during the same time, indicating that researchers captured changes in population levels, not just changes in singing behavior.

“The Hawaii ‘distinct population segments’ has been delisted from the Endangered Species Act in 2016, assuming sustainable levels after decades of population increase,” said Kügler. “However, in light of global change, continued monitoring is necessary to detect potential negative changes early and implement mitigation and adjust protection measures within Hawaiian waters, if necessary.”

Humpback whales are considered charismatic megafauna that hold a unique place in society, particularly modern Hawaiian culture. Further, whale watching is an important economic resource in Hawaii. As such, humpback whales are what is called a “flagship species.” They have the potential to be the ambassador species for the entire region’s ecosystem by helping to raise awareness of threats and global change impacts, on them and other species they share their habitat with, as well as their migration areas.

“In addition, this collaborative project highlights and strengthens UH’s existing long-term connection to NOAA,” added Kügler. “I was able to do this research due to this close partnership and collaboration with NOAA and the Hawaiian Islands Humpback Whale National Marine Sanctuary.”