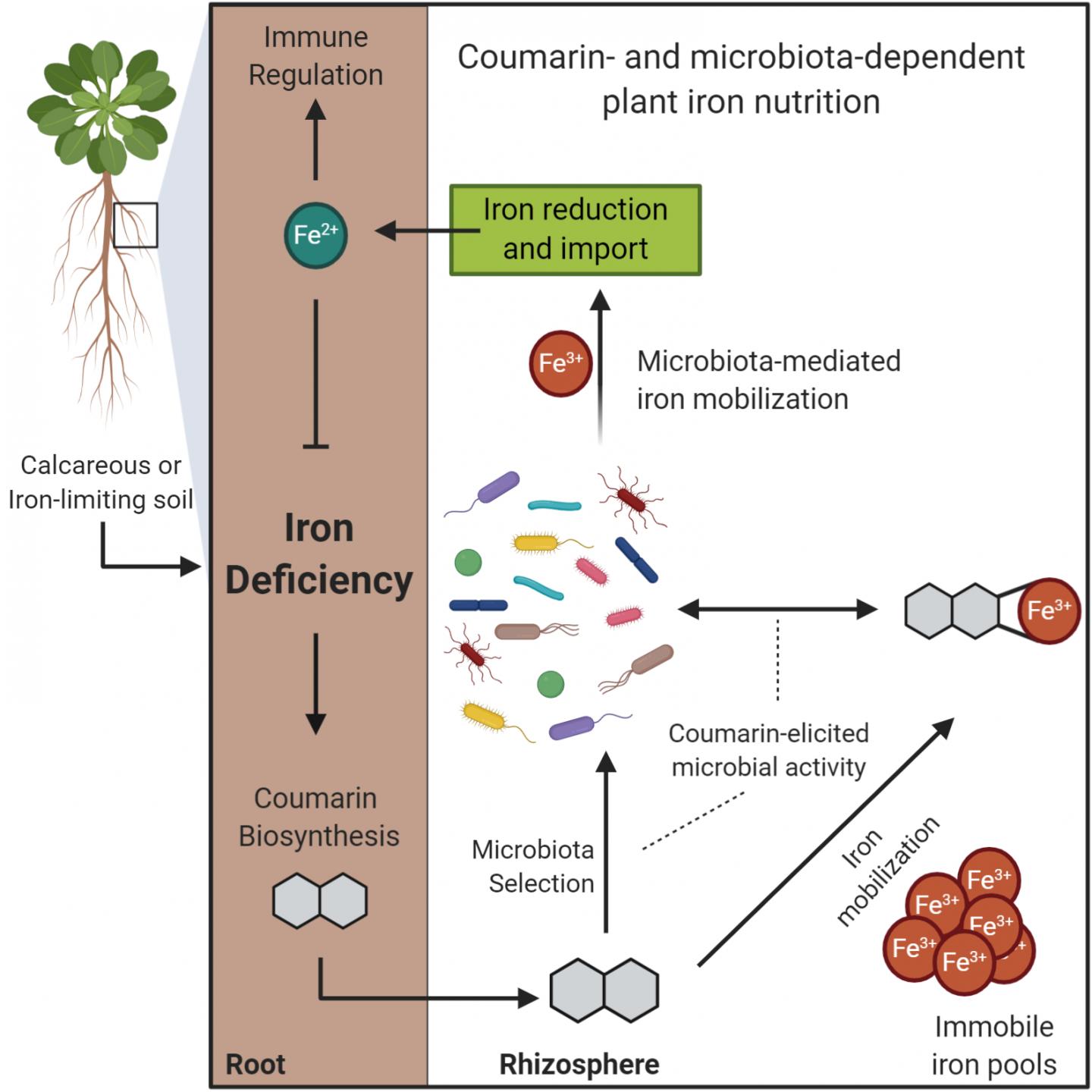 In nature, healthy plants are awash with bacteria and other microbes, mostly deriving from the soil they grow in. This community of microbes, termed the plant microbiota, is essential for optimal plant growth and protects plants from the harmful effects of pathogenic microorganisms and insects. The plant root microbiota is also thought to improve plant performance when nutrient levels are low, but concrete examples of such beneficial interactions remain scarce. Iron is one of the most important micronutrients for plant growth and productivity. Although abundant in most soils, iron’s poor availability often limits plant growth, as it is found in forms that cannot be taken up by plants. Thus, adequate crop yields often necessitate the use of chemical fertilizers, which can be ecologically harmful in excessive application. Now, MPIPZ researchers led by Paul Schulze-Lefert have uncovered a novel strategy employed by plants to overcome this problem: they release substances from their roots that direct plant-associated bacteria to mobilise soil iron so that plants can easily take it up.

When confronted with iron in unavailable forms, plants mount a compensatory response to avoid iron deficiency. This starvation response involves extensive reprogramming of gene expression and the production and secretion of coumarins, aromatic compounds that are discharged from plant roots and which themselves can improve iron solubility. Interestingly, it was recently shown that coumarins are a selective force, shaping the composition of plant-associated bacterial communities. Now, it emerges that some coumarins also act as an “SOS” signal that prompts the root microbiota to support plant iron nutrition.

To first assess the contribution of the root microbiota to iron-limiting plant performance, first-author Christopher Harbort and colleagues used a controlled system which allowed them to regulate the availability of iron as well as the presence of root-associated bacteria. Using the laboratory model thale cress, they compared plants completely lacking bacteria and ones with an added synthetic community (SynCom) of bacterial commensals which reflects the root bacterial diversity observed in nature. The authors found that addition of this bacterial SynCom strongly improved the performance of plants grown on unavailable iron but not those grown with iron that was readily available. Growing plants in associations with single bacterial strains allowed them to determine that this iron-rescuing capacity is widespread among bacteria from different bacterial lineages of the root microbiota. When the researchers performed the same experiments with plants compromised in the production or secretion of coumarins, the community of bacteria provided no benefits. Thus, they could show that plant-secreted coumarins are responsible for eliciting nutritional assistance from bacterial commensals under iron limitation.

The authors’ findings strongly suggest that the root microbiota is an integral part of how plants adapt to growth in iron-limiting soil. Furthermore, by identifying the plant-to-microbe signal for assistance, this research brings us one step closer to harnessing naturally present soil bacteria as a substitute for synthetic fertilizers. Improving plant iron nutrition could not only improve agricultural yields, but also increase the nutrient content of staple food crops, a potential strategy for tackling iron deficiency in humans as well.