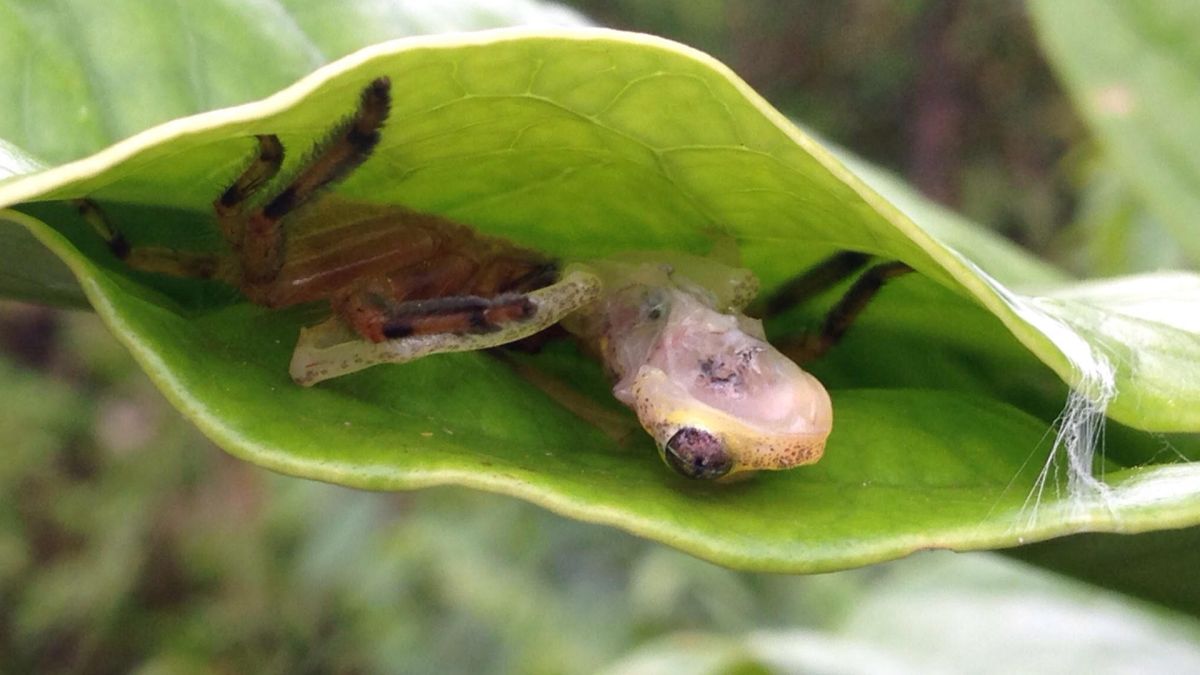 Huntsman spiders in Madagascar eat tiny frogs, and scientists suspect that the spiders catch their prey by weaving “traps” made of leaves, to lure the frogs inside with a promise of protection from the sun.

In 2017, researchers spotted a spider in the Damastes genus clutching a Heterixalus andrakata tree frog — the second time that Madagascar spiders have been seen eating frogs. The spider was enjoying its meal while crouching inside a pocket crafted from two leaves that were still attached to a tree; the leaves’ edges were sealed together with spider silk, leaving a small opening.

The scientists later found three more spiders huddled inside such makeshift leaf shelters. Though none of them was snacking on a frog, the earlier find suggests that the spiders build these leaf pockets so they can ambush frogs looking for a shady retreat.

Related: In photos: Fish-eating spiders around the world

Spiders around the world devour up to 880 million tons of insects each year, but animals with backbones can also end up on an arachnid’s dinner menu. Tropical spiders eat lizards, fish, frogs and mammals, causing “a surprising amount of death” among small vertebrates in the Peruvian Amazon, Live Science previously reported. Bat-eating spiders live on every continent except Antarctica, and viral photos have shown the diversity of spider prey, including a tadpole in western India; a pet goldfish in South Africa; and even a pygmy possum in Southern Tasmania.

H. andrakata frogs measure up to an inch (32 millimeters) long, which is slightly bigger than the Damastes spiders that hunt them, said Dominic Martin, a researcher in the department of Biodiversity, Macroecology and Biogeography at the University of Göttingen in Germany. Martin co-authored a study describing the spiders’ leaf traps, published online Dec. 11, 2020, in the journal Ecology and Evolution.

The researchers discovered the frog-eating spider hiding between a pair of silk-woven leaves, its fangs buried deep in a frog’s head. The frog wasn’t moving and was presumed to be dead. Four more frogs — still living — were found near the tree, according to the study.

Later in 2017 and in 2018, Martin and his colleagues found three more spiders crouching in similar leaf retreats in different types of trees. Leaves were woven together at the sides with silk and had an opening at the base near the stem, perhaps “enabling prey climbing up the stem of the tree to enter,” the study authors reported.

Spiders are known to build retreats in which they can hide from their own predators, and where they wait for potential prey to pass by. However, the behavior of the huntsman caught in the act with a frog meal suggests that these spiders may be weaving leaves “as a trap to catch frogs seeking shelter during daytime,” Martin told Live Science in an email.

“The frogs may be tempted to hide between the neatly joined leaves in an attempt to avoid dehydration and predation from, for example, birds,” he said.

Confirming this type of hunting technique — and whether the trap is targeted at amphibians or insects and other invertebrates — would require cameras monitoring the spiders as they build their traps, wait inside them and finally capture their prey, Martin said. However, spiders can go for days without food, “so recording such ‘rare’ events is really difficult,” he added.