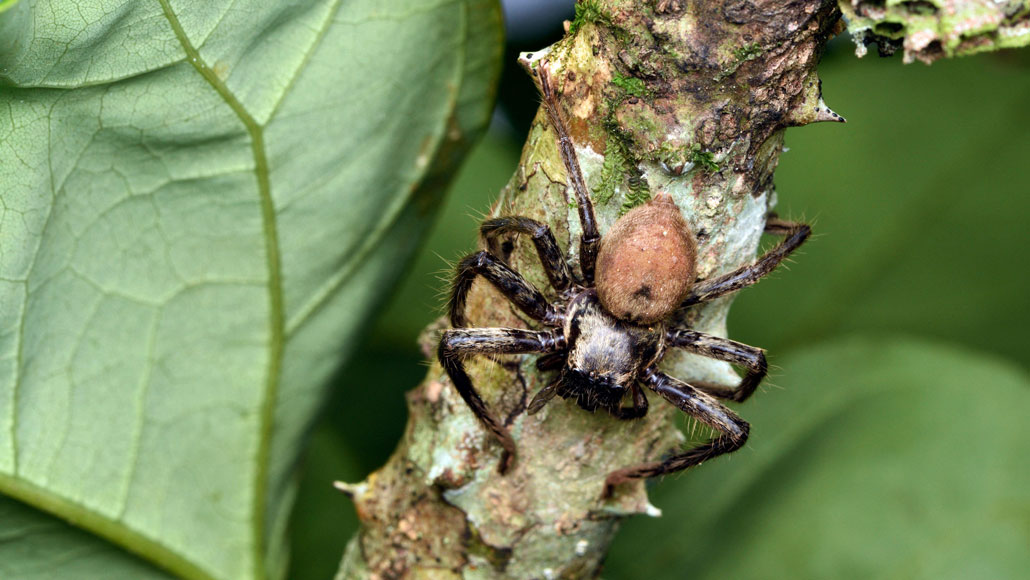 On a sweltering afternoon in northeastern Madagascar, the coolness of a leaf’s shade is an attractive respite for a frog. But some of these oases may hide hungry architects: huntsman spiders.

New observations show that the gangly spiders partially attach two leaves together using silk, creating a leafy hollow. One of the arachnids was spotted eating a frog inside one of the pockets, suggesting that the spiders create the structures to lure and trap frogs, researchers report December 11 in Ecology and Evolution.

In 2017 and 2018, biologist Thio Rosin Fulgence and colleagues were conducting an ecological survey in Madagascar when Dominic Martin, an ecologist at the University of Göttingen in Germany, spotted a large huntsman spider (Damastes sp.) eating a small Madagascar reed frog (Heterixalus andrakata). The spider was on a small tree, near a pair of overlapping leaves that had been attached together with spider silk to create a pocket. Upon approach, the spider backed into its leafy lair, amphibian prize in tow.

“The first time that we found this phenomenon, we were very excited,” says Fulgence, of the University of Antananarivo in Madagascar. The next year, while conducting reptile and amphibian surveys in roughly the same region, Fulgence found three more of the spiders hiding in similar leaf retreats. These spiders weren’t spotted with prey, he says.

Some spiders are known to prey on larger and stronger vertebrates such as a mouse opossum and even frogs, if given the opportunity. (SN: 2/28/19). When that happens, the arachnids are commonly seen as winning the vertebrate jackpot. But huntsman spiders, in contrast, may be specifically targeting frogs as prey, the researchers say. By attaching the leaves together, the spiders are creating cool and dark microhabitats that would be desirable in a dry, searing environment with plenty of predatory birds, Fulgence says.

Still, these spiders could simply be hiding in the leafy retreats and ambushing prey passing by, not using the structures as traps, says Stano Pekár, a behavioral biologist at Masaryk University in Brno, the Czech Republic, who was not involved with the research.

That’s true, agrees Jose Valdez, a conservation biologist at the German Centre for Integrative Biodiversity Research in Leipzig. But “what makes me think otherwise is that not only did the researchers find [the leaf retreats] multiple times, but that the spider was weaving the edges of the leaves,” says Valdez, who was not involved with the study. “I would think there would be much easier places for these spiders to hide in a forest.”

Part of the reason for the uncertainty is that the spider spotted eating a frog was first seen outside its leaf pocket as the arachnid was consuming its prey. “Only detailed observations and experiments” can confirm if the leaves are a frog trap, says Rodrigo Willemart, a zoologist at the University of São Paulo, who also was not involved in the research.

If so, such a tool could be unique among spiders, Willemart says. “I don´t know of papers that have reported on traps built by spiders specifically for capturing vertebrates.”