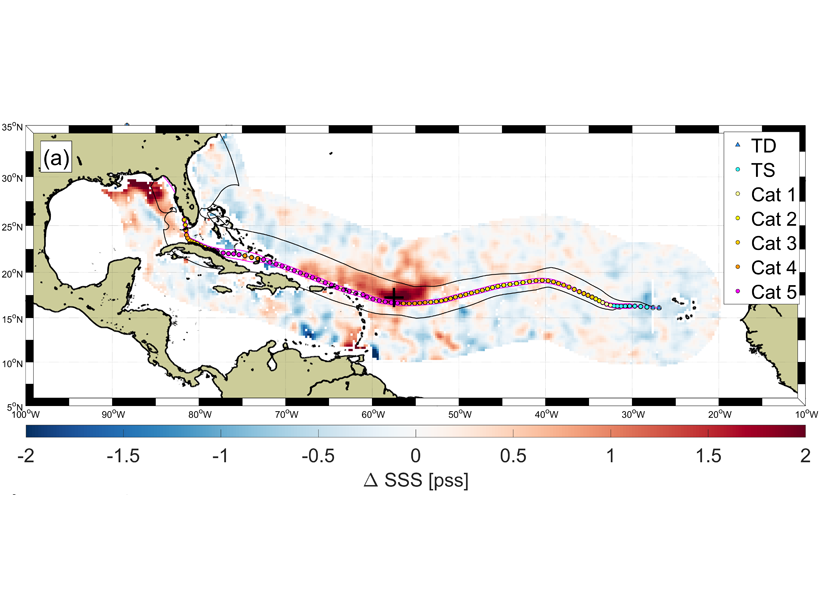 Hurricanes (known as tropical cyclones in the Pacific) often form in response to above average ocean surface temperatures. But they are also well known to leave a cold wake after their passage mainly because the strong winds stir and upwell the colder water that lies below the surface layer. While one might expect the heavy rainfall associated with hurricanes to freshen the near surface salinity, this effect can be somewhat mitigated as the upwelled water in response to the storm is often saltier than that found at the near surface (see figure above).

Reul et al. [2021] used a 10-year time series of remotely sensed sea surface salinity and other data to construct climatological composites of the salinity response to hurricanes as a function of the storm wind strength, speed, and width. They found that the salinification effect is particularly amplified for storms in higher hurricane categories 4-5 and also for slower moving storms. Similar to the cold wake, the salty wake is strongest on the right-hand side in the Northern Hemisphere moving in the direction of the storm path (see figure) because that is where rotational sense of the cyclonic low pressure system aligns with the response of the ocean currents.

Given that the number of Category 4-5 hurricanes are predicted to increase in a warming world, the correct representation of both the salinity and temperature conditions in coupled hurricane forecast models might be judicious in order to improve hurricane predictions.