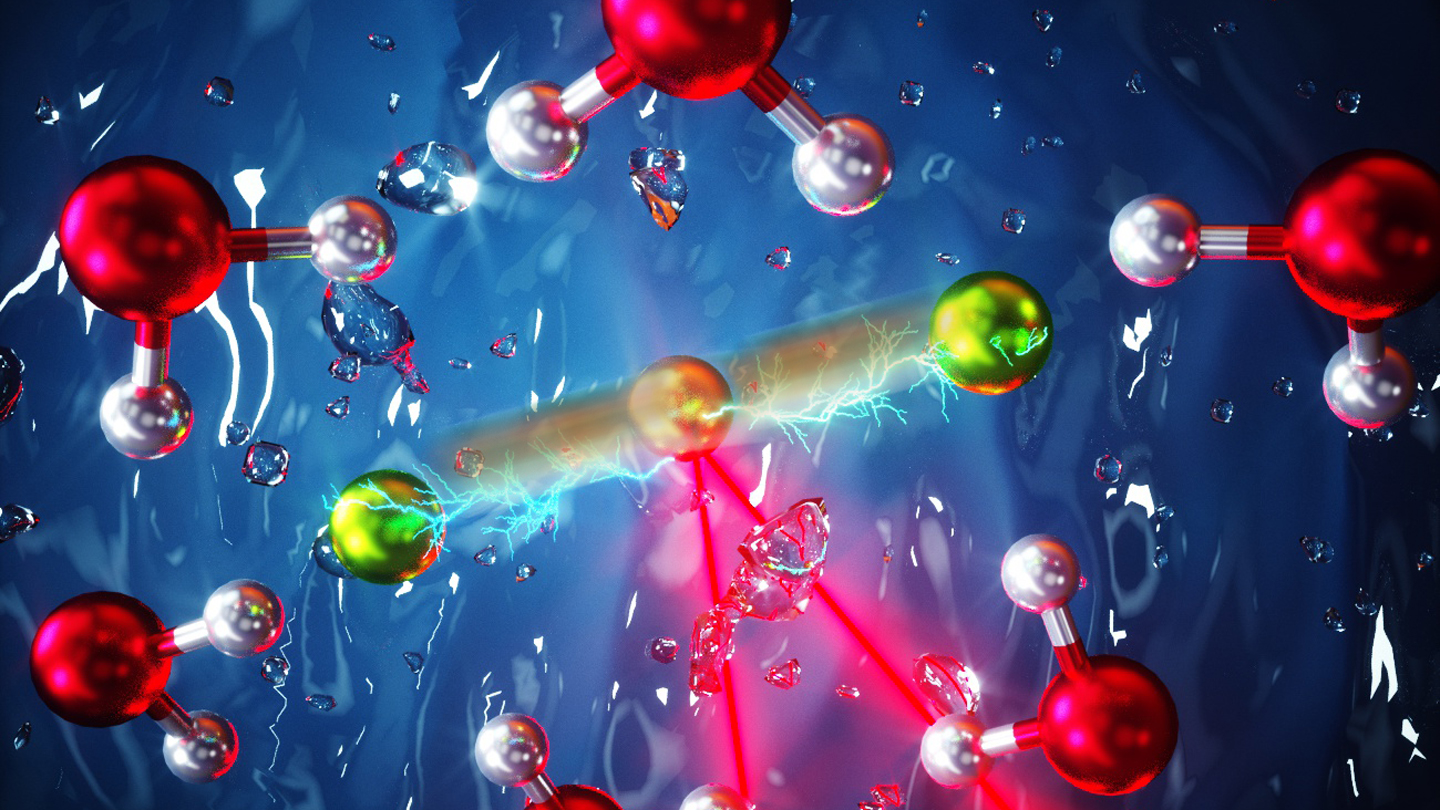 Chemistry students the world over are familiar with covalent bonds and hydrogen bonds. Now a study has revealed a strange variety of bond that acts like a hybrid of the two. Its properties raise questions about how chemical bonds are defined, chemists report in the Jan. 8 Science.

Hydrogen bonds are typically thought of as weak electrical attractions rather than true chemical bonds. Covalent bonds, on the other hand, are strong chemical bonds that hold together atoms within a molecule and result from electrons being shared among atoms. Now, researchers report that an unusually strong variety of hydrogen bond is in fact a hybrid, as it involves shared electrons, blurring the distinction between hydrogen and covalent bonds.

“Our understanding of chemical bonding, the way we teach it, is very much black and white,” says chemist Andrei Tokmakoff of the University of Chicago. The new study shows that “there’s actually a continuum.”

Tokmakoff and colleagues characterized the hybrid bond by observing groups of atoms called bifluoride ions, consisting of a single hydrogen atom sandwiched between a pair of fluorine atoms, in water. According to conventional wisdom, the hydrogen atom is bound to one fluorine by a covalent bond and to the other fluorine by a hydrogen bond.

The researchers used infrared light to set bifluoride ions vibrating and measured the hydrogen atoms’ response, revealing a series of energy levels at which the hydrogen atoms vibrated. For a typical hydrogen bond, the spacing between those energy levels would decrease as the atom climbed further up the energy ladder. But instead, the researchers found that the spacing increased. This behavior indicated that the hydrogen atom was shared between the two fluorine atoms equally, rather than being closely bound to one fluorine atom by a covalent bond and more loosely bound by a typical hydrogen bond to the other. In that arrangement, “the difference between the covalent and [hydrogen] bond is erased and is no longer meaningful,” says study coauthor Bogdan Dereka, a chemist also at the University of Chicago.

Computer calculations showed that this behavior is dependent on the distance between the two fluorine atoms. As the fluorine atoms move closer to each other, squeezing the hydrogen between them, the normal hydrogen bond becomes stronger, until all three atoms begin sharing electrons as in a covalent bond, forming a single link that the researchers call a hydrogen-mediated chemical bond. For fluorine atoms that are farther apart, the conventional description, with distinct covalent and hydrogen bonds, still applies.

The hydrogen-mediated chemical bond can’t be described as either a pure hydrogen bond or a pure covalent bond, the researchers conclude. “It’s really some hybrid of the two,” says chemist Mischa Bonn of the Max Planck Institute for Polymer Research in Mainz, Germany, who coauthored a perspective piece on the study, also published in Science.

Hydrogen bonds occur in a variety of substances, most famously in water. Without hydrogen bonds, water at room temperature would be a gas instead of a liquid. While most hydrogen bonds in water are weak, strong hydrogen bonds similar to the ones found in the bifluoride ions can form in water that contains excess hydrogen ions. Two water molecules can sandwich a hydrogen ion, creating what’s called a Zundel ion, in which the hydrogen ion is equally shared between the two water molecules. The new results echo the Zundel ion’s behavior, says chemist Erik Nibbering of the Max Born Institute for Nonlinear Optics and Short Pulse Spectroscopy in Berlin, who coauthored a 2017 paper in Science on the Zundel ion. “It all fits nicely.”

Strong hydrogen bonds are thought to play a role in transporting hydrogen ions, a process crucial for a variety of biological mechanisms including powering cells and for technologies such as fuel cells. So better understanding these bonds could shed light on a variety of effects.

And the new observation has implications for how scientists understand basic principles of chemistry. “It touches on our fundamental understanding of what a chemical bond is,” Bonn says.

That newfound understanding of chemical bonding also raises questions about what qualifies as a molecule. Atoms connected by covalent bonds are considered part of a single molecule, while those connected by hydrogen bonds can remain separate entities. So bonds in limbo between the two raise the question, “when do you go from two molecules to one molecule?” Tokmakoff says.